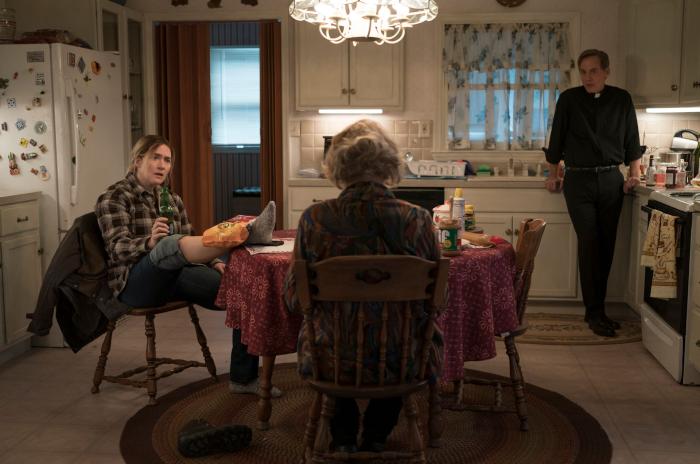 There’s a fine line between a cleverly constructed mystery brimming with suspects and an overstuffed one that relies on piles of coincidences. In the case of Mare of Eastown, Mare will soon discover that the circumstances of two murders and a disappearance are converging around her, and not entirely because she’s Easttown’s apparently sole detective.

This is small-town life, and as someone who sees at least four people I know every single time I go to the grocery store and I live in a small city, I completely understand how these coincidences can mount. It’s a small world as it is, and when your entire world has a population of 10,000, of course, your daughter is going to be at the high-school party where a high-school murder victim was last seen.

Such is the case in this week’s episode when Mare learns that her daughter, Siobhan, was in the woods with Erin when Brianna — the girlfriend of Erin’s ex — cold-cocked Erin, which was captured in a video that went small-town viral (probably 600 views!). Brianna becomes an immediate suspect and despite the wishes of Mare’s new partner, Evan Peters’ Detective Colin Zabel — in a charmingly subdued role — Mare decides to arrest Brianna in a public restaurant where Brianna is working as a server. Even if she isn’t the killer, Mare seems to reason, she deserves a little public shaming for punching Erin.

That lead doesn’t go very far — Brianna wisely asks for a lawyer, and she’s way too obvious to be the killer — but obviousness is not a deterrent for Kenny McMenamin, who doesn’t play by the rules of mystery novels. He appropriately loses his sh*t with grief when he discovers that his daughter is dead. He found out from Mare, who brought along Kenny’s cousin, who is married to Mare’s best friend and high-school classmate, Lori, because small towns are small.

Kenny, however, refuses to let the arc of the universe slowly bend toward justice and decides, instead, to take it into his own hands and drives Dylan, the supposed father of Erin’s baby, out into the middle of the woods and shoots him in the back twice, leaving him (presumably) for dead. (Dylan is a dirtbag, but him uttering, “I’m just a kid” before Kenny shot him still gutted me).

But this is why, folks, we wait for investigations to complete themselves before we resort to vigilante justice. It’s very unlikely that Dylan killed Erin, and now Kenny is going to have to go to prison for killing an innocent kid, and what a mess Mare is going to have to clean up now! Winslet is so good here that we can actually feel Mare carry the burdens of an entire town, which also gives her less patience when Richard Ryan doesn’t immediately come to her when she arrives at the party he invited her to (and that is why Richard Ryan does not get laid that night).

Mare’s mess, however, is going to get a lot messier when she finds out that Dylan may not be the father of Erin’s baby. Earlier in the episode, Mare asks her ex-husband Frank — with whom she shares custody of a grandson after their son Kevin’s suicide two years prior — if he knew Erin. Frank — played by Roy from The Office in full-on trust-me-I’m-harmless mode — says she was quiet and he didn’t know her that well. However, that contradicts the bombshell that arrives at the end of the episode, when Jess — Erin’s best friend — reveals to Lori (who seems to be at the center of everything) that she thinks Frank is the father of Erin’s baby. DAMNIT, ROY!

If you’re compiling suspects, Frank Sheehan supplants dead Dylan on the top of the list. However, with 5 more episodes to go, I suspect that Frank’s life will be (appropriately) ruined for sleeping with a student, but I doubt that he’s responsible for her death. Maybe they didn’t sleep together. Maybe Jess doesn’t know what she’s talking about. Maybe Erin just confided in her math teacher because either Deacon Mark or Father Dan were being inappropriate with her. You don’t introduce a Father or a deacon into a story, after all, without returning to them at some point — it’s Checkhov’s Clergyman.

It should be noted, too, that the name of the episode was “Fathers,” and fathers played a big role in the episode. Erin’s father murdered the supposed father of Erin’s baby, while Jess revealed that Frank — the father of the late Kevin and the rebellious Siobhan — is the actual father of Erin’s child. But don’t sleep on Father Dan Hastings, either, who also happens to be Mare’s cousin, because Easttown really is that small. Besides, you don’t hire Neal Huff — the Neal Huff — to just stand around, wash dishes, and offer words of comfort.