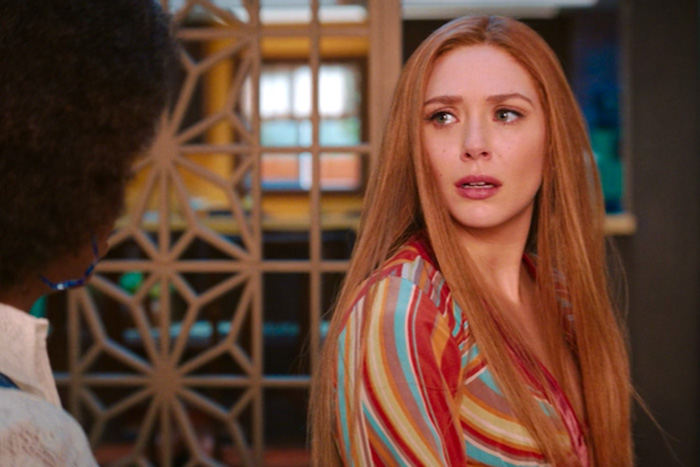 Is 'WandaVision' About an Avenger Breaking Bad? Maybe!

I don’t want to speak for the entire internet, but it definitely feels like WandaVision viewers welcomed this week’s reprieve from the sitcom premise as the fourth episode, “We Interrupt This Program,” focused on the characters and events unfolding outside of the weird Nick at Nite revival that’s been dominating the series. It was basically a full-on return to the Marvel Cinematic Universe that allowed everyone to come up for air and have everything that’s been happening on the show carefully spoon-fed to them. With that in mind, I want to give a shout out to Andrew whose latest column on the MCU conditioning its audience seems downright prescient as hell right now.

Here’s what Andrew wrote: “There is a tendency to explain everything to the audience. Instead of allowing moments to breathe and nuance to be key, characters often just … say exactly what they’re thinking and what they want. To the letter.”

Considering the fourth episode of WandaVision practically sat the audience down and used hand puppets to walk them through the past three episodes, I’m going to start hitting Andrew up for lotto numbers because my dude is a Nerd Nostradamus over here. Anyway, let’s talk about what “We Interrupt This Program” revealed, which was a whole lot, and what it quietly hinted at that, hopefully, doesn’t lead to a big cop-out down the road even though that’d be entirely on-brand for Marvel.

The Story in a Nutshell

For the past three episodes, WandaVision has been mimicking old sitcoms from the ’50s and ’60s with very heavy-handed hints that, scientifically speaking, something is very f*cked up. For starters, Vision died during Avengers: Infinity War, and not from the Snap, which was reversed in Avengers: Endgame in an event that’s now referred to as — goddammit… — The Blip. No, Vision got his android head caved in when Thanos ripped the Mind Stone out of his skull, and he should be very dead when the events of WandaVision are occurring. Instead, he’s in the town of Westview playing a bumbling sitcom husband to Wanda’s housewife who seems to be “rewinding” reality whenever there’s a crack in the TV Land facade. Also, they’re super horny, which results in Wanda birthing twins in Episode 3 despite only being pregnant for 12 hours. A fact that Vision notices along with the strange behavior of his neighbors while Wanda is in labor.

That brings us to Geraldine (Teyonah Parris). After helping Wanda give birth and getting the twins settled in their cribs, Geraldine suddenly has a lucid moment where she’s no longer acting like a sitcom character. It happens when Wanda mentions her brother Pietro while singing an old Sokovian lullably, which causes Geraldine to mention that he was killed by Ultron. Wanda is clearly not a fan of this outside trauma entering the sitcom world of Westview, and that’s when she notices Geraldine’s necklace has the SWORD emblem on it, which does not lower the high levels of pissed off radiation. The audience doesn’t see what happens next, but Geraldine is gone as Vision comes back inside following an ominous interaction with Agnes (Kathryn Hahn) and Herb (David Payton) in the front yard.

Now’s the part where Episode 4 bursts through the wall with a big, dumb Kool-Aid head full of answers, and I just want to say that if you’ve been confused by the events of WandaVision up until now, you were supposed to be! The writers have been Mystery Box-ing the hell out of this thing. As for whether or not that creative choice lends itself to a weekly streaming release is definitely wide open for debate. I’ve been enjoying the show for the most part, but I’d be lying if I said I wasn’t relieved not to sit through another week of the sitcom schtick. (Film Crit Hulk has been doing some great writing on how Marvel severely underestimated the skill involved in making a sitcom, and it shows.)

In a fantastic opening scene that makes a deliberate visual reference to House of M — we’ll circle back to that — Geraldine gets un-Snapped in a hospital room and starts frantically searching for her mother. It’s during these chaotic moments that Geraldine is revealed to be Monica Rambeau the daughter of Captain Marvel’s best friend Maria Rambeau. But just as we’re learning Monica’s true identity, she’s learning that her mother died of cancer during the five years that Monica was Snapped. Or Blipped. Have I mentioned these phrases suck?

After the events of Captain Marvel, Monica’s mother understandably became concerned with alien invasions and formed SWORD. Think SHIELD, but in space. Monica was supposed to take over the organization but again, she got Blip-Snapped, so now some other dude runs it. Monica also can’t go on space missions now because her mom made very specific protocols that if anyone who disappeared from the Snap returned, they were banned from going into space. (I’m like 95% positive the purpose of this exchange is to start planting seeds for Secret Invasion.) But what Monica can do is help the FBI with a strange missing persons case in Westview, New Jersey, and here’s where the answers start tumbling out like crazy as we get an outside view of what happened in the days before Monica/Geraldine got tossed out of the sitcom world.

When is WandaVision occurring? Three weeks after Endgame!
What was up with the helicopter Wanda found in Episode 2? A SWORD drone!
Why was Monica in Westview? She touched the magic force field thingy and got sucked in like an idiot!
Who was watching the TV monitor in Episode 1? Darcy from Thor!
Is the Beekeeper some cool-ass villain? Nope! It’s just some rando SWORD dude!
Who was trying to talk to Wanda through the radio? Randall Park as FBI Agent Jimmy Woo from Ant-Man and the Wasp!
What’s with the whole sitcom thing? …. OK, they don’t fully explain that one!
But Darcy and Jimmy can sit there and watch WandaVision just like we are? Pretty much!
How did Geraldine get tossed out of Westview? Wanda blasted her right out with her magic!
Holy shit, Wanda is the villain? The show would really like you to believe that!

So What Happens Now?

I’m not going to get into the myriad of WandaVision fan theories floating around because there are hundreds of them. Marvel fans are expecting this show to do all kinds of nerdy wish list items like open the door for the X-Men or the Fantastic Four, and those things are certainly on the table. We’re dealing with a show where the main character can alter reality at whim, so the options are limitless. Marvel can literally do anything from retconning character’s origins to retconning its entire cinematic universe. Infinity War and Endgame broke reality twice and threw time travel into the mix, so there are huge storytelling cracks for shit to go wild.

That said, I don’t think WandaVision is going to deliver the treasure trove of nerd goods that fans are expecting, but I am more convinced that the show is not going to play it as “safe” as I’ve been expecting. What changed my mind? The Vision jump scare. Until now, I assumed WandaVision would be confined by the limitations of being a PG-rated Marvel show on Disney+. But, Christ, that moment was so well done and jarring that it now feels like WandaVision won’t be an entirely cookie-cutter experience. Although, that can change as we get into the “villain” problem.

In the very first moments of Episode 4, Geraldine/Monica is restored to reality piece by piece, and the design of those pieces are a direct visual reference to the comic book storyline House of M. Without giving too much away and potentially spoiling WandaVision, House of M revolves around Wanda having a mental breakdown and tapping into god-like powers to completely rewrite the reality of the Marvel Universe. For the first time, House of M showed that Wanda is probably the most powerful and dangerous mutant alive. (In the comics, Wanda and Pietro are the children of Magneto, but that has changed with the wind over the years just like their status as heroes or villains.) WandaVision seems to be pulling heavily from House of M. Although, clearly, not on that grand of a scale. Yet.

In interviews, Marvel Studios head Kevin Feige has been eager to note that Wanda was single-handedly wrecking Thanos in Endgame, and that her powers are far greater than anyone knows. Including herself. With Episode 4 flashing a neon sign that Wanda is the “villain” of the show, we veer even deeper into House of M territory and the possibility that we could be witnessing an Avenger breaking bad, which is something the MCU has yet to attempt. We’ve seen plenty of characters go the other direction like Loki, The Winter Soldier, and Nebula. But it will be interesting to see if Marvel can pull off going the other way — if that’s even where WandaVision is heading.

While WandaVision is now fully aiming the audience’s suspicions at Wanda, there have been clever hints that Kathryn Hahn’s Agnes is not an innocent bystander like the other residents of Westview. That became pretty evident during Episode 3 when she stopped Herb from revealing to Vision some vital secret about the town, and it continued into Episode 4 even though Agnes was criminally absent this week. I mean, look at this: 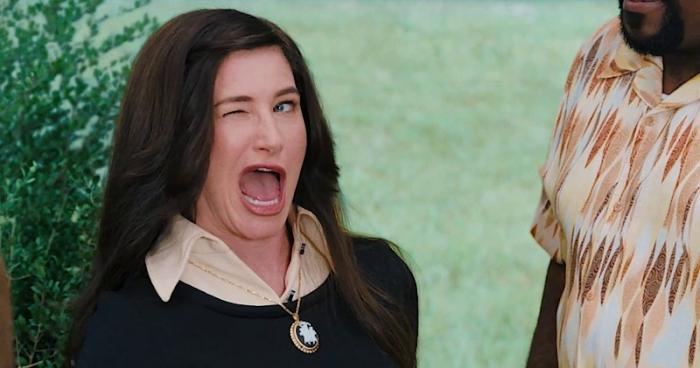 Whenever Agnes isn’t winking on screen, all the other characters should be asking, “Where’s Agnes winking?”

Back to the point, while Agnes isn’t featured in the latest episode, there is still a deliberate moment hinting at a mystery behind her character. During a SWORD briefing, all of the residents in Westview are shown to be real people with corresponding IDs. Except for Agnes. (Emma Caulfield’s Dottie is missing from the board completely.) There are nerd theories about which Marvel character Hahn is secretly playing that are probably correct, but the bigger issue is that there are signs that Wanda isn’t really the villain of the story. She’s certainly causing the events in Westview as she grapples with the endless trauma in her life, but there’s intentional groundwork being laid that could easily let Marvel go the “safe” route and reveal that Wanda is being exploited by sinister forces.

Will Wanda being manipulated be as interesting as watching Marvel embrace her complicated history as both a hero and a villain? I honestly don’t know. After this week’s episode, I’m definitely even more intrigued to see where WandaVision is going, and again, that Vision jump scare was some twisted shit. If we start to see more creative boldness like that, awesome. If the show just sets up the big bad for Doctor Strange 2… cool, I guess?