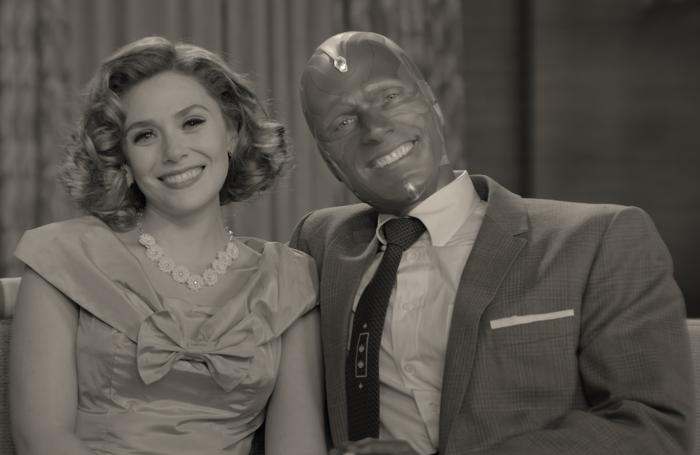 The Marvel Cinematic Universe has finally entered Phase Four with WandaVision, which is also now the first original Marvel series to debut on Disney+ in the studio’s expansion to streaming. The first three episodes are an homage to the television sitcoms of the ’50s, ’60s, and ’70s — I Love Lucy, The Dick Van Dyke Show, and The Brady Bunch are clearly represented in WandaVision’s trip down memory lane. The use of the classic sitcom formula, the costume and set designs, and the grainy, occasionally flickering images give it an authentic feel. Unfortunately, however, WandaVision doesn’t offer much else in the way of meaty material, wasting most of its creative energy on honoring decades of TV rather than in figuring out a way to stand apart on its own.

The series is set in the aftermath of Avengers: Endgame. Wanda had been brought back to life following Thanos’ snap; Vision, on the other hand, remained dead. Such is no longer the case here. WandaVision opens with an original theme song (which changes with every episode) and Wanda Maximoff (Elizabeth Olsen) and Vision (Paul Bettany) moving into a suburb of Westview, the kind of small town where everyone knows each other. The couple is married now and are trying to blend in. It’s a bit hard to do when Wanda (aka Scarlet Witch) can use magic to move things around without touching them and Vision is a living android. There’s also the issue of not being able to remember anything about when they got to Westview or why they’re there.

Vision doesn’t quite understand what it is that he does at his computational processing job and the pair can’t remember the significance of the date marked by a heart on the calendar. Despite this, the couple makes friends with their fellow townspeople, including nosy neighbor Agnes (Kathryn Hahn), whose husband is hilariously always mentioned in passing, but never actually seen, Geraldine (Teyonah Parris), and Herb (David Payton). While Wanda and Vision acclimate to their new surroundings, moments of normalcy are punctured by abrupt rewinds and pounding noises that seem to be coming from outside Westview, indicating that there’s something deeply wrong with this picture-perfect world.

WandaVision is very good at emulating sitcoms of decades past. Olsen’s performance evokes the charm and comedic timing of Lucille Ball, and she goes so far as to alter the way she speaks to differentiate the ’50s and ’60s version of Wanda from the iterations we’ve seen from the films. The series is unique in its presentation and it gets creative by exploring a different decade in each episode. That changes things up while keeping the story fresh; even the design of Vision and Wanda’s home is altered to reflect the times they’re in. What’s more, WandaVision is actually allowed to be fun and joyous, at least for the first three episodes. Bettany leans into the sitcom schtick especially well, employing physical comedy to make Vision feel as awkward as possible. Hahn is clearly enjoying playing Agnes, the fast-talking woman with a joke up her sleeve no matter the occasion. Somehow, she manages to walk a fine line between being chummy with Wanda and seeming somewhat suspicious. Meanwhile, Parris plays Geraldine with sincerity and a dash of genuine confusion before things take a turn.

One of Marvel’s biggest issues continues to be in its development of romantic relationships. Wanda and Vision were formally introduced as a couple in Avengers: Infinity War when they were on the run with Captain America. Even back then, their blossoming romance felt abrupt and there was barely any time in the film to evolve their relationship before Thanos kills Vision. The best thing about TV shows is that there is time to build up and explore such relationships, but WandaVision is barely interested in Wanda or Vision as individuals, much less as an odd couple. This heavily affects the series, which hinges upon their partnership. Why should we care that Wanda and Vision are happily married or that they’re expecting children? Will we feel devastation if Wanda is forced to lose Vision again? Doubtful. The writers don’t seem all that invested in them as a pairing save as a vehicle to deliver antics and hurdles they must overcome to appear normal to their neighbors.

All that said, the series doesn’t have much going for it outside of the main mystery and even then the clues are sparse and not very interesting on their own. WandaVision is also much too gimmicky, too concerned with putting on a show than in exploring its characters. Three episodes into the series and we learn absolutely nothing new about either Wanda or Vision. Sure, there is mention of Sokovia, the fictitious Eastern European country where Wanda grew up, but there’s no introspection or analysis into who Wanda is as a person. This show had the opportunity to finally give us more depth and insight, but it squanders any hope for more thorough storytelling in its first three episodes.

Beyond the magic and the shenanigans, WandaVision isn’t interested in further dissection of its characters or the eras it gleefully pays tribute to. That’s not to say the show is terrible because there are plenty of solid and enjoyable moments. But, it feels empty and aimless, like the writers wanted an avenue to play with the TV eras, but didn’t think hard enough about how to make WandaVision independent of the past. Is the show simply a stop on the way to a bigger story in the MCU? If so, that would be disappointing. Things could change over the remaining six episodes, but the show is off to a rough and underwhelming start.

The first two episodes of WandaVision are now streaming on Disney+.