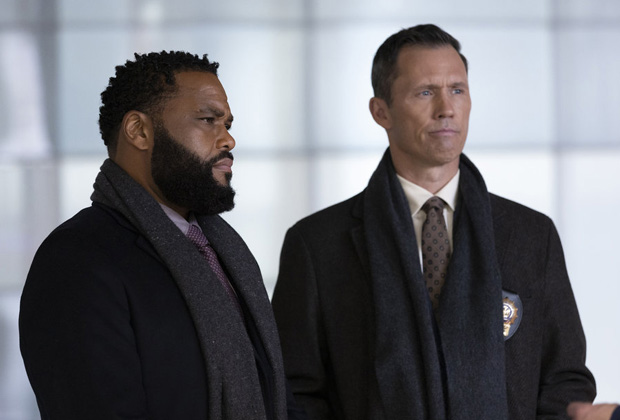 Is 'Law & Order' Laying the Groundwork for Writing Off Anthony Anderson's Character?

This week’s Law & Order took up the Britney Spears conservatorship, although that does not become apparent until about two-thirds of the way through what was frankly an episode with (spoilers) a depressing outcome. The murder victim in this week’s episode is a family judge who is bludgeoned to death with a fire extinguisher in a parking garage.

The family judge is dealing with gambling debts, but thanks to a hair left behind in blood on the extinguisher and CCTV coverage (the murders have been strangely easy to solve this season), Detectives Bernard and Cosgrove quickly tie the murder to a young tennis superstar, Lucy McDaniel. What they don’t have, however, is a motive, but the evidence is strong enough that E.A.D.A. Price decides to take it to trial anyway.

Initially, the lack of motive seems like it will be the novel wrinkle in this case, but the evidence is so damning that McDaniel quickly changes her defense strategy to not guilty by reason of insanity. We soon learn that, though McDaniel is over the age of 21, her father is her conservator, and if she is mentally ill enough to warrant a conservatorship, surely a legal insanity defense would be open and shut, right?

Not exactly, because as Price discovers, the conservatorship has less to do with McDaniels’ well-being and more to do with her father’s ability to maintain control over her and her tennis career, pay himself handsomely, and prevent her from marrying her boyfriend. In fact, the family judge with the gambling problem has been taking kickbacks to ensure that the conservatorship continues.

When A.D.A. Samantha Maroun — Law & Order’s bleeding heart — hears about this, she insists that they offer McDaniel a plea deal. She’d serve 15 years in exchange for pleading guilty to manslaughter. McDaniel’s father, however, says no dice, because he is more concerned with his daughter continuing her tennis career, even if it means risking life in prison. Price is like, “What are you gonna do? We offered the plea. We can’t make them take it, so we have no choice but to try the case as first-degree murder.”

Against Price’s wishes, Maroun pulls an end-around and asks Detective Bernard to visit McDaniel in prison and provide her with evidence that her father — and not the family judge — had prevented her from marrying her boyfriend. With this evidence, McDaniel — over the objections of both her father and her defense team — confesses to the murder and takes the plea, agreeing to serve 15 years. Meanwhile, Price tells Maroun that if she pulls a stunt like that again, she’ll be out on her ass.

It’s a hell of a case because while McDaniel did murder the judge, there were a number of extenuating circumstances, most notably the fact that she was being unwittingly controlled by her father.

As for Detective Bernard, I believe that most people know that Anthony Anderson agreed to return to the series for only one season, which means he’ll be written out of the series in May. If Bernard is looking for a reason to quit the force or at least transfer, there’s no shortage of them in the first four episodes in the form of micro-and macroaggressions from his old-school racist partner, played by Jeffrey Donovan. In typical L&O fashion, there’s been nothing subtle about it, either. In this week’s episode, for instance, when Bernard professed that he knew a little about tennis, Cosgrove says, “I didn’t take you as a tennis fan.”
“Why is that?” Bernard asks.
“Because you’re … uh, a cop,” Cosgrove responds, although it’s obvious what he was thinking.

Likewise, Bernard takes issue with Camryn Manheim’s Lt. Dixon because they were quick to do a full genetic analysis of the DNA of a hair found on the extinguisher. When Bernard asks why they conducted a DNA analysis for a middle-aged white man when they wouldn’t do the same for a “murdered Black boy,” Dixon can only shrug her shoulders and tell him, “That’s just the way it is.”

All of which is to say: While I’m sure that in this fictional world, Detective Bernard has been dealing with this bullsh*t his entire career, the way that L&O has been planting these racist digs against Bernard in nearly every single episode certainly suggests that there will be some payoff by the end of the season. Given the sledgehammer subtlety of the writing, I’m surprised that Bernard didn’t kick Cosgrove to the curb after his egregiously racist encounter with gang members in the premiere episode. The real injustice, of course, will be that after Bernard leaves, Cosgrove will invariably be able to stick around.