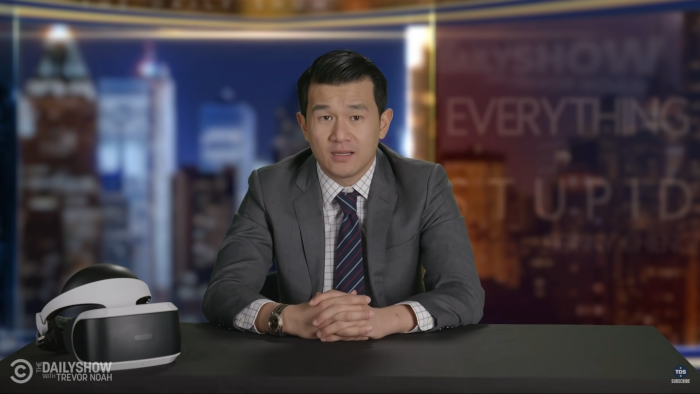 Ronnie Chieng Wants You To Know That The Metaverse Is Stupid

I’ve never been good at communicating with people online. I need face-to-face interaction. Otherwise, I find myself retyping any thought I have until I’m too late to join in a conversation. I’ll try to make a joke and have it not land because sarcasm via text can be hard to read (or sell). You’d think that, since I have to be online, I’d be open to a best of both worlds situation. A new way to talk to people online where I’d be actually talking, but virtually!

The company formally known as Facebook, as well as other tech giants, is trying to get people excited for the Metaverse, virtual worlds where people can do everything from building mansions to holding meetings. If it sounds dumb, it’s because it is! The mansion aspect knocked me out. As Ronnie Chieng points out in a recent segment from The Daily Show, Snoop Dogg is building a meta mansion and people are spending big bucks to “live” next to him! Because people are stupid!

Aside from people wasting money on digital landscapes, they’re also finding themselves being sexually harassed in the new space. This may come as a surprise, but if men can do something shitty whilst maintaining anonymity, they will! That was a joke. it shouldn’t be a surprise at all. Again, I’m just never sure how my tone comes across when I’m typing.

People in charge of the Metaverse say that it’s not a fad. I’d say that too if my money was at risk. I can’t say for sure that they’re wrong. My hope is that people would want to live in the real world and not spend most of their days with their face stuck in a screen and… ah shit, I don’t think this is a fad.


← The Best Highlight from the March Madness Tourney, So Far, Came from a Cheerleader | Is 'Law & Order' Laying the Groundwork for Writing Off Anthony Anderson's Character? →