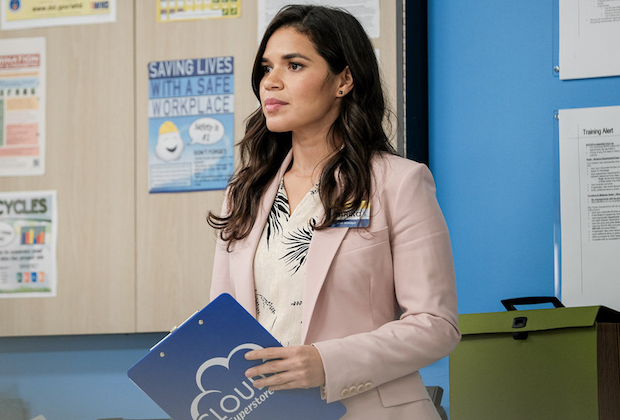 One of the issues viewers have had to contend with as the network television seasons wind down are story arcs that seem to abruptly end. Unfortunately, a number of televisions shows were still in the process of shooting their seasons when production shut down, so storylines are left dangling. On a show like New Amsterdam, viewers are left in the dark about the role of Dr. Reynolds (Jocko Sims), while a show like Supernatural — which was expected to end this season after 15 years — will have to wait months, if not longer, before they can shoot and air their finale.

Meanwhile, NBC’s sitcom Superstore has to confront an extra layer of confusion. America Ferrera, who plays the nominal lead in the beloved series, was expected to leave at the end of this year’s fifth season. However, production was halted midway through a two-part finale, so she was only able to get one foot out of the door. Her character, Amy, was offered a job at corporate in California and she decided to accept for reasons that (mostly) make sense in terms of her character, who has worked at Cloud 9 for 17 years and not only rightly feels that she deserves the job, but also understands that it’s her only real chance of advancement. We’ll ignore the fact that season 1 Amy Sosa would be very disappointed in season 5 Amy Sosa, but also, season 5 Jonah is probably more in line with season 1 Amy Sosa.

All of which makes Jonah’s decision in this episode to move to California with Amy an unexpected shock. However, it is almost certainly an unintentional season-ending cliffhanger. Ben Feldman is not leaving Superstore, and I’m not entirely sure how Superstore could even survive losing both Feldman and Ferrara simultaneously. The big question, however, is this: What will prompt Jonah to stay? He has no treason whatsoever to stay behind. His girlfriend is leaving for California along with a daughter that Jonah has made some connection with, while the only thing that Jonah has remaining at this Cloud 9 store is a connection to a union that his co-workers are only half invested in. Will Jonah give up a solid, loving relationship with Amy out of principle? Because he resents Amy for taking a job in corporate?

That doesn’t track. In fact, as the Jim Halpert of this Cloud 9, Jonah continues to work in a position for which he is overqualified. My assumption is that he has remained in this job and turned down more suitable opportunities for one reason only: Because he’s in love with Amy Sosa. Without her, why stay behind? Unless … Jonah is offered Amy’s manager position at Cloud 9. If Jonah senses that he can improve working conditions, wages, and benefits for store employees as the manager, it would not only give him an incentive to stay but give Amy a motivation for dumping him.

The good news is, we will eventually get to see the second part of that episode, although now it will act as the season premiere for the sixth season instead of this year’s finale. It also means that America Ferrara gets to delay her final goodbye, although with Amy moving up to corporate, she still exists in the universe and would be available for drop-bys, as warranted, co-showrunner Jonathan Green notes.

In the meantime, next season may see the addition of a new major character, but it will also give the show an opportunity to focus on and expand other actors in the ensemble, says the other showrunner, Gabe Miller.

“I think we’re looking to use some of the space and energy that went to Amy and to spread that a little more around the cast,” says Miller. “We’ll get a little deeper into those characters and see their dynamics with each other and have them stepping up and looking out for each other. Garrett is someone who can be the ‘sensible’ stand-in for viewers as he reacts to the more crazy elements [of his co-workers]. Glenn has had a parental role, looking out for the staff, at times.

“Those elements are there and maybe we’ll bring them out or some people will step up.”

Unfortunately, I worry that Superstore will repeat some of the mistakes of The Office after Steve Carell left. The series has an ensemble capable of continuing to carry the show, but I worry that the writers will get bogged down with the managerial position, which may offer a tempting number of storyline possibilities that will ultimately end up resembling a game of musical chairs, as happened on The Office as Michael Scott’s office was occupied by a rotating roster of actors, James Spader, Kathy Bates. Catherine Tate, Rainn Wilson, and Ed Helms, among others. Superstore would be wise to choose one manager — either an existing character (like Jonah or Garrett) or a new character — and stick with him or her for the next couple of seasons, as the series continues to explore — as it does so well — issues confronting retail and low-wage earners. Our current situation will undoubtedly offer plenty of material.

← Alanis Morisette Mashed Up With Alice in Chains is Pure Nineties Goodness | Parents of Reddit Ask, 'Anyone Else Sick of Pretending that This is Working?' →