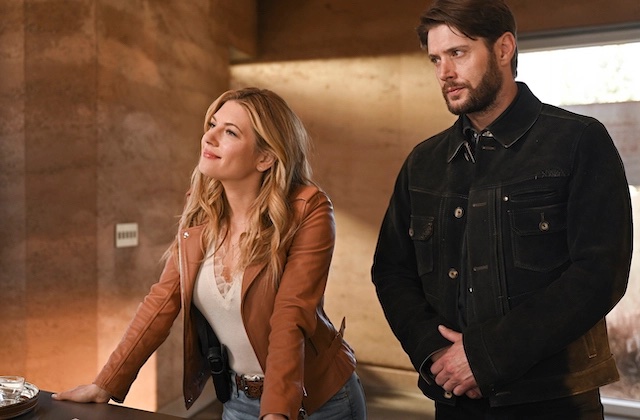 I watched half of the first season of David E. Kelley’s messy mystery drama Big Sky when it premiered before bailing for no particular reason other than the fact that there’s often too much TV to watch. However, several readers here encouraged me to return to the series — which stars Katheryn Winnick (Vikings) and Kylie Bunbury (Pitch) — and give it another shot. The announcement that Jensen Ackles, the ultimate man crush, would join the cast for season three (after making a brief appearance in the second-season finale) was the final kick in the pants I needed.

Does Jensen Ackles make Big Sky worth checking out? Yes, yes he does. Would he alone be worth watching? Yes, yes he would be. But thankfully, the series has plenty of other reasons to watch, too (namely Winnick and Bunbury).

Set in Montana, Big Sky teams a private detective, Cassie (Bunbury), with a cop, Jenny (Winnick), to solve mysteries with the aid of their kooky receptionist, Denise (Dedee Pfeiffer). The problem with the first season is that it was amusingly messy, but a little too dark. Ryan Phillippe’s character — in a real shock at the time — was killed off in the pilot, and the first season took up the kidnapping and murder of women by a truck driver, which raised a lot of red flags regarding cultural sensitivity in a state where indigenous women are kidnapped and murdered in disproportionately high numbers. That season also featured John Carroll Lynch in a quirky-ish horror role.

The second season’s mystery — involving a drug cartel — introduced a number of familiar faces, including budget Tom Hardy (Logan Marshall-Green), The League’s Janina Gavankar, and Jamie-Lynn Sigler from The Sopranos. It involved a drug cartel and a number of murders. I’ll say this for the first and the second season: Bunbury and Winnick are both great, but the central mystery in both seasons didn’t have enough story for 16 episodes. Plus, even with the likes of Logan Marshall-Green, Brian Geraghty, Patrick Gallagher, Constance Zimmer, and Dallas Roberts, the show seemed to be missing one key ingredient.

That ingredient, it turns out, is Jensen Ackles, who replaces Patrick Gallagher as the sheriff in season three. He makes an immediate impact. That voice! That Texas charm! That denim! He pulls a real Heather Locklear in Big Sky, lighting the mood and injecting a little more zip to the proceedings. He’s fun. More fortunate, still, is that he’s not brought in to be an antagonistic, by-the-books kind of sheriff: He basically joins the Cassie and Jenny team. He’s part of the gang! He’s easy with the wisecracks, and he has that sensitive dad appeal.

Better news still is that you don’t really need to watch the first two seasons to jump into the third. The mystery is mostly self-contained. All you need to know is that Cassie and Jenny solve crimes together in Montana and that Jamie-Lynn Sigler’s character was a part of a drug cartel in the second season (and has decided to “go legit” in the third).

There is still a season-long mystery arc, but each episode has its own cases-of-the-week, as well, so it doesn’t ask too much of the season-long mystery. It gives Big Sky more of a network television comfort level. The season-long mystery is a fun one, too. It involves a hiking-and-camping operation run by Sunny Barnes (Reba McEntire) and her family. Several duos sign up — including the daughter of Ackles’ Sheriff Beau Arlen — and her step-father (Henry Ian Cusick, who seems shady), and a couple running from someone or something. The season also kicks off with the death of a hiker, which can be attributed to a character played by Fringe’s Seth Gabel, who has a connection to the Barnes family that I don’t want to spoil. Also, Luke Mitchell plays the Barnes’ son, and damn. Tori says he’s gone full Hemsworth, but he reminds me more of Luke Grimes in Yellowstone minus all the grimness. It’s like having Jensen Ackles and Jensen Ackles-lite in the same show.

It’s fun. It’s good quality network television. The writing is decent, but the characters are where it really thrives. I suddenly find myself looking forward to it each week. Big Sky airs Wednesdays on ABC and is available the next day on Hulu.