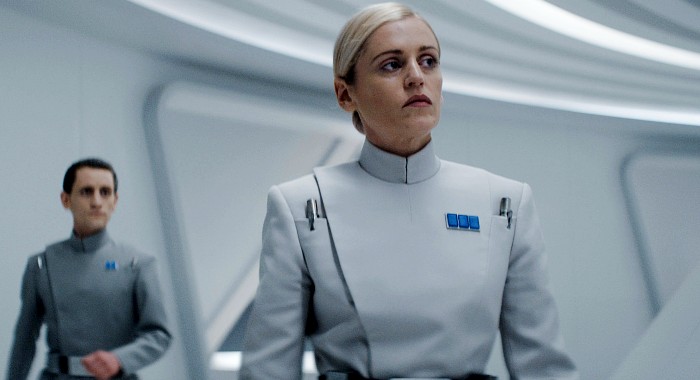 After Andor wrapped up its first three-episode mini-arc, I was concerned with how well the show would hold up as it switched to streaming just one episode a week. Episode 2, while full of great moments and complex storytelling, was a little light and would’ve felt kind of naked had it been released on its own. Fortunately, Episode 4 “Aldhani” easily cleared that hurdle by being the longest episode yet. It stands firmly on its own even while serving as table setting for Cassian’s entry into the barely-formed (and extremely fragile) Rebel Alliance that’s yet to make a major move against the Galactic Empire.

Speaking of the Empire, “Aldhani” continues Andor’s so-far impeccable story-telling run by building out a richly-detailed portrayal of the Star Wars universe that defies expectations at every turn. During the first meeting between Cassian and Luthen (Stellan Skarsgård), the Empire is described as fat, decadent, and getting sloppy in its arrogance. Luthen asks Cassian how he was able to obtain an Imperial Starpath unit, and the young thief said it was a simple matter of waltzing in and taking it. He boasted that the Empire would never think they could be robbed by “someone like me.” Not so much.

In Episode 4, the Empire makes its presence known through the inner-workings of the Imperial Security Bureau (ISB). Turns out, the Empire is very much on its shit. Instead of bumbling Stormtroopers who can’t seem to hit the broad side of a space barn, the vast intelligence bureau is not messing around. Tasked with being “healthcare providers” by systematically eliminating pockets of unrest, the ISB is investigating the incident on Ferrix where Syril’s corporate assault team got stomped by the locals in pursuit of Cassian. (The screw-up was so bad, that the Empire seized the whole corporation, forcing Syril to literally move back in with his mom.) More importantly, the stolen Imperial Starpath unit that Luthen told Cassian to leave behind is proving to be very consequential.

Not only is the ISB aware that the part was stolen, but its recovery on Ferrix is now on the radar of Lieutenant Dedra Meero (Denise Gough). Meero has been diligently keeping track of similar thefts, and she’s starting to see a concerning pattern. While her superiors aren’t so convinced, yet, we’re seeing a cunning and intelligent side of the Empire that is not being easily robbed without consequence. The noose around Cassian and Luthen has tightened — ironically, by their arrogance — and they don’t even know it. 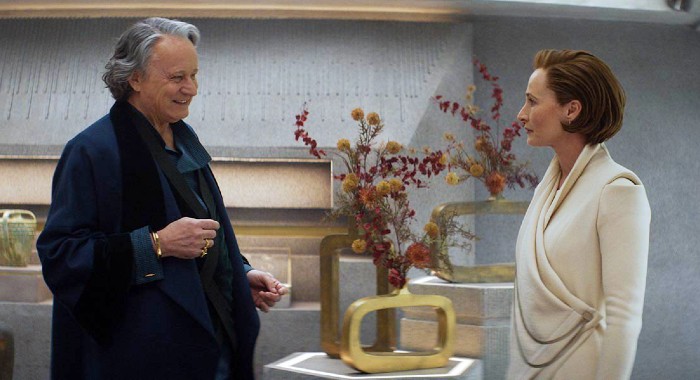 As the ISB pokes into the events on Ferrix, Luthen persuades a reluctant Cassian to join a mission to steal a massive Imperial payroll on the titular Aldhani. “Put a real stick in the eye of the Empire.” However, Cassian has zero interest in rebellion. He has no love for the Empire especially after briefly serving on Mimban (Hello, Solo reference!), but he’s also not about to get in bed with zealots like Saw Gerrara (Hello, Rogue One ref— oh right, the whole show is that). Fortunately, Luthen knows the quickest solution to the problem: Cash money. He offers Cassian a whopping 200,000 credits for the job, which works significantly better than flattery about how Cassian is what Luthen was really searching for on Ferrix.

After getting Cassian on board, Luthen meets with Vel Sartha (Faye Marsay) outside his ship, and he’s now tasked with getting her to buy into Cassian joining the mission. A mission that goes down in just three days. She’s noticeably not thrilled. But just like Luthen manipulated Cassian, who he readily describes to her as an “expendable” redundancy, he gets Vel on board by testing her strength as a leader. A strength that is not quite there yet, and becomes a major source of tension as the rest of her rebel group is also not loving Cassian’s presence. The whole mission is on a knife’s edge, and not just for the team executing it.

With the pieces in play on Aldhani, Luthen jets back to Coruscant, pulling Andor into the very center of the Star Wars universe. For you non-nerds, Corsucant was the capital planet for the Republic and the home of the Jedi Temple before Emperor Palpatine staged his successful coup in Revenge of the Sith. Now, it’s the seat of the Galactic Empire and the Imperial Senate where politicians either carefully maneuver the authoritarian regime to lessen its power or work to increase it.

Enter Mon Mothma (Genevieve O’Reilly), Andor’s first dalliance with a legacy Star Wars character albeit an obscure one. Shown very briefly in Return of the Jedi, Mon Mothma served as the de facto leader of the Rebel Alliance and a mentor to Princess Leia Organa. (Or at least used to be. The canon is a mess right now.) In Andor, she’s still just an Imperial senator, but one who is not content with Emperor Palpatine’s rule unlike her dickbag husband who gives off huge “Why can’t I be friends with fascists?” vibes a.k.a. the worst.

You see, on Coruscant, Luthen takes on a completely different identity. I’m talking he wears a wig and puts on an accent while fronting as an antiques dealer for the super rich. He looks and sounds nothing like the gruff badass who just blasted his way out of Ferrix. This deception allows him to meet with Mothma under the guise of a wealthy senator shopping for an overpriced item. However, their meeting shows an Alliance that’s in constant danger of crumbling at any second. The Imperials are monitoring everyone more closely than ever. Mothma’s own driver is probably a spy. Making matters worse is she and Luthen are prone to butting heads. This time, she wants to bring someone new into their “circle,” and now, he’s the one pushing back on last-minute additions. As the tension increases, Mothma reminds Luthen that she will be the “first to fall” should their plotting be discovered. This show has already alluded to hanging dissidents, so the stakes are clear.

Once again, Andor delivered another captivating as hell episode. Before it even aired, there was talk of the show being Game of Thrones but for Star Wars, and I gotta admit, that comparison plays. Andor is butt-loaded with political intrigue, backstabbing, and shit, even Game of Thrones actors. It is night and day from the Saturday morning cartoon vibe of The Mandalorian, which for the record, there’s nothing wrong with. Both are equally valid and necessary approaches to keep Star Wars vibrant.

That said, as much as I hate the pretentious, film bro nature of this descriptor, Andor is proving to be Star Wars for adults. It’s prestige sci-fi by way of John le Carré, and I can’t get enough of it.


← Is 'Big Sky' Worth Watching for Jensen Ackles and Jensen Ackles Alone? | The Brad Pitt and Emily Ratajkowski Rumors Are Heating Up →