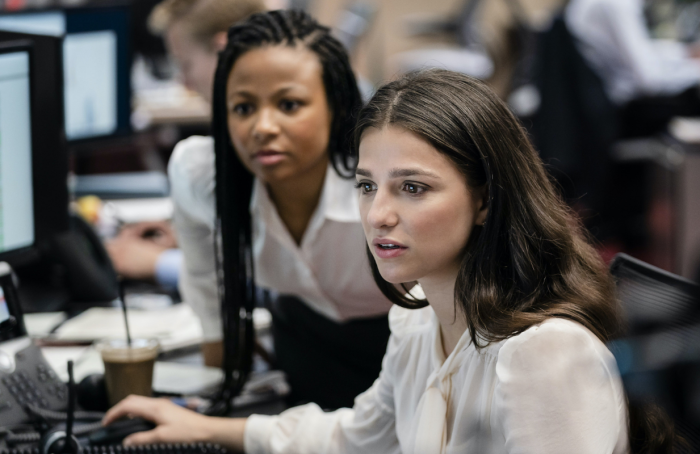 HBO Max is so keen on its new series Industry that after airing the first three episodes weekly, the streamer will be releasing the rest of this season’s five episodes on Friday (they will continue to air weekly on cable boxes). It’s easy to see why HBO has so much faith in Industry. The network’s DNA is all up in it: It’s basically Euphoria crossed with a Brett Easton Ellis novel, or at least the contemporary equivalent of Easton Ellis, Lena Dunham, who directs the pilot.

Industry has that same unctuous quality that Girls possessed, and it’s trying really hard to be edgy: Everyone in Industry fucks, and it always seems to involve a lot of spit and Instagramming. “Ah, an uncut dick,” Harper Stern (Myha’la Herrold) says to a bloke whose face she just sat on after picking him up on Tinder. “I feel like I’m in a Richard Curtis film.” It’s the kind of show where the other female lead, Yasmin (Marisa Abela), snaps a pic of her boyfriend going down on her on top of the kitchen island and texts it to a co-worker on whom she has a crush. Or where a gay co-worker drunkenly barges into his closeted co-worker’s house in the middle of the night and fucks him on the downstairs couch while the wife is upstairs asleep. See? Edgy.

Set in the London financial world in the aftermath of the 2008 crash, Industry is a workplace drama that frequently references “clients” and often drops financial terms, but this particular workplace — Pierpoint Investment Firm — is mostly an excuse to inject aggro posturing and intense competition into the sex lives of its employees. The principal cast is largely made up of very attractive 20-somethings, and their older bosses, who all seem to be playing a variation of Kevin Spacey in Swimming with Sharks, except for Ken Leung’s Eric Tao, who might just have a soft spot underneath all the brooding swagger.

It’s not a show without merit, and as with Bret Easton Ellis and Lena Dunham, there’s a decent relationship drama bubbling beneath all the posturing. As obnoxious as Girls could be, however, Dunham knew how to define her characters. In Industry, alas, Harper is mostly the ambitious banker who has a chip on her shoulder owed to her lower socioeconomic background (and the fact that she lied about graduating college); Yasmin comes from wealthy parents and has a chip on her shoulder about coming from a privileged background, and David Jonsson’s Gus Sackey has a chip on his shoulder because he’s a Classics major and smarter than everyone else in the room. There’s a lot of insecurity, a lot of bluster, and a whole lot of fucking. What remains to be seen is where Industry is heading and what it’s trying to say, besides greed (and sex) is good. It very well could just be a Skins clone set in the banking world, and that’s fine. It’ll pass the time and provide modest entertainment value, but it won’t leave an impression like Euphoria or Girls or even Billions unless it aspires to be more than a soft-core soap.