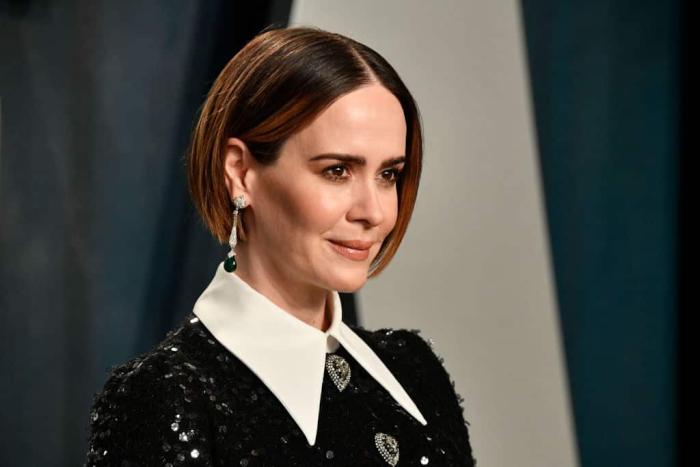 There is a moment in Run, the Hulu thriller starring Sarah Paulson as a DeeDee Blanchard-esque mother whose possessiveness of her disabled daughter verges into criminal, where our leading actress has to flip the switch from monstress to terrified parent. It’s a common scene in these sorts of stories, the moment where the mask slips, but what makes Paulson’s take so interesting is the way she clings to the real emotional heart at the center of something so heinous. Her character, Diane, is a danger to her child, a gaslighting abuser who has inflicted medical trauma on her since childbirth. Yet in this easily missed flash, you see a real parent under the villainy.


There aren’t many actresses working in American film and television today who can do what Sarah Paulson does. Indeed, there are few who are offered so many opportunities to do it. The 45-year-old has been a regular on film and TV since the mid-90s, jumping from network to cable to streaming, and finding time to turn up in indie darlings, blockbusters, and the occasional awards season magnet. The chances are that, over the past 25 years, you’ve seen Paulson in tons of things and not known it was her. Like many working actresses, she did a bit of everything: quickly-canceled dramas and sitcoms; guest turns in familiar properties; supporting turns in movies of all genres and quality; and even a few award-nominated performances in things like Game Change and Studio 60 on the Sunset Strip. She wasn’t wildly famous, there wasn’t a ‘Sarah Paulson-type role’, and she didn’t seem like the kind of actor who would explode into the stratosphere of popularity. Most character actors never get there. The whole point of being that kind of creative is to blend in, not bathe in the spotlight. For Paulson, however, things changed when she met up with a guy named Ryan Murphy.

Paulson had been on the radar of the now-biggest man in TV for years, long before she made it to the small screen in one of his projects. After a brief appearance in Nip/Tuck a few years prior, in 2008, she was cast in the pilot for Pretty/Handsome, an FX project Murphy and collaborator Brad Falchuk had created, wherein Joseph Fiennes would play a transgender woman. The series was never picked up — and let’s be honest, we’re super-glad it wasn’t because hoo-boy, how little do we trust Ryan freaking Murphy with that story? — and Paulson moved on. In 2011, however, Murphy launched his never-ending American Horror Story saga, and in Paulson, he found his perfect star.

To date, Paulson has starred in eight seasons of American Horror Story, plus other Murphy series, The People v. O. J. Simpson: American Crime Story Ratched (she also turned up for one episode of Feud as Geraldine Page.) She’s currently filming, and acting as an executive producer, on the newest season of American Crime Story, focused on the Bill Clinton impeachment. Suffice to say, Paulson has benefitted greatly from her work with Murphy. Regardless of what you think of the Murphy-verse, it’s tough to deny the sheer off-the-leash freedom he allows his actors. Few do it as well as Paulson.

Murphy’s track record with female characters is, to put it politely, mixed. He revels in unconscious camp and the kind of blousy gorgons who dominated Hollywood during the studio era. Think Bette Davis in Of Human Bondage, a dynamite performance of venom and callousness that felt so shockingly raw at the time. Indeed, both Murphy and Steve McQueen, who directed her in 12 Years a Slave, compared Paulson to Davis. While much of modern pop culture — Murphy included — has reduced Davis’s career to hagsploitation and drag impersonations, her dramatic work remains fierce and urgent all these decades later. At a time when Hollywood cinema demanded — and was dictated to by the Hays Code — stark moral clarity, Davis felt like a spit in the face to such a binary concept. Paulson inhabits similar ground, although it often seems as though she’s pushing herself past the more reductive confines of the work itself. Such is the Ryan Murphy conundrum.

Look at the myriad roles Paulson has played in the American Horror Story cycle: a grungy, heroin-addicted ghost; a fractured family woman with overwhelming phobias; a lesbian journalist imprisoned in an abusive asylum; conjoined twins who share a body but not personalities; a meek witch who comes into her powers while dealing with a cruel mother. Murphy loves a woman on the edge and Paulson always rises to the frenetic challenge, even when she’s better than the material. Murphy is a showrunner who, as I’ve said before, gets bored of his own ideas really quickly, leaving most seasons of American Horror Story to languish in disappointment by about episode five. Often, it feels like Paulson is the only one holding things together, matching Murphy’s erraticism in terms of lurid camp without making total caricatures of figures who are seldom rooted in anything remotely resembling realism. She excels at playing women peering over the precipice into total chaos, much like her frequent co-star Jessica Lange. In Paulson’s hands, it doesn’t seem all that unfeasible that a real-life person would act out in such a manner, a quality that not all of her colleagues have mastered.

The real jewel in the crown for Paulson is her performance as Marcia Clark in the OJ Simpson season of American Crime Story. Rather than imbue the tragic with effective camp, she dragged Clark away from the parodies, public scorn, and continuing dismissal of her character, bringing her into the near-unthinkable realm of humanity. Everything about Clark was mocked during the trial, from her crisp curly hair to her private life. In Paulson’s eyes, Clark’s biggest crime was being almost hilariously unprepared for the barrage of media attention thrust upon her, and in her performance, we see the weight of all that pressure slowly smother the lawyer until she seems physically squashed by it. Paulson’s Clark is a woman who, naively, truly seems to believe that justice will prevail above all else and watching her become consumed by the opposing forces in all their monied might is both tragic and riveting. American Crime Story’s greatest achievement may have been in its strident rewriting of the historical narrative surrounding Marcia Clark, and Paulson can take a huge slice of the credit for making that happen.

And yet she never shies away from that camp. She can nurse a large glass of red wine and spit furious one-liners like the best of them. While the execution may often be lacking, Murphy’s shows giddily embrace the inherently ludicrous nature of life and all the ways it can make things equal parts better and worse. That requires a certain kind of acting skill in execution, a hearty mixture of tragedy and clownishness. Paulson seldom allows the latter to overpower the former.

Paulson is currently at work on one of her trickiest roles to date: Linda Tripp, the Pentagon employee who secretly recorded Monica Lewinsky’s confessions of an affair with President Bill Clinton. Even during the height of the impeachment hysteria, wherein Lewinsky became the most derided woman on the planet, Tripp was viewed as a sneak, a traitor to her much younger friend who placed so much trust on her shoulders. Tripp later became a figure of mockery herself, most infamously during a series of sketches on Saturday Night Live where she was played by John Goodman in drag. It’s unlikely that Tripp will receive the full Marcia Clark treatment in Impeachment, a show executive-produced by Lewinsky, but it will be fascinating to see how Paulson can get the reins over this tricky woman and get viewers to understand something that is still viewed by many as indefensible. If anyone can turn her into a sympathetic anti-hero, it’s Sarah Paulson.

← The Best Damn Music Video of All Time: 'Carry On Wayward Son' by Kansas | 'Industry' TV Review: In the HBO Drama, Greed Slaps →