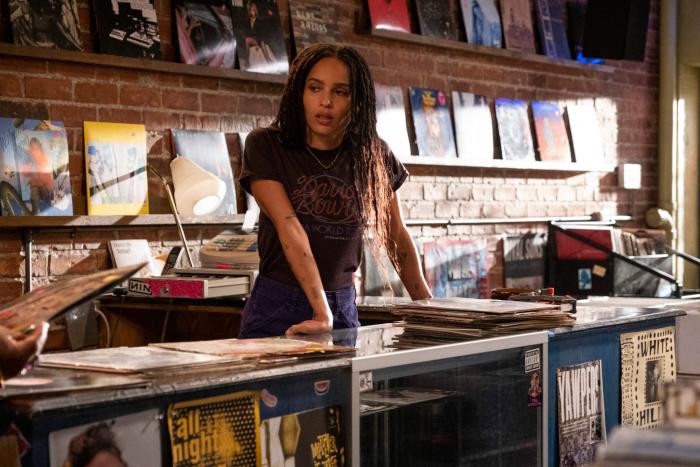 Nick Hornby’s High Fidelity is a huge personal influence. I read it at a particularly formative period in my life, and in some ways, I saw myself in the novel’s lead character — Rob Fleming — and later, again, as depicted by John Cusack in 2000 film. I saw Rob as an idealized version of myself, a guy who reduced music, movies, food, and even people to Top 5 lists (the seriously random lists here — which we were doing long before Buzzfeed — were inspired, in part, by Hornby). High Fidelity instilled in me the idea people could be sorted and judged based on their taste in books, movies, and music. More than that, it reinforced the idea that I could define myself by my own pop-culture interests.

I was an insufferable, annoying prat.

It took me two decades to come to the realization, and it might have never occurred to me had Hulu not rebooted High Fidelity with Zoë Kravitz in the lead. Don’t get me wrong. She is phenomenal in the role, and Hulu’s series is great, almost in spite of Nick Hornby’s source material. Kravitz, and Jake Lacy, and Da’Vine Joy Randolph, and David Holmes transcend the book’s Hornbyisms, and the series’ writers/creators Sarah Kucserka and Veronica West allow these characters to be defined by more than what they like. They are actual characters, not list generators who make value judgments based on what era of Stevie Wonder you prefer.

The irony is that I never would have recognized this had Kucserka and West not gender-swapped the lead character. If it’d been another moderately good-looking white guy, I’d have probably continued to believe that Rob was cool and that his pop-culture passions elevated him as a person, to the detriment of others who had dissimilar interests.

Indeed, the Hornby-esque traits were the best part of John Cusack’s character — they are what made him attractive as a person. With Kravitz’s Rob, however, it’s a completely different story. The Rob on the Hulu series is played by someone who is infinitely more gorgeous and infinitely cooler than most of us could ever hope to be. It comes naturally to Kravitz. She exudes it. The Hornby-esque traits, meanwhile, are her warts. They are her character flaws. But they also reveal her vulnerabilities and insecurities.

In the 2000 film, Cusack’s Rob displayed a kind of unearned arrogance based on his love of, for instance, the Violent Femmes, and he didn’t allow for a difference of opinion (Though unspoken, Ethan Hawke displayed the same arrogance in Reality Bites). It’s typical white-guy behavior. You either like the Violent Femmes and arrange your vinyl collection autobiographically, or you are a sh*tty low-class person who listens to mid-’80s Stevie Wonder mall music. But as a white guy — one played by Lloyd Dobler, no less — Rob’s opinion could stand unchallenged, both in the context of the movie and from the perspective of its audience.

Kravitz’ Rob, on the other hand, is the kind of person who would try and explain why the Violent Femmes are cool and why you should like them, because as a black woman, she can’t just stick her dick in the mashed potatoes, as the Beastie Boys might say. She doesn’t have the privilege of resting on declarative statements. Kravitz’ Rob wants — has — to earn our admiration. Because she has to earn it, it makes her a better fictional character.

Still, in spite of the fact that her character is much less obnoxious than the Cusack version, every time she returns to her top 5 break-ups or allows the music to speak for her personality, it feels cringe-y. It’s not just because it reflects a lack of maturity in the character, but also because it would prompt me to replay dozens of similar conversations I had in my 20s and wonder how I ever managed to land a date, much less a second or a third one. Not only did white boys weaponize pop-culture references back in the day (“the day” = 1995 to the sixth season of Community), but we used it as a shorthand to be dismissive of others. That we were geeks or nerds or music snobs instead of douchebags did not necessarily make it any less entitled or obnoxious. It just meant that we were less likely to be called out for it.

← With Movie Theaters Closed, What Do 2020's Box Office Numbers Look Like Right Now? | Meghan Markle and Prince Harry's Son Archie Talks Already, Which Means I Have No Idea How Kids Develop →