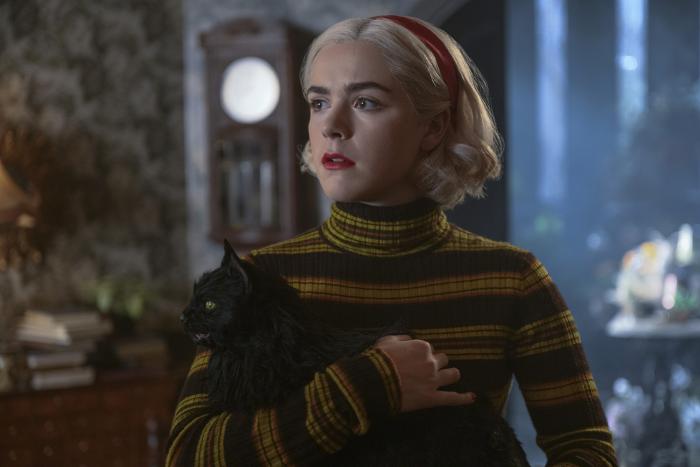 Will This Season of 'Riverdale' Ever End?

I have not kept up with the Riverdale recaps in a few weeks, in part because it’s impossibly bad — which is not new — and also because it never seems to end. We’re coming up on the Fourth of July now, and even after this week’s episode, there are still four remaining episodes, which should take us until the last day of July. That is unconscionable for a network series that began airing last November with a five-episode special event set in the alternative universe of “Rivervale.” Remember that? That was this season. No wonder the cast of the series can’t wait for the show to end.

Since the pocket universe collapsed in on itself and gave everyone superhero powers — superhero powers that have weirdly been mostly ignored in recent episodes — the season has had to contend with big bad Percival Pickens, who is determined to make Riverdale ground zero of the apocalypse. Each week, Percival hatches a plan in furtherance of that goal, and each week, the Riverdale characters try and stop it. They fail, whether it’s an actual superman fighting Percvil in a boxing ring or a time-traveling character who has confronted Perkins in 5 different timelines.

Also, last week, there was an episode based around American Psycho: The Musical because this show hates me.

This week’s episode is centered on the wedding of Fangs and Toni, and Perkins’ decision to unleash the Biblical plagues upon the city of Riverdale. I’ll spare you the complete rundown and offer the highlights:

— Amid the unleashing of the Biblical plagues, Veronica — who is asked to plan the wedding for Toni — spends most of the episode complaining about being single. She even sings a Broadway tune — “The Ladies Who Lunch” — about the miseries of singledom as part of her rehearsal dinner speech to Toni. Oh, and she also starts pining for Archie again.

— Kevin decides to turn on Percival and give up his custody dispute with Toni. He also warns the other Riverdalians about Percival’s plans. In gratitude, Kevin is invited to Toni and Fangs’ wedding, where he is elevated to, like, the wedding singer.

— Toni’s ex-girlfriend, Cheryl, is asked to officiate the wedding, upsetting a whole lot of Cheryl/Toni shippers. She decides to give Toni the greatest wedding present ever: She’s gonna kill Percival. She cast a spell on him, but he reverses it somehow and ends up torching Granny Blossom.

— Nevertheless, the gang is able to render Percival powerless, for a moment anyway. They trick him and put him in a stockade, which robs him of his powers long enough for Toni and Fangs to get married.

— The stockade doesn’t last long, however, because the plague of locusts eats the wooden stockade, freeing Percival. Percival, in turn, casts a spell on the badly burned Nana Rose, which not only kills her but ultimately kills all the first-born children in Riverdale. Hey! Just like in the Passover episode of Rugrats! Among the dead include Archie himself, as well as the bride and groom, Toni and Fangs.

— Don’t worry. Cheryl’s girlfriend, Heather, has got a guy, and by that, I mean: She knows a necromancer who can reverse the spell. Her name is Sabrina. And yes, it’s that Sabrina (Kiernan Shipka will appear in next week’s episode).

SABRINA SPELLMAN IS COMING BACK EVERYONE CHEERED😁🙌🏽 #Riverdale pic.twitter.com/PUTpoGlymW

— First-born Jughead also dies, but not before encountering the Jughead from the Rivervale universe, who I guess is gonna stick around until next week because the multiverse is exactly what we need during the crossover event.

There remain four more episodes of the longest season in television history.