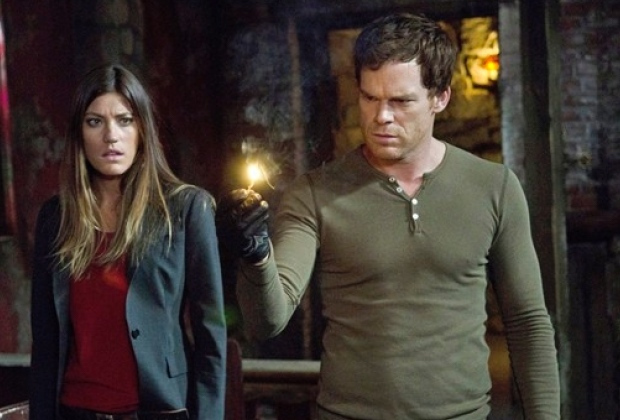 Here's the First Look of Dexter's Son, Harrison, in the 'Dexter' Revival

After keeping details buried in mystery for months, some tidbits from the Dexter revival — which will premiere on November 11th — are beginning to emerge. First off, as expected, Jennifer Carpenter — whose character Debra Morgan died in the original series finale — will be returning, and she will be playing Dexter’s new Dark Passenger.

“She represents a corner of Dexter’s mind that we all have in our own heads that says, ‘Well, wait a minute, if you do this, then there are consequences,’ the show’s original showrunner, Clyde Phillips (who has returned for the revival) said during Showtime’s TCA presentation this week.

What’s perhaps more surprising is that we’re hearing for the first time that Dexter’s son, Harrison, will also be featured in the revival. He’s ten years older and now played by Jack Alcott.

Harrison, is that you? #Dexter pic.twitter.com/gYWUEK2WPP

He will also figure prominently into the storyline. He tracks down Dexter in upstate New York and tries to insert himself into Dexter’s life. “We can’t do a show about Dexter without bringing back his son, who he left when he was 5 years old,” Phillips added. “His son thinks he’s dead but then finds him alive and he’s full of resentment. Dexter will have a lot of work to do to win his son back and prove that he’s a good father and I think we get there.”

I know that they are saying this is a limited run and a proper ending for the series, but they’re also calling it New Blood, introducing Dexter’s grown kid and suggesting that the theme of this season is fathers and sons. If it’s a successful revival, we all know Showtime will resurrect their highest-rated series of all time again, even if it means Dexter ends up being Harrison’s Dark Passenger in the next iteration.