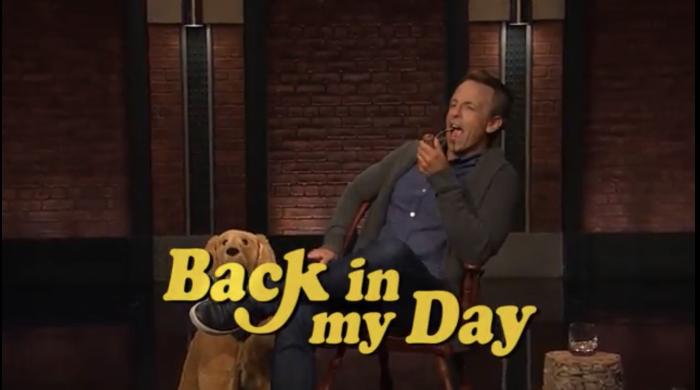 As a man who is currently being sued for allegedly sexually assaulting a minor once said, “the times, they are a-changing.” New York has its first female Governor. People are taking horse dewormers to fight COVID. Batman’s longtime ally Robin has come out as bisexual. It’s an exciting time to be alive. But things used to be different. Just ask late-night host Seth Meyers!

Meyers dusted off his “Back In My Day” bit for the newest episode of his eponymous show. Always a delight, the segment involves making comparisons between current and past events, even if the past events are not that far gone. Clad in a cozy sweater and sporting a pipe, Meyers sits in a rocking chair to reminisce about a simpler time, a time when Mountain Dew only contained alcohol if one of your stupid college friends thought they were making a cool new mixed drink.

Meyers references another recent event: Robin (specifically the Tim Drake version) coming out as bisexual in the comics. It is a wonderful new advancement for the character that made headlines. Of course, it also sparked outrage from the same kind of people you would expect. However, my favorite thing to come from if so far is a joke Meyers makes in this segment. Is he referencing the wrong Robin? Yes, nerd (I’m the nerd in this situation). Is it a hilarious joke regardless? Yes, nerd (again, it’s me, I’m the nerd).

Grab a cool glass of Mountain Dew. Put on your favorite sweater. Sit in your comfiest rocking chair. Lament the passage of time. It is Wednesday after all.