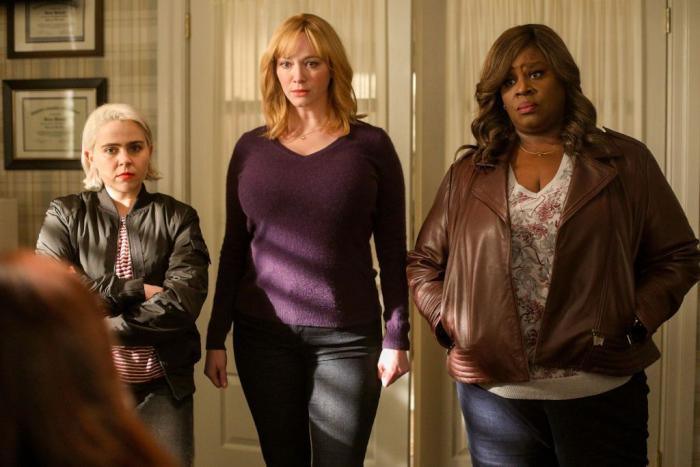 'Good Girls' Is Still On, Now In Its Fourth Season

Maybe a more accurate way to describe it is as Breaking Bad but for the squeamish, or those who do not like intense violence or to be stressed out by a television show. I suppose it’s hard to fit all of that into a headline. It’s not entirely accurate, either, because while Good Girls does have a lighter tone, and sometimes it’s even funny, there are some stressful sequences, too (in fact, there were two in this week’s episode). The villain in Good Girls, likewise, has more plot armor than those in Breaking Bad, because there’d be an open revolt if they killed off Manny Montana’s Rio, who really is as legitimately villainous as Gus Fring. He’s just a lot sexier (no offense, Giancarlo Esposito).

Somehow the series has also quietly worked its way into its fourth season already. Time flies, I suppose, when you’re spinning your wheels, which is what Good Girls has mostly done over the last three and a half seasons. I’m not knocking it, mind you. But as good as it is, it’s still a network television series, so there’s no Mr. Chips to Scarface arc here. It’s more about three suburban moms trying to cling to those suburban lives as they’re dragged into a life of crime (not that they don’t also enjoy it from time to time). Instead of a slow descent, Good Girls descends then resets then repeats the process again.

Week-to-week, it’s also reliably entertaining, although it’s not a show that could withstand a lot of critical scrutiny. The series has a tendency to abort story arcs and bounce around without much in the way of rhyme or reason. Christina Hendricks, Retta, and Mae Whitman play Beth, Ruby, and Annie, respectively, and the series began with a simple grocery store robbery, but it’s led them into counterfeiting, money laundering, and the occasional murder (but only of people who deserve it!). Manny Montana’s Rio is the big bad, and sometimes they’re working with him, and sometimes they’re working against him, and sometimes they’re trying to kill him, and sometimes they’re trying to save him. At the moment, Beth is trying to inform on him in order to spring her husband, Dean (Matthew Lillard) from prison. Meanwhile, Ruby’s husband, Stan (Reno Wilson), used to be a cop and a boy scout, but Ruby pulled him into the life, and now he’s a henchman for the owner of a strip joint. And Annie is a single mom trying to strengthen the bond with her son while having the occasional affair with her ex-husband or trying to sleep with her therapist.

Good Girl is messy, but that’s also part of its charm. It’s entertaining, it doesn’t ask too much of us, the cast is delightful, and though it airs weekly on NBC, I am fairly certain most of its audience binge watches it on Netflix. It is probably a better way to watch it because it allows the viewer less time to drive through those plot holes or question the faulty logic of basically every choice anyone has ever made on the show. I also understand that, like Breaking Bad, the massive Netflix audience has helped to grow its network audience, which doubled last season over the season before. It spent the first couple of seasons on the bubble, but now that it’s a legit hit, it may somehow outlast Breaking Bad and its six seasons.