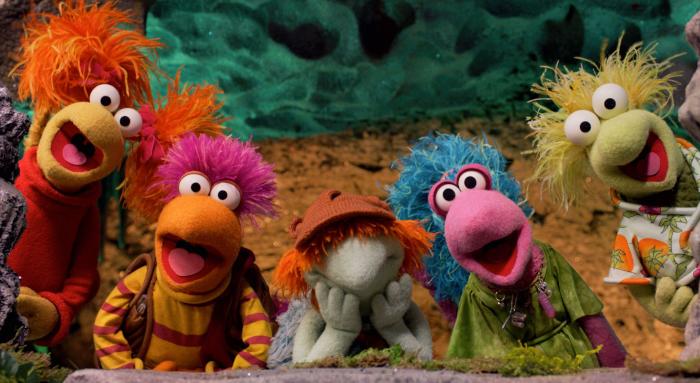 'Fraggle Rock: Back to the Rock' Is a Perfect Reboot

Do you remember that terrible ABC series The Muppets? The one where they put our favorite characters in real-life situations? Kermit and Miss Piggy were separated, Gonzo and Camilla split up, the Muppets were worried about bills and hemorrhoids. It forgot everything that made Jim Henson’s creations so treasured. Given that, one is forgiven for worrying AppleTV+ would similarly miss the mark with its reinvention of Fraggle Rock. But worry not! Back to the Rock not only remembers its roots, but it also uses them as the foundation for a much-deserved update.

Delightful Lilli Cooper takes over for Gerard Parkes (RIP) as the new Doc, moving into the Outer Space apartment along with Muppet dog Sprocket. She’s a Ph.D. student researching methods for removing microplastics from the oceans. On the other side of their wall lies the lands of Fraggle Rock, with Gobo, Red, Wembley, Mokey, and Boober living their best lives. Everyone returns, from the Oldest Fraggle to the Gorgs and Marjorie the Trash Heap. Muppet maestro Dave Goelz returns as Boober, while most other characters are voiced by new actors. They’re all great; my biggest complaint is that Marjorie’s voice is sometimes so shrill it causes me physical pain, but it’s infrequent. With the return of Sprocket, Fraggle Rock: Back to the Rock imagines a world where dogs live for decades, if not forever. I like that idea.

Every facet of the show is polished until it gleams. The puppets are beautifully made and lifelike. It’s always a pleasure watching professionals practice their craft, and the puppeteers here are at the top of their game. The camera work is far more dynamic than the original, shot in such a way that everything from the Fraggles to the Gorgs to the landscape feels real in a way CGI animation never can. Each episode is an individual story, but they’re all loosely connected and show the unintended consequences that sometimes arise from both accidental and deliberate action. The lessons contained are both topical and critical, appropriate not only for children but young adults and our parents as well. Hell, the entire third episode is about Mokey’s reliance on feelings over facts, ignoring the experienced voices around her until she’s trapped in a literal Echo Chamber. It should be required viewing for anyone relying on FoxNews or NewsMax for their information, and honestly is a good reminder for us all. The second episode, all about consent, distills the issue down for elementary students but is summarised so well that anyone old enough to have sex should watch. “Yes means yes, no means no. If it’s not a big yes then it’s a no go.” There are environmental issues caused by pollution. Ineffective leadership. False advertising. Lies, intentional and otherwise. Back to the Rock covers many of the issues facing us today and does so with humor and empathy. There’s even a cameo from the Foo Fighters!

My son adores the show. “The grumpy one is my favorite,” he says, and it’s easy to see why he finds Boober so relatable. He’s only 6 but already suffers from major anxiety. He gets so wrapped up in his own thoughts that it sabotages his schoolwork and fun with friends. With an entire episode devoted to Boober’s anxiety and getting his friends to understand that activities they enjoy provoke fear in him, it’s like they were speaking directly to my kid. Even my 10 year old enjoyed the show, though she’s reached the “too cool for puppets” stage when it comes to anything other than A Muppet Christmas Carol.

There are no doubt complaints about the show’s “wokeness,” but there isn’t anything here you wouldn’t find on classic Sesame Street, Mr. Rogers, or original flavor Fraggle Rock. The language is new. The lessons are not. The harshest critique I can provide is that as an AppleTV+ exclusive, not nearly enough kids will see Fraggle Rock: Back to the Rock. Making it available to PBS after a year or so would do a lot to balance Apple’s frequent bad press.

Fraggle Rock: Back to the Rock is pitch-perfect. Fun characters, sharp and witty writing and great camera work create a reboot equal to or surpassing the original in every category. This is a show with important lessons for not just children but also their parents. Frankly, the episodes on consent and the importance of science should be required viewing. With this reboot, AppleTV+ demonstrates they understand the timeless appeal of Jim Henson’s creations better than anyone since Jason Segel in 2011’s The Muppets. Back to the Rock is a celebration of the best in all of us, and worthy of your attention.