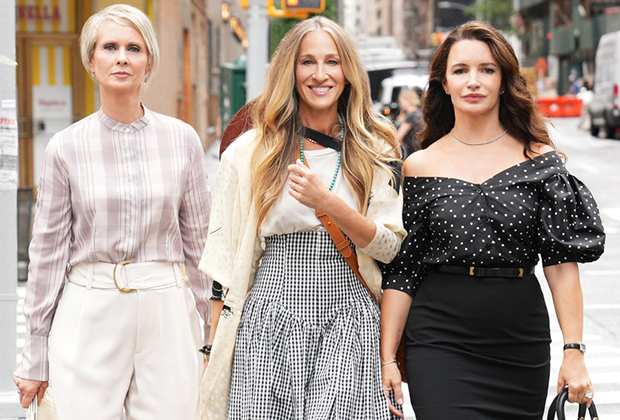 First Looks: 'How I Met Your Father' and the 'Sex and the City' Sequel Series, 'And Just Like That'

They’re remaking, rebooting, reviving, and sequeling everything these days except the one show that I’d actually love to see get a reboot: Quantum Leap. Why not? It’s so perfectly suited to network television with stand-alone episodes and maybe this time a series-long arc that actually makes sense? (I rewatched the finale of Quantum Leap a few years back, and it’s still a bloody mess).

Instead, we’re getting a sequel series to How I Met Your Mother called How I Met Your Father starring Hilary Duff, Christopher Lowell (Piz!), Tom Ainsley, Tien Tran, Francia Raisa, and Suraj Sharm. Look, Mom! They’re not all white! Josh Peck will also recur, but how the hell are we supposed to know the difference between Piz and Josh Peck? It’s like casting Johnny Knoxville and Josh Duhamel in the same show. Here’s our first look at the series from showrunners Isaac Aptaker and Elizabeth Berger.

The "How I Met Your Mother" sequel series is going to be legen… (wait for it) …dary.

Take a first look at Hilary Duff and the cast of Hulu's #HowIMetYourFather. https://t.co/md9dJ6klJd pic.twitter.com/inyCkvFgUv

Kim Cattrall also stars in the series, and ironically, we also have our first teaser trailer for the Sex and the City sequel series, And Just Like That, which will not feature Catrall. Sarah Jessica Parker, Cynthia Nixon, and Kristen Davis are back navigating life and love in the city in their 50s. Chris Noth, Evan Handler, and David Eigenberg will also return, and Sara Ramirez has been added to the cast, as well. Willie Garson was also apparently able to make an appearance before his unfortunate passing.

And Just Like That will premiere on December 9th.


← How Is Letitia Wright Screwing Over 'Black Panther 2' Now? | What's the Deal with Lil Nas X Being in an Episode of Maury Povich's Show Next Week? →