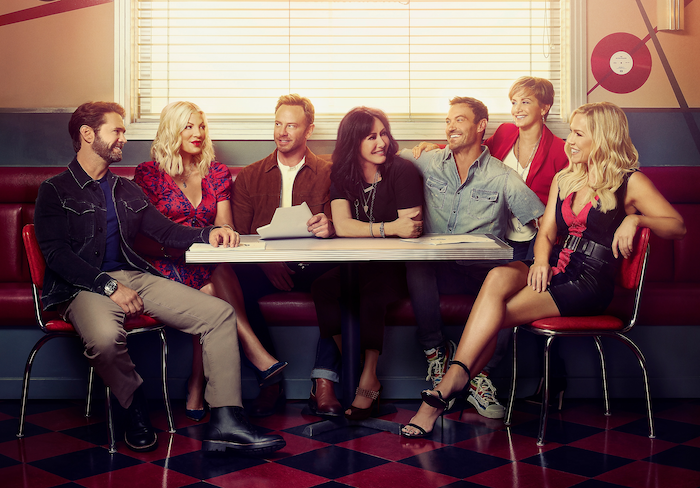 Fact Checking 'BH90210' Episode 5: The Weird Anti-Me Too Flex and the Return of [Spoiler]

Excuse me, I may be borrowing trouble here, but I’m low-key devastated there’s only one more episode of the first season of BH90210. I need a moment. Talk amongst yourself, while I feel what I’m feeling, set to Boyz II Men.

Despite the weird tone episode (we’ll get to that in a minute,) I’m still all-in on this reboot, and I’m really hoping that we get another season next summer. As I’m sure you probably know, the summer episodes of Beverly Hills 90210 were always the best ones, (see: Donna and Brenda in Paris) so it’s only fitting that this summer series would be pretty great, too.

The later episodes are coasting less on a fictional take on the real-lift actors’ lives, so there’s less fact checking to do, since the episodes have switched to focus on the plotline, but that’s not to say there’s not fact checking to be had. So let’s get in to it, spoilers below friends!

OMG! Did you recognize the cold open outfits?!

OK, first thing’s first, did you recognize the cold open outfits from this episode (gif of them, above)? Let me refresh your memory, if not, since it’s one of my favorite 90210 scenes, ever.

YES! Friends, those were the “Breaking Up is Hard to Do” outfits, complete with the choreography! They even put Jennie, Shannen, and Tori in the same order as in the original. Come, let us all bask in the glow of Emily Valentine wooing Brandon, even though he was a better fit for Kelly (Dylan and Brenda 4-Eva!)

The return of Jamie Walters aka Ray Pruitt—is he really a firefighter, now?

About every 4-5 months, the Pajiba slack will somehow turn to the subject of Jamie Walters, and his (still good, I might add) hit song “How Do You Talk to An Angel” which was a song that was played on his short-lived (but also good, I might add) Aaron Spelling-produced show The Heights.

Sadly, the song had more longevity than the show, and after it was cancelled, Jamie was brought over to 90210 to play Donna’s abusive boyfriend, Ray Pruitt, who pushed her down the stairs at their hotel in Palm Springs. (Note, I am typing all of this from memory because this plotline was a huge deal back in the day, and if you saw it, you’d never forget that moment.)

I digress—seeing Jamie Walters was a delightfully pleasant surprise, even if Ray Pruitt was the f*cking worst.

So, has the real-Jamie retired from acting to pursue a career as a firefighter, like in the show?
Yup—that is one hundred percent accurate. Walters is a certified firefighter/paramedic in Los Angeles county.

So, what’s with the weird anti-me too flex?

Oh, you noticed that too? (Yes, I understand I created this question to answer it, but man, the tone this ep was weird!)

Look, I have no idea why they have chosen this weird hill to die on—that post MeToo consensual workplace relationships are being affected, and that it complicates casual sex amongst co-workers, and in particular, people who are not equal in the workplace hierarchy, but here we are. If they were going for smart satire, it fell flat for me because it really came across as out of touch ’90s celebrities wanting to go back to a time that wasn’t that great for sexual harassment, where it was swept under the rug and just not talked about. It’s the same system that let Harvey Weinstein get away with (allegedly) raping women, for decades. No thank you, please 90210, if you come back for a second season (and oh my god, I hope you do) please drop this tone-deaf, stupid stance.

Why is show-Shannen always eating, in every scene?

I honestly have no idea, since she hasn’t commented on it publicly, but I thought it was funny.

What did Cole Hauser do to Jennie Garth?

You’ll recall that at one point, before the blame landed on Jamie Walters, that show-Gabby had the entire cast (sans Jason) sit down and list just who might be holding a grudge against them. The results were pretty funny—why would Anakin Skywalker hate Brian Austen Green?!

Jennie Garth volunteer Cole Hauser, and this mystery is driving me bananas because it’s not every day Cole Hauser’s name comes up in conversation, is it? No one is commenting on it, but it’s too specific (and obscure) to not have a basis in reality, in my opinion. So, if you know, let us know in the comments, because I bet it’s really, deliciously, petty.

You can find the full list of celebrities who might hate all or some of the cast, here, as Eonline lovingly compiled them for you.

Who is the stalker?!

Friends, as I said last week, my money’s on Denise Richards, and I’m standing by that. This show is leaning heavily into the meta, the petty, and the deep 90210 cuts, so I will be surprised if they don’t have (arguably) one of their most famous-guest stars come back to be the stalker, because actors are petty narcissists, as show-Jennie reminded show-Jason, this week.

Well, that’s it for this week, but before I leave you (don’t worry, we’ll be back next week to discuss the show’s finale) I want to share with you something I honestly never thought we’d ever get to see—the return of Doug!!!!!!

Yes—Scott Scanlon, who played Douglas Emerson (you know, the kid who accidentally shot himself?) reunited with some of the cast last week in Los Angeles to honor Luke Perry, and oh my god! It’s Doug!

Until next, week, friends.