On Grief and the Movies We Watch to get Through It

Friends, it’s been a sad week for me. My best friend and cat of 11-years finally succumbed to his super rare, super weird, autoimmune disease. The end came quickly, and thankfully I had a very kind doctor who was there to help make the horrible decision to euthanize much easier. It was written all over her face once she got his blood work back, it was time to let Buster go.

So I did. I stayed with him until the very end, and it was the hardest (and kindest) thing I could do for him. He was my buddy. I hauled his surly butt to three cities and two continents over the course of his life, and I know I will never have a kitty cat quite like him again. I miss him terribly, and I know in my heart I will miss him always. He was a once in a lifetime cat. For me, that’s heartbreaking, for the people in my life, that’s a relief.

To call him an emotional terrorist would be a start, but just a start. Buster took it upon himself, apropos of nothing, to begin actively hating any women who came into my home about the time he was five. First, it just started with blonde women. Then it was all women. By the end, it was basically all people but me. When I took him in for his final appointment, before we knew it was his final, the critical care doctor who saw him remarked “I’ve never met Buster, but I’ve heard about him. I was just in the back with him, and everyone else knows him, and loves him. Hopefully we can get him back to actively hating us all soon.” I was told that people who work in animal hospitals usually love the hard-to-work with cases the most—and Buster was one of the hardest.

Despite how sick he was at the end, our appointments had to be all-day affairs because they would have to sedate him, and even then, it would take an entire department to hold him down to draw blood. Buster was f*cking cool like that.

Make no mistake, the people in my life actively hated him, though, but not as much as he hated them. If you were a guest in my home, he’d stalk you, intimidate you, and if I left the room, he’d occasionally yowl in pain so it would appear that you had hit him while I was gone.

He may have been feral to guests but with me he was putty. This cat would chill with me, and let me hold him upside down while we walked around. You could dress him up (which of course I did, occasionally) and he was never bothered. For him, as long as he was with me, he was happy.

And he was happy. He had a very happy life—and even though the end came too soon, he went out purring, because I was there, stroking him until the very end. (I should note that he also went out fighting, because that’s how he rolled, and tried to keep his head up and alert, so he could attack, until the sedatives finally kicked in. He’s going to run a very tight ship in hell, believe me.)

The grief comes in waves, like grief usually does. In the past year, I’ve lost both my grandmothers, ended a long-running but very dysfunctional and not-working on-again, off-again relationship, so grief is a familiar companion by now. I know it makes you feel adrift, sad, and generally just rotten—and I also know, because I’ve suffered enough loss at this point in my life, that eventually you will feel better. The pain gets overtaken by happy memories, and the sadness drifts away except for the occasional jolt of realization that the person (or cat) you love isn’t here, physically, with you right now.

The love stays, though. That never goes away, and if you had told me that at seventeen, I would have rolled my eyes at you and thought you were talking to me in Hallmark cards, but at 34, I know the truth. Just because Buster is gone, it doesn’t mean the fierce, wild love that cat had for me is gone, and it doesn’t mean that I stop loving him, either. It also doesn’t mean that any of you that ever encountered him in this life should relax, because now he’s no longer encumbered by a body, so he can come for you at any time. Be vigilant. If you’re reading this, he’s got your attention now, too, so I’d be a little cautious. He’s incorporeal, he has no body to hold him back from you, any longer.

So I’m left here, to grieve, and mourn the loss of my buddy, and celebrate the vicious, weird, and kind of remarkable life this cat had.

My friends have been very good about getting me out, calling to check on me, and keeping their thoughts about him to themselves (because again, he really was a wild, feral beast to everyone but me.) I spent all summer hibernating, taking care of him, because on some level I knew how it would all end. I did basically nothing social, my life revolved around his medication schedule, and feedings (which were done through a tube. Side note: if your pet is sick, never, ever hesitate to get the tube, it’s a miracle, and kept him alive, with a good quality of life, for weeks) cleaning up after his numerous accidents, and monitoring every part of his life to meticulously report back to his veterinarian, who bless her, really tried her best for him.

In the end, it was only fitting that the only thing in life that could take out Buster, was Buster’s own body. He would accept nothing else as a worthy adversary.

I mercifully knew in my heart that after the initial shock of losing him wore off, it would be devastating to have reminders of his illness all over my home, so as soon as I came home from the animal hospital, I threw out everything that was related to his illness, so all that remains are the numerous laser pointers he loved so much, some toys, and the memories of better times.

He’s given me a few signs, too. One of his favorite things to do was park himself on my bed as I changed the sheets, forcing me to do it on top of him, because he was a weirdo. When I changed my sheets the day I lost him, somehow a shirt was in the pile, even though I checked for things like that, and when I laid the top sheet down, the shirt made it look exactly like he was under the covers once more, in his preferred spot. In quieter moments, when the sadness isn’t overpowering, I’ve felt overwhelming feelings of love and joy, and I know that’s him letting me know he’s OK, and that he’s still here, on some level. I feel it in my bones that he’s grateful I made the decision that he could stop fighting because he would have soldiered on for as long as he could make his body hold out, and the end would have been more traumatizing.

I know I will recover from this, eventually. It will take a while, and it’s going to hurt a lot. With grief, the only way out is through.

I’m still kind of lost, though, and I know that there are going to be a lot of quiet moments, when I’m by myself, where I will miss my constant companion for the past 11-years like hell. Because I loved him and the more you love someone, the more it hurts when it’s time for them to go.

Here I am, only 48 hours removed from his death, wondering what to do with myself and how to occupy my time, now that it’s not consumed by taking care of, and monitoring Buster. So I watch movies.

My force-myself-to-feel-happy movie is Working Girl, which of course I’ve already put on (and will probably put on again, because how many romcoms did Harrison Ford make in his prime?) I’ve had old Beverly Hills 90210 reruns on in background almost continuously (my friend and I even went to the Peach Pit pop-up restaurant last night, after having a few drinks at Lisa Vanderpump’s restaurants, because I thought it would help, and it did for a bit), and because I love action movies—I think I’ll let myself buy John Wick 3 on streaming, because all the dogs in it are very good boys and girls.

I can all but guarantee you that at some point, I will have to bust out the big guns, when the grief is really intense and focused, and indulge in Nic Cage’s Holy Trinity (The Rock, Con Air, and Face/Off, but I really hope you knew that already.)

I’ve also, of course, drunkenly watched the ending to Fast 7, like 5 times already, and sat in the dark while “See You Again” played because you do what you gotta do to get by, here, OK?

Ultimately though I know it’s not Buster I’m mourning for, but myself. I’m sad that I’ve lost my friend, and I will miss his presence in my life for a long time, probably forever. He lived his life the way he wanted, and he did it well, as I’m sure he measured it by two very simple criteria: how much time did he get to spend with me (a lot, I’ve worked from home for the past year and a half) and how many scars, emotional and other types, did he inflict on others? (A lot. Like, a lot, a lot.)

If you teared up at any point during all of this, know you made my a-hole cat Buster very pleased, wherever he is. His reach is now global, and will live on infamy, as long as this post is up. The greatest gift you could give him is your pain. He has extracted a toll from you, and for that, he is satisfied.

As for me, I know eventually I will be OK, too, because this is the contract we make with the animals in our lives (unless you have a pet tortoise or a Greenland shark, those suckers live forever) because we know we will outlive them. Sometimes they get taken sooner than you were ready for, and ultimately, you have to be prepared for that as well. My apartment feels weird and empty without Buster (even though I have a dog and cat, remaining) and I know that when the time is right, another cat will come in to my life, and I’ll go through this cycle all over again.

There will never be another Buster, though—and eventually I know I will get to a point where I celebrate that, because he was a one-of-a-kind cat and I was lucky to have the friendship and love I had with him, but right now, that thought breaks my heart and I miss him so much. 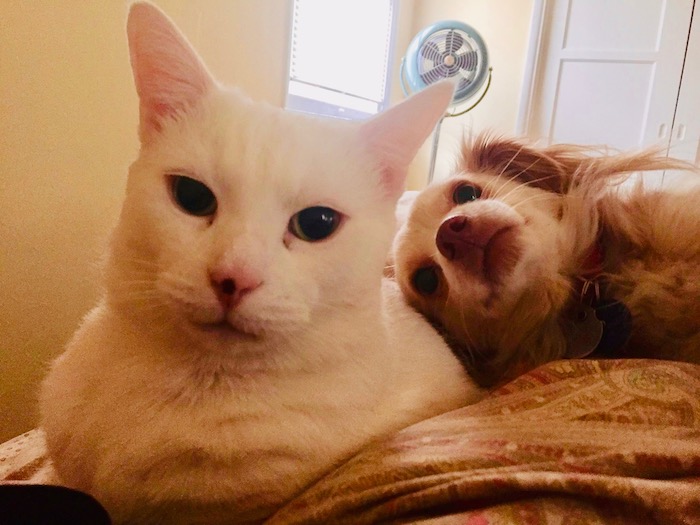 So I’ll put on another movie and let grief be my companion, while I ride this out.