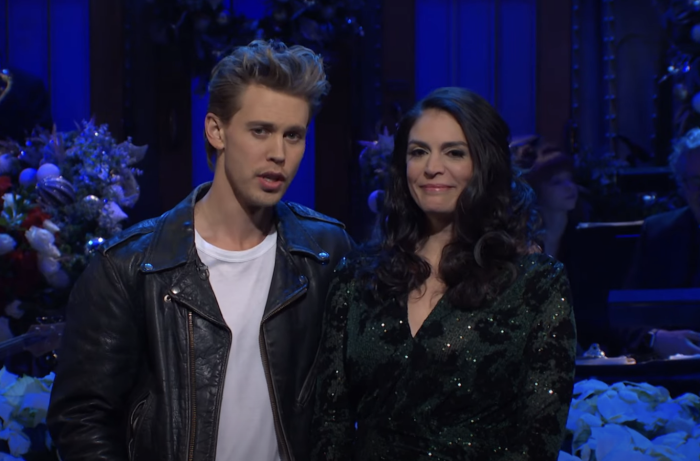 Cold Open — For the year’s final cold open, James Austin Johson pulls out the Trump impression, and I don’t hate it as much as usual because 1) I heard James Austin Johnson on Maron this week, and he’s good people, and 2) the cold open is about Trump’s $99 NFTs, which is perfectly suited to JAJ’s impression, which is untethered from reality. Mikey Day’s Donald Trump, Jr. is here, too, but it’s not the same without Alex Moffat. Alas, the sketch draaaaags. (Watch Here) (Score: 5 out of 10)

Austin Butler Monologue — I have never seen Austin Butler outside of Elvis (which I loved), and he’s a nice kid. Also, he sounds like Elvis, and he loves his mom. Whether he’s funny remains to be seen. (Watch Here) (Score: 5 out of 10)

The Phrase that Pays - It’s “The Wheel of Fortune” but without the wheel, and Austin Butler’s contestant is some kind of savant, to the consternation of the other two contestants who think he is cheating. It’s a nothing of a sketch, which may not bode well for the rest of the episode. (Score: 3 out of 10)

A Christmas Epiphany — It’s a pretape — a black-and-white It’s a Wonderful Life type thing, where Butler plays a character who sees inside a house window at a family and realizes what he’s missing and rants about his lack of family while the family inside the house freaks the hell out because there’s a guy standing outside the window. Much better. Now we’re cooking. (Score: 7 out of 10)

Marzipan — A bunch of British kids freak the hell out about how awesome Marzipan is. It’s a delight, and a solid absurdist sketch that Bowen Yang steals. For a young cast, this year’s SNL seems to have found its groove already (I attribute some of that to Sarah Sherman, whose sense of humor seems imprinted in a lot of the best sketches). (Score: 6.5 out of 10)

The Oasis — They’re at an old folks home, and old-lady Cecily, Ego, and Austin are really excited to see Jewish Elvis, who is played by Sarah Squirm. This Jewish Elvis sings and complains. Austin Butler is funny! (Score: 7 out of 10)

White Elephant Gift Exchange — It’s a Yankee Swap, and Austin Butler’s character gets enraged when someone steals his catchall gift. There are a good 30 seconds in this sketch. Unfortunately, it’s about 4 minutes long. (Watch Here) (Score: 5 out of 10)

Jennifer Coolidge is Impressed by Christmas Stuff — Chloe Fineman has a terrific Coolidge, not that there was any doubt. “A big cup of eggnog. Kind of weird. Tastes like I’m drinking Santa’s c*m!” Short and sweet. (Score: 7 out of 10)

Please Don’t Destroy — The Please Don’t Destroy guys pitch a new Plastic Shirt called Plirts to Butler — it’s great for avoiding wine stains — and their investment pitch, as things do in Please Don’t Destroy sketches, gets wildly out of control. Good sketch. Butler is hot. Genuinely, whatever it is that Elvis had, Butler has a little of it it, too. It’s not clear if it translates outside of Elvis-related material, though. (Score: 7 out of 10)

Radioshack — Cecily gets another goodbye sketch in the form of saying goodbye to a character named Cecily at Radioshack. Her gift is “Casual Elvis,” and he sings “Blue Christmas” to and with a crying Cecily.