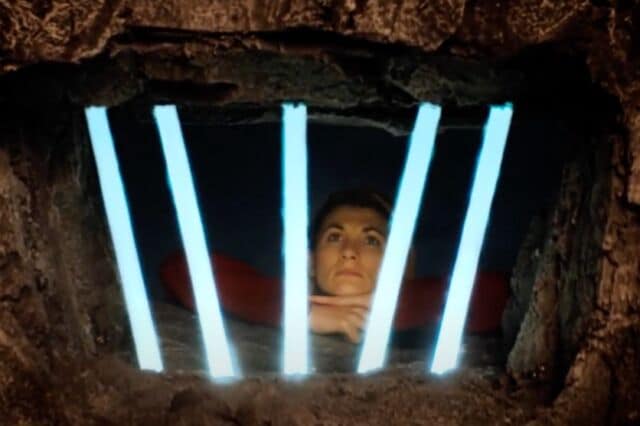 'Doctor Who' Recap: 'Revolution Of The Daleks' And Return Of The Jack

Welcome back to the Whoniverse, even though it’s only a brief visit before the winter horrors continue! The New Year’s Day special was chock full of callbacks, and saw the return of a legend and the departure of two companions. Would Chris Chibnall hear my prayer and keep the Lovely Graham safe during his last trip in the TARDIS?

‘Revolution of the Daleks’ follows on from ‘The Timeless Children’, with The Fam back on Earth thanks to Doctor Ruth’s TARDIS, and Thirteen in space prison after being arrested by the Judoon. Still reeling from the revelations about her heritage, the Doctor has had a couple of decades to stew, but remains remarkably cheerful and just about sane. For the most part. She’s in prison with a rogues’ gallery of Whovian villains: a Weeping Angel, some Bad Ood, that cute chompy Pting thing, and even the Silence. But what’s that? A handsome devil pops up in the cell next door, and it’s only Captain Jack Bloody Harkness, come to rescue her. HUZZAH! (I will never apologise for how much I love John Barrowman, so there.)

It’s quite a crowded episode in terms of characters, so Captain Jack doesn’t get as much time to shine as I would like (just give us more Torchwood already!) and is often relegated to playing the role of Information Bomb. But the rescue is Classic Jack: he got himself arrested, worked his way up to her cell block, and managed to secrete some gadgets, uh, on his person, to help with the rescue. MacGuffin 1: a space/time zorbing bubble, which gets them out of the cells, and then MacGuffin 2: his handy transporter doodah. Hooray!

Not this throwback 😭#DoctorWho pic.twitter.com/ftuL5bZiI4

Back on Earth, The Fam are kind of mopey and grumpy, but a potential case has caught their attention. In a callback combo, the remains of the Recon Dalek from last year’s New Year special ‘Resolution’ have landed in the entrepreneurial hands of Jack Robertson (Chris Noth, forever Mr. Big) from ‘Arachnids in the UK’, and his brilliant idea is to use the technology to make Dalek Cops without the squishy innards. Because All Cops Are Daleks. The government’s new Technology Minister, Jo Patterson (Harriet Walker), is excited and puts in an order. Later, Patterson uses a whole bunch of Aunt Lydia ‘freedom from’ rhetoric to become the Prime Minister for about five minutes until her new ‘law and order drones’ exterminate her. She ain’t no Harriet Jones, folks.

What could possibly have gone wrong with the Dalek Cops plan? Unfortunately, Mr. Big’s resident brainiac, Leo The Science Guy, got a bit Jurassic Park with the squishy remnants of Recon Dalek and made a clone. (You’ve got to risk assess your mad science, people!) Mr. Big thinks it’s gross, and orders Leo to incinerate it, but Clone Squishy rebels, opting instead to become an evil backpack and Ratatouille poor Leo into secretly making a squishy clone factory. Following so far?

It’s a somewhat salty reunion with The Fam for Thirteen and Jack, but they soon get into the old dynamic once she gets wind of the Dalek Cop situation. Because if there’s one thing that will help Thirteen remember who she is, it’s facing Daleks again. Once the squishy clones have beamed themselves into their new shiny Dalek casings, she finds herself in the odd position of calling more Daleks in to solve problem A. (They’ll create a whole other problem B, but luckily, Jack’s got some Actual Bombs as well as Information Bombs.) I guess the enemy of my Dalek is my other Dalek. If there’s one thing Daleks hate more than, well, anything that isn’t them, it’s anything that’s a slightly impure version of themselves. Extermination ensues, and sadly, far too much Dalek Monologuing. It takes maybe ten minutes for SS Daleks to exterminate all the Dalek Cops, but then Mr. Big ruins everything by trying to make friends with the SS Daleks, and selling out the Doctor. BOOO!

It’s OK though — remember the spare TARDIS from the start? Thirteen tricks the SS Daleks into piling in, and then she locks them in, destroys it and sends it into the Void, which sounds like overkill, but these are Daleks, so it’s probably about the right level of kill.

Just when she’s ready to take The Fam to the Meringue Galaxy for a treat, Ryan stops sulking for a moment to tell her he’s quitting. OK, OK, maybe I’m being unfair, but Ryan has been a bit of a Debbie Downer of late. Yaz is staying though. That leaves the Lovely Graham, who was NOT exterminated or blown up (HOORAY) but decides to stay home with Ryan and teach him to ride a bike instead of carrying on. SOB. At least he’s OK. NEVER HARM GRAHAM.

Jack is off to visit Gwen, who — despite not appearing on screen — had the absolute Most Gwen reaction to seeing Daleks again, reportedly taking one out with a moped and her son’s boxing gloves. (BRING BACK TORCHWOOD ALREADY! JEEZ!)

And so, it’s just Thirteen and Yaz for a while. But what’s that I hear? Could it be a teaser for a new companion?

Welcome to the TARDIS… ✨ #DoctorWho pic.twitter.com/af2dowAW05

It is! Comedian John Bishop is set to join the team, and I’m here for it; comedians have done well on Doctor Who before, and I suspect he’ll bring a lot of entertainment to the mix. Let’s face it, Yaz isn’t the most fun companion we’ve ever had, and perhaps a slightly smaller team will give more for her to do besides stand in a straight line of companions behind Thirteen, looking a bit confused.

‘Revolution of the Daleks’ is one of those episodes that’s kind of a hot mess but a lot of fun nonetheless, and that’s FINE. Barrowman and Noth were clearly having a blast, and Chibnall didn’t kill Graham, so that ticked all the boxes for me. Next season will be shorter than anticipated, because of coronavirus restrictions, but it should be with us later this year.

The TARDIS has made a few booboos with dates and places before, which have caused practical and emotional issues for previous companions. (Time and space are quite big, OK? She’s doing her best!)

For everyone hoping to get a reference to Rose, thanks to Jack for obliging! Remember that it was Bad Wolf Rose who resurrected Jack the first time he was killed… by Daleks, of course.

When Thirteen sees the Silence, she says “Oh, I forgot you were here!” Classic Silence.

Clone Squishy zapped Science Guy with his tentacles — is that a thing now?

Clone Squishy sure got that clone factory working quickly — so much so that I wondered if the timeline of the episode had been tweaked a bit in the edit. Maybe Clone Squishy is just extremely efficient as an evil backpack.

The ending with Ryan and Graham, and the little glimpse of Grace, was cheese-tastic, but cute, and it means we leave these characters almost right where we found them.

← 'Sylvie's Love': Cooking Show History and the Demands of Domesticity | A Desperate Trump Tried to Shake Down the Georgia Secretary of State →