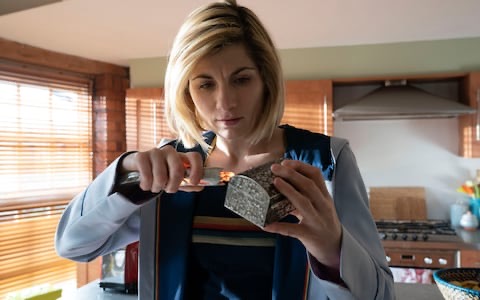 You Can Finally Get Excited About ‘Doctor Who’ Again

I’ve a feeling we’re not in Filler Episodes any more… After some uninspiring recent episodes, Chibnall gave the show a bit of a kick this week, and with a bit of something old, something new, something buried and something blue, delivered some genuine shocks and thrills with ‘Fugitive of the Judoon’. Huzzah! Spoilers will follow and they are BIG ONES!

Never dare Monday to do its worst. It might hear you — and this one certainly did. The set-up for episode 5 seemed straightforward: here’s Ruth (Jo Martin), and her slightly shifty husband Lee (Neil Stuke), having a normal-as-you-like morning in Gloucester. Meanwhile, the Doctor’s facing some questions from the Team, like ‘whatcha doing?’ and ‘where have you been?’, which she is reluctant to answer with much detail. Suffice to say, she’s definitely haunted by the image of Gallifrey burning, and spending her spare time trying to track down the Master. It’s not going well. Fortunately, the questions are interrupted by some familiar voices: the Judoon, with their iconic barking beat poetry. There’s a wrong’un in Gloucester apparently, and those Space Police Rhinos are going in. It’s a welcome distraction for Thirteen. Not on her watch…

The Judoon, first seen on the Moon in ‘Smith and Joon Jones’, are perfect Doctor Who creatures. The satire is there, and they look weird, but there’s a lightness of touch as well. They are offended when people are rude to them. They blow up knitting needles then pay compensation immediately. They get annoyed when someone cites regulations back at them. They are heavy-handed and terrifyingly trigger happy, but they exist within a distinct set of rules. They can be adversaries but they can also be allies. They are a great mix of scary and silly. Perhaps it’s because they haven’t been overdone like the Daleks or the Cybermen. Perhaps it’s because they mix the high-tech weaponry with a big dabber pen to mark the ‘processed’, which I like to think they take to the Bingo later. Brenda, don’t forget your dabber! No chance, Mabel! 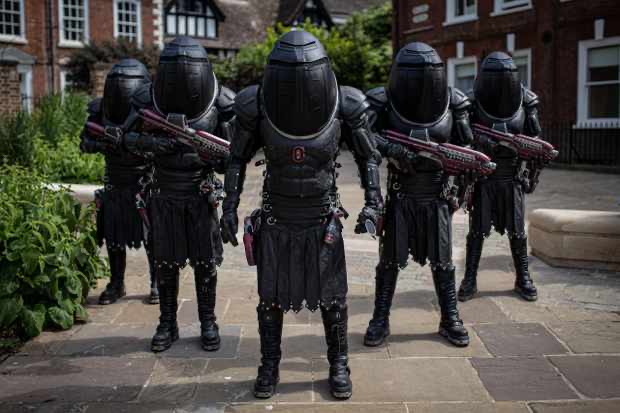 The Judoon are predictable; it’s the identity of those who hired them that’s the big shocker of the episode. And oh boy, it was a good one. In hindsight, the clues were there: like Commander Gat (Ritu Arya) referring to Lee as Ruth’s “faithful companion” right before he was executed. And doesn’t ‘fun but snarky tour guide’ sound just like a perfect cover job for the Doctor? It’s a huge twist nonetheless, one that makes and re-writes history. Major props to the show for keeping this under wraps; this is how Doctor reveals should work, folks!

Lee’s sacrifice for Ruth felt very different on a second viewing, because it tied in so neatly with the countless companion sacrifices we have seen over the years. (And at the same time, Ryan and Yaz volunteer to create a diversion to let Thirteen get away, so PARALLELS.) Ruth’s Doctor, when she activates the ‘in case of emergency, break glass’ feature, seems to hate the loss of Lee a lot less than other incarnations might, but she’s busy — she doesn’t have time to mourn.

Which Doctor is Ruth, exactly? It’s a mystery that Chibnall is happy to let us ponder about for now, though he is clear that she really is the Doctor, and it’s not a cheat move. A few clues to sift through: her TARDIS is definitely retro, but it is still the iconic blue box, and it was the First Doctor who got those circuits stuck. She doesn’t have a sonic screwdriver though, and she comes from a time where Gallifrey is alive and kicking. (The Time Lords were mostly kind of terrible, right?) She’s got fairly stern ‘old school’ vibes, like John Hurt’s War Doctor. But neither Doctor recognises the other, and the TARDIS doesn’t recognise Thirteen either, as it doesn’t get all squiffy and do a little redecoration when she is on board. Leading theories so far suggest that if she is from the Doctor’s timeline, then she’s much earlier in it, say between One and Two, which means our nicknaming system is screwed. Alternatively, she could be an alt-universe Doctor, or perhaps there’s something going on with reincarnation in addition to the regenerations. As Whittaker seems to be on board for at least another season, it seems like Jo Martin’s mysterious Doctor is an additional Doctor rather than the next one, but damn, does it feel good to be speculating again! 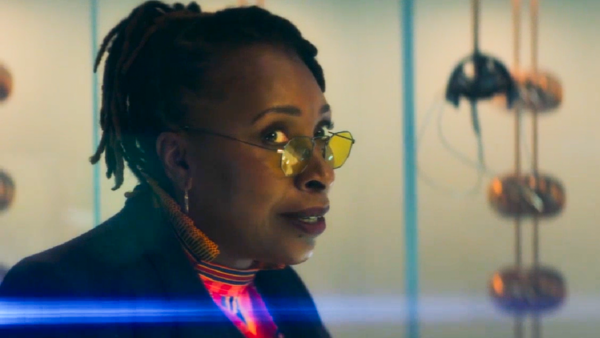 Whichever Doctor she may be, Doctor Ruth is not to be trifled with. I liked Martin a lot in the role; she brought a different energy to the Doctor, one that peers over her glasses in a stern way, scolds you for being stupid and then saves the day by being sneaky and clever. It’s always interesting when Doctors meet each other and don’t get on perfectly, isn’t it? A field day for shrinks, honestly.

If that wasn’t enough, the fleeting return of Captain Hotness himself raised many a squeeee across the world. One minute, Precious Graham is distracted by a cupcake (relatable), then he’s scooped up by a former rogue Time Agent, who materialises with jazz hands and leaps into his arms for a snog, which is absolutely the Most Jack Thing ever. Ryan and Yaz get scooped but not snogged, which I think they are secretly disappointed about, though once again, POOR YAZ with the sudden zapping. She’s going to get Space Vertigo soon. Jack’s mostly there for a cameo and a misdirection; this week’s promo materials laid it on thick that there would be a big surprise, and Jack big TA-DAH may have lulled viewers into thinking that was it. Sadly, it looks like that’s the extent of his involvement in this season, but mon dieu, wasn’t it lovely to see him again?

At the end of the episode, Thirteen’s head was spinning like everyone else’s. It was exactly the thing that this season needed to get things moving, and let’s hope that this breathless excitement continues for the rest of the season.

Philosophical scenario for you: your former and future self meet up. Who has seniority? The one who was there first, or the more recent and older one? If Ruth is from the past, is she like a revered ancestor, or is she a sweet summer child compared to a Doctor who has lived more lives and so a longer life in total? I fell down a bit of a Wordsworthian “the Child is Father of the Man” rabbit hole after this week, but in my defence, I’ve had a cold and my brain is sore and fuzzy.

Time Lords have got previous when it comes to hiding from themselves and others, like Ten hiding in a school under the protection of Martha in ‘Human Nature’ / ‘The Family of Blood’, and the Master losing himself in the identity of Professor Yana in ‘Utopia’. There was even a fake-out version of this in the Christmas special ‘The Next Doctor’. There are also multiple instances of Doctors hanging out together, like in anniversary specials and more recently, in ‘Twice Upon a Time’ when Twelve didn’t want to regenerate and spent some time with One.

Another episode, another instance of Team TARDIS looking like relatively useless companions. (Apart from being nice, of course.) When the Doctor has to play the role of companion because she’s been out-Doctored, you know the standards are high… Lee — derisively muttering “humans” to himself at one point — was presumably a Time Lord as well, having had the same training as Gat, though he didn’t seem to react to the sound of Thirteen’s TARDIS when he was at Mr Stalker’s bakery. Maybe he was too distracted by the sassy icing on Ruth’s cake, which appeared to have been done by Hagrid.

The Master warned the Doctor that everything they thought they knew was a lie, which set up this latest identity crisis nicely! Is Doctor Ruth part of the timeless child arc? Speaking of which, I’m sorry to throw this flashback at you, because SOB, but do you remember the reference to the Children of Time? Could that be connected?

Jack’s primary reason for showing up was to deliver joy. The second reason was to deliver another story arc for us to think about: “Beware the lone Cyberman… Don’t give it what it wants. At all costs.”

“What’s in the box?” If you can hear this line and not, you know, go immediately to “what’s in the boooooox” and imagining that moment from Seven, you are a better person than me.

I’m not saying that I got distracted by Judoon-themed rhyming this week, but I’m not not saying that. I definitely didn’t start writing fake quiz questions for Judoon Mastermind. (In The Wizard of Oz, what was the name of Dorothy’s dog? What’s the Prime Minister’s nickname? Which chocolate bar should you save the last piece of, for someone you love? What do you call bread mix when it’s uncooked?) Definitely not. Cough.

Finally: “It’s not a nickname if you give it to yourself, is it?” Uh, Doctor…

Next time: Something creepy is afoot in ‘Praxeus’!