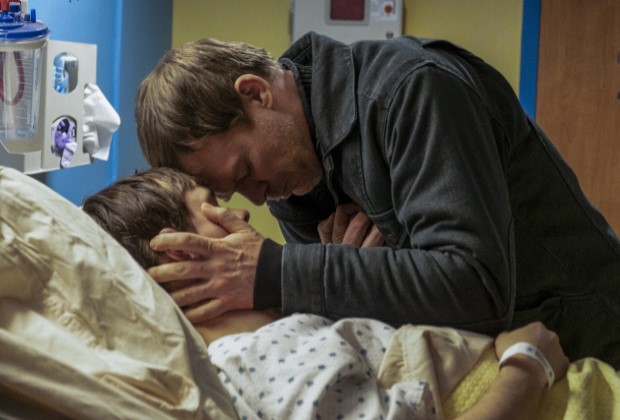 Dexter Needs to Work on His Parenting Skills

Dexter: New Blood got a welcome visit from the past in this week’s fifth episode, the midway point in the series. Our old friend Lieutenant Angel Batista (David Zayas) makes a surprise appearance, and we might get a chance to see more of him. Batista is a speaker at a conference in New York attended by Sheriff Angela Bishop and podcaster Molly Park. The two head to New York to attend a conference on missing people and check in on Matt Caldwell, whose father insists is staying at a swanky hotel in New York.

Matt Caldwell is dead, so obviously he is not staying in a fancy hotel, which Angela and Molly soon discover, leaving them with unanswered questions, namely, “Why is Kurt lying about his son?” After his lecture, Angela also speaks to Batista about the missing girls in Iron Lake, and Batista suggests she “follow her gut.” He also says her case reminds him of the Trinity Killer investigation, which prompts him to mention the detective who worked on the case, Debra Morgan and her brother, Dexter. Both died, he tells Angela. He also adds that Dexter had a son named Harrison, at which point Angela starts to put the pieces together with another piece of information she receives in this episode from her daughter, Audrey.

Back in Iron Lake, Audrey attends a party with Harrison to celebrate his heroism in preventing Ethan from shooting up the school. Only those on Ethan’s kill list are invited. Harrison, who is upset that his father doesn’t believe his story about defending himself against Ethan, accepts too many drugs during the party. Before he ODs, he tells Audrey that Dexter’s real name isn’t Jim Lindsay. Audrey recalls this later and tells Angela. After Angela puts that information together with what she heard from Detective Batista, she looks up Dexter Morgan’s obituary and realizes that he and Dexter are one and the same.

This is not a hard lie to navigate. Dexter is not suspected as a serial killer, so all he has to tell Angela is that, after the death of Debra (and his own wife, Rita), he decided to change his name and start all over someplace new far away from Miami. If Batista decides to visit Iron Lake, it could get more complicated, but I think Angela will buy that story.

Angela has a more pressing matter, anyway, namely Kurt Caldwell and why he continues to lie about his son. There has never been much doubt that Caldwell is behind the missing girls, but his motivations are unclear and confusing. This week, he abducts another transient, although she doesn’t play along with his game. While he is watching her on a video camera, she removes her top in an effort to entice him. “Isn’t this what you want?” she asks, but Kurt loses his temper and shuts off the camera. He then tries to let her go so that he can shoot her as she is running away, per usual, but she refuses to run. Instead, she comes at him, and Kurt shoots her in the eye and loses it again. “It wasn’t supposed to happen like this!” he yells in the same way that Dustin Hoffman yells “Hot water burn baby!” in Rain Man.

So, his murders are ritualistic, and Kurt gets upset if they don’t follow a specific pattern. Is this some kind of serial killer OCD?

Dexter himself, meanwhile, uses Harrison’s overdose as an excuse to murder. He does not go after the student who gave Harrison the drugs, nor the person who sold the drugs to the student. He goes after the supplier, but before he can kill him Dexter-style, Sergeant Logan shows up outside the supplier’s house. Dexter instead improvises and pours a lethal amount of the supplier’s own drug into his nose before skedaddling when the cops show up. Some might call that murder. Some might just call it good parenting!

Harrison, however, has about had it with Dexter. He decides to skip town, but before he can leave, Kurt Caldwell offers him a hot meal. Kurt also offers Harrison a job at his diner and appears to want to mentor Harrison. Since Dexter isn’t offering the guidance he craves, Harrison looks to Kurt as a father figure. That cannot end well.

Next week: Things continue to heat up!