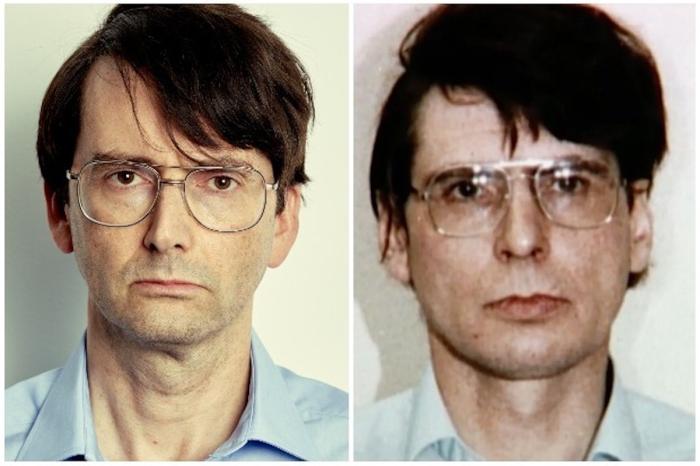 In Des, David Tennant plays Dennis Nilsen, another in a line of villainous Tennant characters (Jessica Jones, Deadwater Fell, Good Omens, Fright Night). However, there’s nothing charismatic or even particularly compelling about Dennis Nilsen, a real-life Scottish serial killer and necrophile, who killed at least 12 men between the years of 1978 and 1983.

In fact, what makes Dennis Nilsen unusual is how indifferent he is to his own sins. The three-episode drama opens not with an investigation — the missing men were all gay and socioeconomically disadvantaged and had basically fallen through the cracks during the Thatcher era, so there never was an investigation — but with the arrest of Nilsen while police were inquiring about pipes clogged with human bones in Nilsen’s apartment building. When asked about the bones, Nilsen lethargically confesses to murder, as though calling in a prescription. Later, in the police car on the way to the station, Nilsen is asked if the bones belong to one man or two. “Fifteen or sixteen, since 1978,” Nilsen says to the officers with almost a yawn.

Tennant’s performance — creepy, listless, detached — is technically precise, and he delivers it as though he’s been completely drained of personality. Nilsen himself is an interesting one, on paper at least. Nilsen would lure men back to his apartment; kill them; ritually bathe and dress them; and then after a few weeks, he would dissect and dismember the corpses, burning them or flushing their remains. He also engaged in sexual acts with the corpses, although Nilsen insisted — again with zero emotion — that he never penetrated the bodies.

Unfortunately, the thing that makes Tennant’s performance so perfect — the monstrous indifference toward the murder, necrophilia, and dismemberment — is also what leaves Des dramatically lacking. Nilsen is not a riveting person, and that’s the point. He was a civil servant, and a mediocre one at that, and he talked about his murders the same way he’d talk about mowing the yard or cooking a pot of rice.

There is no investigation, no mystery, and no suspense, Des is largely about the police interrogations and the eventual trial. The series is roughly three hours of listening to Nilsen drone on about the men he murdered, what he did to their bodies, and the locations of their remains. In fact, it takes several hours before the police can even arrest him because Nilsen cannot put names to his victims and because many of his victims had been lost to the system. The police had all the evidence they needed to prove that Nilsen murdered multiple men, but aside from the remains, there was little evidence that these men existed in the world. The series doesn’t probe too deeply into Nilsen’s motivations, either, and I’m not all that certain that Nilsen understood them himself. “Why did you kill all of these men?” the police ask at one point. “I don’t know,” Nilsen says, “why don’t you tell me?”

You know how you might say, “I would listen to David Tennant read the phone book”? What’s so bizarre and incongruous about Des is that Nilsen describes his murders as though reading the phone book. Nilsen has the distinction of being not only one of the most prolific and cruel serial killers but the most boring, which makes for a brilliantly accurate performance from Tennant but a surprisingly inert series, although Des still operates well from a purely documentarian’s standpoint — the details are incredible, from the production design to the cinematography, to the stellar performances. It’s just as a piece of entertainment, Des is lifeless.

← Yes, There Are Now Coronavirus Romance Novels | Trump Complains, Gets What He Wants, Continues Complaining Anyway →