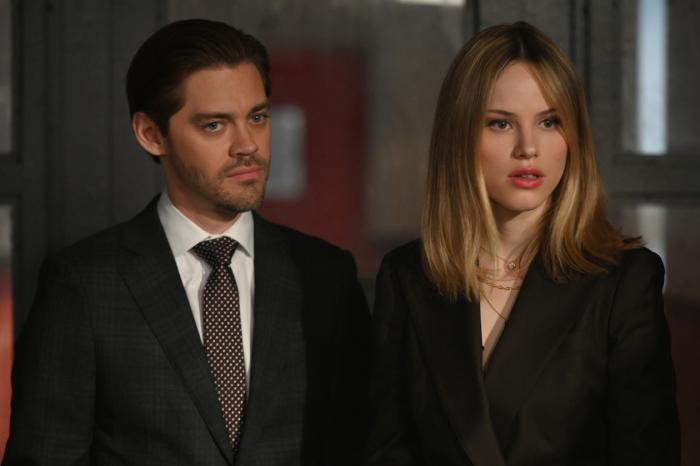 Last September — an unimaginably long time ago — I wrote about the pilot of Fox’s freshman procedural drama Prodigal Son and called it “The Fall’s Guiltiest Pleasure.” I still stand by that assessment, too, but as the season progressed it ceased to be appointment viewing for me. Or rather, we started recording Podjiba when it was airing and frankly, I can either drink and watch television or I can drink and talk about television — I can’t do all three at the same time, I’m not a living GOD. Point is, I fell into a pattern of letting a couple of episodes go by and then binging them back-to-back on demand, which is pretty much the perfect way to consume guilty pleasure television. Prodigal Son makes it so easy, too: there’s an overarching mystery (“the girl in the box”), but the revelations are doled out in precisely moderated increments, and no twist is so important that it could really be spoiled if you’re not caught up. Meanwhile, the cases of the week — the procedural elements — have eked out their own special niche in a fairly cluttered landscape: Classy Upper Crust Murder. Nearly every episode finds Malcolm Bright (Tom Payne) assisting NYPD’s Major Crimes unit as they hunt for killers in high society, from international watch thieves to influential uptown mommy bloggers to ballerinas. It trades gritty “ripped from the headlines” pretensions for a sort of eat-the-rich vibe that’s balanced by humor and some fairly solid surprises. All that plus a doting daddy/serial killer played by Michael Sheen, and yeah — Prodigal Son is the kind of batty escapism that’s perfect for a pandemic. Or it was, until I got to the season finale… and realized the show deserves more credit than even I’d been giving it.

The most surprising thing about the season finale is that it was, in fact, the season finale at all. Like the rest of the television industry, Prodigal Son’s production was interrupted due to the coronavirus outbreak, and their 22-episode season was suddenly reduced to 20 episodes. Luckily, however, series creators Chris Fedak and Sam Sklaver had basically been building to a 5-episode villain arc for the end of the season, with Dermot Mulroney as the guest star — and they shot it out of order. By the end of February, episodes 21 and 22 were already in the can, leaving episodes 19 and 20 to be shot in March. When they realized that production would have to shut down early, they had enough time to essentially condense those two episodes into a couple of connective scenes that could be added to the final episodes. Thus the 5-episode arc became 3, and though you can tell the pace of the events is a little rushed in spots, it’s more than made up for by the confident climax the show delivered. A climax that wasn’t really a cliffhanger, so much as a total paradigm shift for the show. You see, Prodigal Son has always seemed to hinge on the question of just how much Malcolm takes after his father. Is he too capable of murder? And all season long, Malcolm exhaustively proved that he wasn’t. It got to the point where even I thought the show was beating that dead horse a little too hard — until the finale revealed that it was all a misdirect. Malcolm wasn’t the one we should have been worried about… 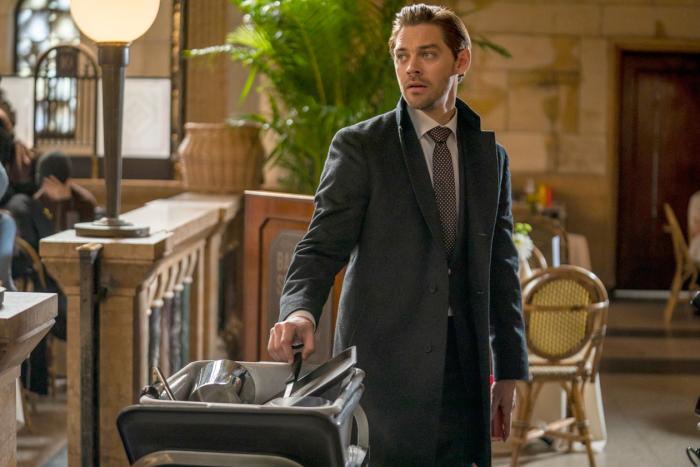 … because his sister Ainsley (Halston Sage), a cutthroat young reporter, is the one literally cutting Dermot Mulroney’s throat in the final moments of the season. Mulroney’s character, Nicholas Endicott, is a fabulously wealthy and politically connected entrepreneur with a lot of secrets to protect — and those secrets turn out to be the missing pieces we need to understand the mystery of the Girl in the Box. All season long, Malcolm has tried to uncover the identity of the unknown victim he remembers seeing in his basement just before his father was arrested, only to find out that his girlfriend Eve is her sister — and that his father, Martin, never actually killed her. The girl, Sophie, was a young runaway who began working for Endicott, and eventually became privy to a lot of damaging information about her employer. When Martin abducted her, she didn’t even realize he was The Surgeon — she thought he was an assassin hired by Endicott to silence her. She traded her secrets to Martin in exchange for her life, and when Martin was later arrested, he leveraged all that dirt to get Endicott to help him secure a sweetheart of a plea deal. One of the biggest suspensions of disbelief Prodigal Son demanded of viewers was accepting that a serial killer with dozens of victims to his name was somehow confined to a mental hospital in a large cell with a Persian rug, a wall of bookshelves, 24/7 phone access and a seemingly open-door visitor policy, so this reveal is a tidy way to clean a lot of that up. Endicott provided comfort to Martin throughout his conviction, as a carrot to keep him silent — and he also used threats to Martin’s family as a stick to ensure Martin’s compliance. When Eve finally finds her sister Sophie, Endicott hires a hitman to kill her and make it look like a suicide — and when Sophie kills the hitman in retaliation for Eve’s death, Endicott frames Malcolm for the crime. Endicott also starts wooing Jessica, Malcolm’s mom, and maneuvers to have Martin transferred to Rikers — while also making sure everyone in gen pop knows there’s a healthy bounty on Martin’s head.

Look, I’ll admit that this progression of events is where you really start to feel how painfully condensed the last run of episodes is, but the point is: Endicott nearly makes good on his threat to destroy the Whitly family. Martin previously warned Malcolm and Ainsley that the only way to stop Endicott is to kill him, and in a final confrontation between the siblings and the villain, Malcolm points a gun at Endicott’s head. Predictably, though, he can’t bring himself to pull the trigger — which is when Ainsley comes up from behind and slashes Endicott’s throat, then stabs him a few extra times just to make sure. And boy, is it bloody. The scene makes it look like she’s barely aware of what she’s done, as if she was operating in a fugue state, though she comes out of it when her father calls Malcolm — and of course The Surgeon proudly exclaims “My girl!” when he hears what she’s done.

That’s a lot of juicy drama to delve into next season — and I haven’t even mentioned the fact that Gil (Lou Diamond Phillips) was stabbed, and that Jessica (Bellamy Young) saved him, and that they’re totally in love. Will Malcolm cover up his sister’s crime or bring her to justice the way he did his father? Is this the start of a new, dark path for Ainsley? Will Jessica ever get those stains out of her upholstery? I’m very curious to see what Prodigal Son looks like when it turns into Daddy’s Little Girl instead, which is why I’m extra disappointed that FOX has yet to renew the series for a second season. The ratings have been steady all season, though Prodigal Son’s final episode only held a little over half the audience of it’s lead in, 9-1-1 at 8pm. It gets fine numbers, but not great numbers. I just hope that fine is good enough during a pandemic, especially when pilots are on hold.

Even if there isn’t another season on the horizon, though, Prodigal Son might still be worth catching up on. Michael Sheen is absolutely delightful as a man who loves homicide almost as much as he loves his family (or vice versa?), and Payne brings a manic glee to the broken Malcolm, a character who should be a tragic figure but who winds up being the driving force of the show’s unexpected humor. It’s also, for a procedural crime drama, surprisingly kind-hearted (the fact that more people don’t ship the adorably awkward crush between Edrisa, the medical examiner, and Malcolm is a damn shame). If you’re looking for a low-stakes quarantine distraction, I recommend this one! And if you’re a network executive trying to nail down your 2020/21 slate in the midst of pandemic and are looking for a just-fine freshman show to renew… uh, I recommend this one!