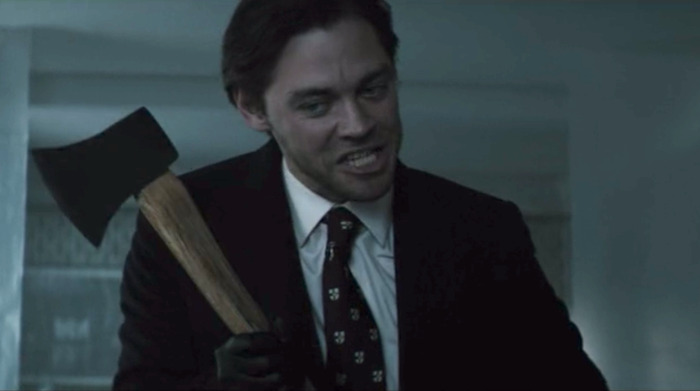 “I’m gonna chop off your hand!”

If I had to pinpoint the exact moment Fox’s new profiler-procedural won me over, it was when the lead character, played by Tom Payne, delivered that line whilst hoisting an axe to his shoulder. The scene comes about 20-odd minutes into last night’s pilot, and the twist is that, in this case, the axe-wielding psycho is the hero! Just because he was grinning with ecstatic glee didn’t minimize the fact that he was maiming someone in order to save their life.

And that’s the saving grace of Prodigal Son in a nutshell. The show owes a lot to so many other shows and movies that have already come before it (Hannibal, The Blacklist, Sherlock, even a touch of Lethal Weapon in the unpredictable protagonist), but the characters — and the performers — elevate the material by shining in ways you never quite anticipate. The elevator pitch is simple: This is Thomas Harris’s “Red Dragon” but reimagined as a father-son story between Hannibal Lecter and Will Graham. A lot of the early buzz around the show centered on the casting of Michael Sheen as a genius doctor turned serial killer named Martin Whitly, a.k.a. “The Surgeon,” but the performance Sheen turns in is the farthest thing from Lecter you could get. He plays the killer purely as a doting father, hampered by the inconveniences of his crimes but guided solely by his desire to have a continued connection to his son, Malcolm (Payne). And Malcolm, who has done his best to bury his ties to his father and pursue a career as an FBI criminal profiler, even changing his last name to “Bright,” finds himself looking more like a villain the harder he tries to walk the righteous path. He’s haunted by the things he saw as a child. He’s jittery and brusque and has a sick sense of humor. He can’t sleep, can’t eat, and his knack for putting himself in the mindset of killers makes his colleagues suspicious. If Martin hardly seems like a killer, then Malcolm is barely believable as a man of the law. The pilot finds him losing his job with the FBI only to have the NYPD come knocking on his door with a case that bears striking similarities to the murders committed by his father — forcing Malcolm to seek help from the very man he’d been trying to free himself from.

Like I said, it’s a familiar premise that retreads the thin line between hero and villain all over again. And the execution asks you to suspend a lot of disbelief. Malcolm apparently spent about a decade visiting his father in prison, AS A CHILD, in order to pick his brain about murderers, only cutting off the relationship with Martin when he decided to go to Quantico? And for some reason, Martin has enough criminal clout to have a massive cell all to himself, decked out like a study — complete with his own former case notes and private journals? There is a copy-cat killer on the loose, a former patient that somehow has taken literal pages from Martin’s books in order to commit his crimes — despite the fact that Martin has been locked away for twenty years now? The details are admittedly a little squishy, probably because the creators know that the details don’t really matter. We know perfectly well where this set-up is going. But the performances are sharp and surprising across the board.

Sheen, with limited screen time but the promise of more to come, is predictably excellent. Payne, who I was unfamiliar with previously (though Dustin was quick to point out he played a character called “Jesus” on The Walking Dead), is magnetic. He’s got a sort of Nick Stahl vibe going on, where you both root for him and understand why literally everyone else on-screen finds him off-putting. Lou Diamond Phillips lends a dose of gravitas as Gil Arroyo, the NYPD detective who knows exactly what Malcolm is worth, while Aurora Perrineau takes what could be a generic potential love interest part and grounds it with ferocious skepticism. But perhaps the biggest surprises come from the rest of Malcolm’s family. I was a little disappointed to see Scandal’s Bellamy Young appear as Malcolm’s mother, fearing she’d be wasted in the part. After all, with so much focus being pulled by the history and relationship between Malcolm and Martin, how much room would there be for her character to take root? But in the space of two scenes she nearly steals the whole damn episode, offering a glimpse of a buttoned-up woman who has by no means forgotten the crimes and deception that paraded under her very nose, in her own home. She’s fascinating. Meanwhile The Orville’s Halston Sage pops up as Malcolm’s little sister, a young woman who channeled her family history and natural intellect into being a reporter.

Thanks in large part to the cast and some slightly obvious but well-executed twists, the pilot was a helluva fun ride. The question, of course, is how Prodigal Son will maintain this momentum over the course of the season. I’d have pegged a copy-cat killer as a season finale stunt, not something to be blown at the very start of the show, and subsequently I’m not really clear on why Malcolm will need to rely on Martin moving forward. I’m also curious how the show will balance cases of the week vs. longterm story arcs, since sticking a serial killer profiler with the NYPD seems like it’ll have limited returns without some creative plotting. That said, it’s clear that Martin is hiding something, and his ability to manipulate the world from behind bars may be more akin to Kingpin than Lecter. Mostly, though, I’m excited to see these characters get some room to grow. And considering the show’s pedigree — created by Sam Sklaver (writer on Bored To Death) and Chris Fedak (co-creator of Chuck), and exec produced by Greg Berlanti — I think it has a lot of potential.

Point is, I may have already found may favorite new guilty pleasure. And the best part is, it airs right after 9-1-1!