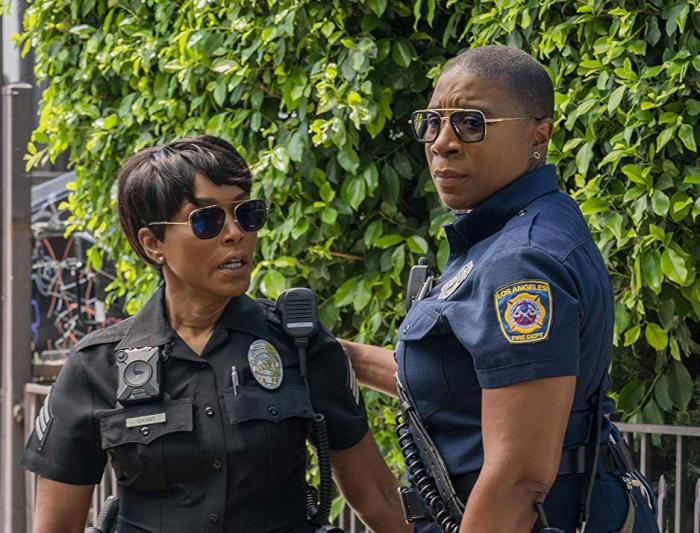 The “Florida Man” of network dramas is back for another season of viral news insanity, and the premiere episode basically ticked all the boxes we’ve come to expect from this crazy, beautiful diamond of a show. Did our favorite first responders tackle multiple emergencies that were not only incredibly disturbing but also based on real-life? You betcha! Did one of the main characters almost die? Of course! Did a natural disaster strike? Yes, duh, it’s the season premiere! So strap in, folks, because 9-1-1 is back — and so is my reason for living!

So, remember how Buck was horribly injured last season when that serial bomber blew up his firetruck, and there was no telling if he’d ever recover enough to work again? Well, this season picks up about 5 months later, as Buck… prepares to go back on the job! Does that seem awfully anti-climactic to you? Don’t worry, it’s a fake-out. You see, Buck has been busting his butt trying to recover from his injury and get cleared to go back on the job, and just when he seems to have made it, he starts VOMITING BLOOD AT HIS OWN SURPRISE PARTY. He suffers a pulmonary embolism (actually, a couple of them), and due to the clots, he has to go on blood thinners — which means it’ll take him even longer to return to active duty. But the real blow comes when Bobby informs Buck that when he does come back, he’ll essentially start on desk duty. Which is when THIS happens:

Don’t worry, there’s no way that’ll stick. He’s being a baby, basically, and while everyone around him tries to decide whether to kick his ass or let him sulk, Eddie steps up with the perfect plan: let Christopher handle it! Yup, Eddie drops his son off for the day and makes Buck babysit him, because, as Eddie points out, Christopher “never feels sorry for himself.” OOOH SICK BURN — the kid with cerebral palsy is more well-adjusted than Buck is! Anyway, Buck takes Christopher to the Santa Monica Pier to go on some rides and eat cotton candy, and it’s the greatest.

Just what Buck needed to lift his spirits. #911onFOX pic.twitter.com/AtDdi5zKfi

At one point, Christopher gently touches Buck’s face and tells him, “You’re gonna be OK, kid” — AND MY OVARIES GREW THREE SIZES THAT DAY. Obviously this moment is too sweet to last, so it makes sense that Buck turns around and almost immediately spots a huge-ass wave coming straight for the pier. Yup, the cliffhanger ending is that a tsunami is about to wipe out Santa Monica, and Buck is on the scene to save Christopher and probably a whole lotta other people because — ahem — he doesn’t need to be on the clock to save lives and be a meaningful person.

But that’s all stuff for next week. For now, let’s talk EMERGENCIES!

High-Speed Chase… With A Twist
It’s a classic Los Angeles set-up: Police officers pursue a speeding car on the freeway. When Maddie answers a 9-1-1 call about it, she realizes she’s talking with the driver — who is a teenager in a panic. He’s not trying to outrun the police, he’s simply unable to slow down because his car is malfunctioning! To make matters worse, he’s more worried about the repercussions of endangering his dad’s prized classic car on this little joyride than he is about, you know, crashing and dying. So now the high-speed chase is a high-speed rescue as Athena enlists Bobby’s crew — and his firetruck — to pull ahead of the driver and try to maneuver it into a controlled crash.

It all works out in the end, with the kid suffering only a broken nose — but in real life, high-speed chases don’t always end so fortunately. I found one story (out of Florida, natch) where police officers attempted to box in a car during a chase, but their methods broke several protocols and ultimately the car crashed, killing the teenage passenger (the driver is currently serving a 16-year prison sentence for vehicular homicide). In another story from 2012, a Texas teenager trapped in a car with a broken accelerator called the cops for help, resulting in a 90-minute chase that ended in a crash (the driver fortunately survived). Though I didn’t find any recent reports of firetrucks being deployed to slow out-of-control vehicles, I did find this WIRED article about why semi-autonomous Teslas keep crashing into firetrucks — and I’m gonna count it!

You’re Never Too Old To Use Protection
Bobby’s team is called to a fancy-pants retirement home, where an elderly man has locked himself in his room and is refusing to come out. Why? Well, his kids were visiting him and noticed mysterious marks on his stomach, which — upon further inspection — turn out to be just part of a wound that continues well into the man’s pants. Yup, we’ve got a flesh-eating STD, folks! But that’s just the set-up. The punchline is that Daddy won’t say who he’s been sleeping with, so they make an announcement to the other residents as they escort him out of the building. Essentially: If any of you slept with this guy, you’ll wanna get yourself tested, so feel free to come with us. One woman stands up. Then another one. Then a man stands up, because he slept with someone who slept with Patient Zero over there. Basically the whole damn center has probably been exposed to this mysterious crotch-rot!

It’s a slight case, as far as 9-1-1 emergencies go, but it has a whole lotta real-life inspiration. On the one hand, there’s been a lot of stories in the news over the past few years about the spread of STDs amongst the elderly, particularly in assisted living communities or nursing homes. One analysis showed a 23% uptick in STD diagnoses amongst people over the age of 60, which was more than twice the increase shown in the entire population over the age of 13. So yes — apparently you’re never too old to learn an important lesson about safer sex practices. But that’s just, like, general sexually transmitted diseases! The other facet to this case is the fact that, yes, flesh-eating STDs ARE A REAL THING. The one I’m pretty sure being referenced in this case is called “donovanosis” — a relatively rare disease that started getting some news pick-up last year when a woman in the UK was diagnosed. It starts out with painless sores, or ulcers, in the genital region, but if left unchecked those ulcers will get larger and spread, effectively destroying genital tissues.

9-1-1, true to form, took two actual not-good things and combined them to create one bite-sized bit of great television!

“Fetal Abduction” Is A Phrase I Didn’t Want To Learn
The main case of the night involved Maddie fielding a call from a woman who claims she has been stabbed. Unfortunately, she’s disoriented, can’t offer any clues as to where she might be, and quickly becomes unresponsive. Worse yet, her phone isn’t offering an accurate read on her location, so Maddie starts calling her family members to trace the woman’s steps — only to discover that woman is pregnant! Meanwhile, Athena has pulled over a woman with a serious case of crazy eyes, blood all over her hands, and a dying hour-old infant in her backseat.

You can see where this is going, right? These two cases are connected: The crazy driver arranged to sell baby clothes to the pregnant woman, then jumped her and cut the baby out with the intention to parade the newborn around as her own. Luckily, the woman is discovered in time and both she and the baby survive the ordeal. Unfortunately, this is based on an absolutely horrific case that occurred in Chicago earlier this year that did not have a happy ending. A pregnant 19-year-old woman was strangled to death and had her infant torn from her womb by a mother-daughter duo, who then tried to pass the baby off as their own, saying the daughter had given birth at home. Facebook messages revealed that the missing teenager had met up with the duo to pick up used baby clothes, and the crime was later proven thanks to DNA tests. If you think this is just one outlandish case, try Googling “fetal abductions.” I mean, don’t actually do that because it’s too early to have your week ruined, but kidnapping infants before birth is not a new concept at all.

On that note, let’s all look forward to the Buck & Christopher Feel-Good Happytime Hour we’ve got coming next week!