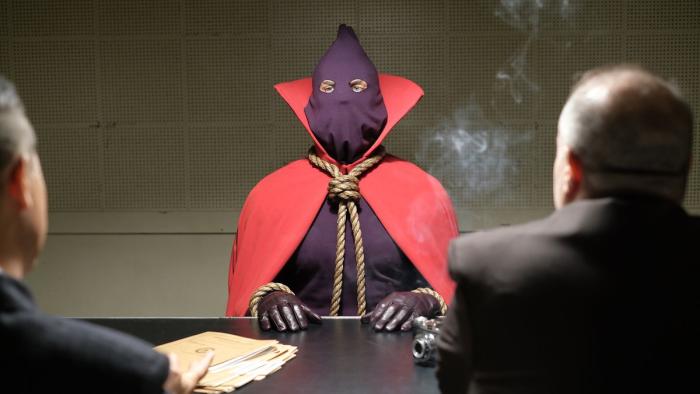 This week’s episode of HBO’s Watchmen is too big to reduce to a post on a website. There’s nothing I can write that can do justice to what Damon Lindelof and Cord Jefferson (a writer on The Good Place who co-wrote this episode) did in the span of an hour. It’s not just that they created a television masterpiece, it’s that they completely transformed the underlying context of a highly influential 30-year-old text without disturbing the text itself. It was nothing short of a staggering achievement.

In Alan Moore, Dave Gibbons, and John Higgins’ Watchmen, Hooded Justice is the first masked vigilante and the inspiration for all the masked vigilantes who came after him. He is the fuse that lit the powder keg. He is the premise upon which the rest of the comic is built. In Moore’s Watchmen, however, the identity of Hooded Justice is never conclusively revealed. Damon Lindelof and Cord Jefferson thus decided to not only reveal the identity of Hooded Justice but to explain why Will Reeves decided to put on the mask. It is remarkable how well the teeth of Lindelof’s story fits into the gears of Moore’s Watchmen, doubly so for the way it transforms the pretext for the entire masked-vigilante movement.

That the 105-year-old Will Reeves is Hooded Justice is not a huge surprise for anyone who’s been following HBO’s series closely. Speculation to that effect began to surface after the first episode. But the why of it is what makes the story so remarkable: Will Reeves became Hooded Justice because he could not fight racial injustice as a black police officer. As we see from his memories implanted into his granddaughter Angela Abar through a drug called Nostalgia, Will Reeves survives the 1905 Tulsa Massacre, marries June — the woman who was once the infant Reeves saved after the massacre — and becomes a police officer (he was sworn in by Sam Battle, the first black NYPD officer).

As a police officer, however, Will Reeves finds that he is impotent to do anything about anti-black violence and racism. Efforts to do so are only met with more racism — the white cops within the NYPD who look the other way when racial injustices are perpetrated nearly lynch Will Reeves for trying to interfere. “You keep your black nose out of white people’s business,” a racist cop tells Reeves after placing a hood over his head and hanging him by a tree, cutting him down only seconds before death.

With the noose still around his neck and the hood in his hands, Will Reeves begins to walk back home but stumbles into another act of violence perpetrated against a woman by several men. Reeves places the hood back on his head and fights off the attackers. Thus is born Hooded Justice, who realizes the only way he can make a difference is by posing as a masked vigilante (inspired by the real-life Bass Reeves), but importantly: A white one. “You ain’t gonna get justice with a badge, Will Reeves,” his wife tells him. “You’re going to get it with a hood, and if you’re going to stay a hero, townsfolk going to need to think one of their own is under it.”

Crime-fighting as Hooded Justice, however, only gets Will Reeves so far. Against his wife’s wishes, Will joins The Minutemen, a masked-vigilante group inspired by Reeves himself. “I can’t take Cyclops down on my own,” Will tells June. But Captain Metropolis, with whom Reeves has an affair, and the rest of The Minutemen are of little help when it comes to combatting racial injustices. They are no better than white cops. “This sort of thing really isn’t The Minutemen’s cup of tea,” Captain Metropolis tells Reeves. “I’m afraid you’re going to have to solve black unrest all on your own.”

That’s exactly what Will Reeves aims to do. As Hooded Justice, he breaks in and brutally murders the KKK/NYPD cell and burns down the whole Cyclops operation. The violence is too much for June, who leaves Reeves and goes back to Tulsa. Reeves quits as the Hooded Justice, and so far as we know, never returns to Tulsa again until the present day, when — using the same mesmerizing techniques Cyclops used to pit black people against each other in Harlem — Will Reeves manipulates Chief Crawford into hanging himself.

It is a helluva story, all the more so because we are seeing Will’s memories from the perspective of Angela. “She’s not going to listen,” Reeves told Lady Trieu back in episode six. “She has to experience things by herself.” That’s exactly what she does in “This Extraordinary Being”: She experiences the birth of the masked-vigilante movement, prompted by the futility of her own grandfather’s efforts to combat anti-black violence and decades of white supremacy that extend all the way to Angela’s best friend, Chief Crawford, the latest casualty in The Hooded Justice’s efforts to “solve black unrest all on your own.”

— I don’t know what it takes to officially establish canon, but as far as I am concerned, this is Hooded Justice canon for Alan Moore’s Watchmen. I read Watchmen ahead of Snyder’s film back in 2014, and I honestly didn’t think that much of it, but the way that Lindelof has extended and reinterpreted it has given me a huge amount of respect and admiration for the source material.

— Cyclops, by the way, is based on a real-life conspiracy between the NYPD and the KKK.

— It is absolutely remarkable to me how well Lindelof and Jefferson took details from Hooded Justice in Moore’s Watchmen and transformed the context of the entire character — the entire movement — without changing the comic. All it took was a change of perspective. The rope around Hooded Justice’s neck has always been there. For 30 years, most people have seen it as a hangman’s noose used by an executioner. By viewing it from a completely different perspective, Jefferson and Lindelof reinterpreted that same rope as a tool of racist violence worn by Hooded Justice as a symbol for what he is fighting against.

← Why Is It So Easy To Hate (Or Love) Amanda Palmer? | Does 'Frozen' Sequel Give Elsa A Girlfriend? The Gay Content Of 'Frozen 2' →