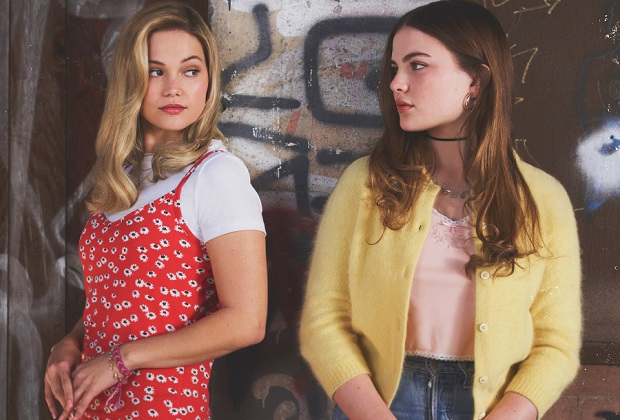 'Cruel Summer' Is 'This Is Us,' But in the Bad Place (And Also Very Fun)

Jessica Biel is the name on Cruel Summer (as a producer), but the series comes from creator Bert V. Royal, the screenwriter behind the phenomenal Emma Stone flick, Easy A, and showrunner Tia Napolitano (Grey’s Anatomy, Scandal), and that’s the sort of vibe it gives off: A high-school set Shondaland series that f**ks with time and immediately pulls in its viewers.

The high-concept premise here is that the Cruel Summer tracks on three days in the lives of Kate Wallis (Olivia Holt) and Jeanette Turner (Chiara Aurelia) in the community of Skylin, Texas during the summers of 1993, 1994, and 1995. We see, for instance, a nerdy Jeanette Turner in braces and glasses, waking up on her birthday on June 21, 1993, excited and happy, greeted by her loving parents and annoying older brother. On the same day the following year, however, Jeanette has had a She’s All That makeover — she’s made-up like a popular mean girl, and she’s being greeted in bed by her fratty but cute boyfriend who had to convince her disapproving father to let him in. On her birthday in 1995, Jeanette has transformed again. She’s surly, her hair is short, and her father is yelling at her to get up to go meet with her lawyer.

This is how the show plays with time — each episode centers on a different character over the course of those three days in 1993, 94, and 95, as it seeks to unravel the mystery of the kidnapping of a popular girl named Kate Wallis by the school’s assistant principal. Jeanette Turner, meanwhile, is somehow blamed and ostracized as “the most despised person in America” because Kate told the media, after she escaped the assistant principal’s basement, that Jeannette saw her trapped in the basement and not only didn’t alert the authorities but basically stole her life.

The first two episodes provide viewers with the outline of the events from Kate and Jeannette’s perspective, while subsequent episodes fill in the details provided by other characters involved, including Jeanette’s pre-popular friends, Vince (Allius Barnes) and Mallory (Harley Quinn Smith), the dick boyfriend with a violent streak, Jamie (Froy Gutierrez), various parents (including Kate’s mom played by the always wonderful Andrea Anders, who does a spectacularly evil Texas mom), and maybe even Martin Harris (Blake Lee), the assistant principal who we know is killed when Kate escapes.

The mysteries lie within those details, and after two episodes, there’s already a number of outstanding questions, often pertaining to why certain characters exist in 1993 but no longer seem to be around in 1994 or 1995. The way the series plays with time feels precarious, but it holds up remarkably well (so far).

The whole thing feels similar to Netflix’s 13 Reasons Why without all the problematic stuff. It is dark but immeasurably fun, like a great murder mystery that doesn’t leave you feeling squicked out. The cast is engaging, the story is riveting, and thanks to the format, it is madly addictive, like This Is Us, only everything that happens is deliciously terrible. If it were on Netflix, I’d binge it in a day, but releasing episodes weekly (after debuting with the first two episodes) will force viewers to savor it, and that’s OK, too. It has the potential to be one of those shows that gain a bigger following as the weeks go by and theories begin to surface and Reddit threads about it start to explode.

Cruel Summer airs Tuesday nights on Freeform, but it’s also available the next day on Hulu.


← What is Character Actor Denis O'Hare's Dr. Edmund Hague Doing on 'The Nevers' | 'The Falcon And The Winter Soldier' Season Finale Recap: 'One World, One People' →