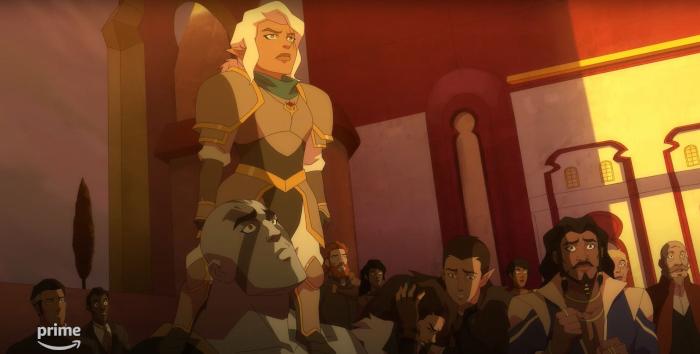 Good news for fans of table-top gaming in general and Critical Role in particular; season 2 of The Legend of Vox Machina is only a few months away. Prime Video’s first season was beloved by critics and audiences alike, sitting at a coveted 100% Fresh rating. It was a faithful and mostly successful consolidation of the campaign’s first major arc, culminating in the defeat of the vampiric Lord Briarwood and his necromancer wife before the Tal’Dorei capitol city of Emon was attacked by a flight of Ancient Dragons. At the ongoing New York Comic Con, the cast confirmed a January 2023 release date for the second season, focused on Vox Machina’s desperate attempts to defeat the Chroma Conclave, as well as a brief clip from the upcoming season.

There’s not much, but we’ve got dragons, Pike, and Grog. And honestly, that’s all we need. In other good news, the cast announced the series was picked up for a third season. The Chroma Conclave arc contains a ton of material, and that’s before they even get to the Vecna arc that ends the campaign. That’s what happens when you try to condense approximately 600 hours of storytelling into an animated format. Here’s hoping we get the whole thing before the series draws to a close. Cast regular Sam Riegel, aka halfling Scanlon Shorthalt, also provides a musical recap for season 1 that is exactly what fans have come to expect from the foul-mouthed bard, with plenty of white boy rapping and bad puns.

Tangentially related, let’s not forget that the Dungeons & Dragons fun continues with the Chris Pine\Michelle Rodriguez feature Honor Among Thieves, produced by Paramount and arriving in theaters March 3, 2023.


← Review: 'Beast' Is A Tenacious Blast of Old-School Savagery | Hilary Swank's 'Alaska Daily' Is Great Network Television and That May Be Its Downfall →