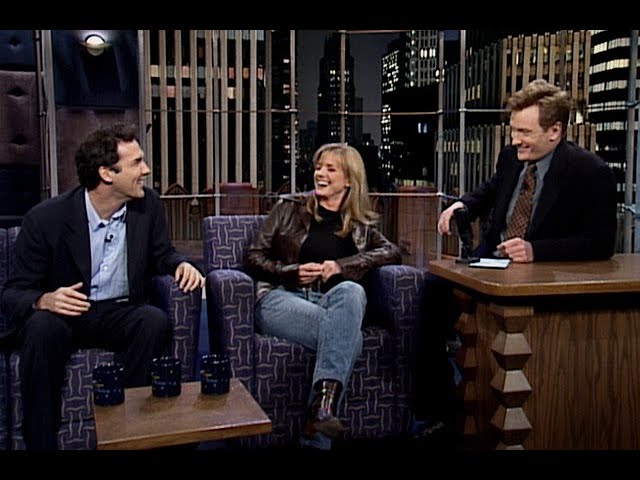 A lot of fantastic old bits and talk-show appearances have resurfaced since Norm Macdonald passed away yesterday, and if you’re like me, you may have blown off some of your movie and television obligations last night to spend an hour or two going through them all on Twitter. I hate that it takes someone dying for something like this to happen, but I have never laughed as much on Twitter in all my life. (and I maybe got choked up a few times, too — that Letterman clip ❤️). It was a wonderful celebration of a great comedian.

One of the more memorable talk-show appearances (outside of The Moth joke) was the time that Courtney Thorne-Smith appeared on Conan and Norm Macdonald gave her sh*t about starring in a movie called Chairman of the Board with Carrot Top. If you haven’t watched it yet, please do.

Never forget this Norm Macdonald appearance on Conan in 1997 — with Courtney Thorne-Smith.

Hilarious. All of it.

After this clip made the rounds on Twitter yesterday, Vanity Fair wisely tracked down Courtney Thorne-Smith to query her about it. It’s apparent from the interview, but she obviously did not have any hard feelings about it. In fact, it was quite the opposite. She described it as her favorite talk-show appearance ever.

It didn’t even occur to me that it could possibly be negative. I was beside myself.

I was there to promote Chairman of the Board. I was not thrilled about having to do it, so when Norm took over, I’m like, Oh, thank you, God and Norm Macdonald. It was a blessing. Look—had I thought that Chairman of the Board was my path to an Oscar, I might have been offended. I did not. [Laughs] So it was a joy to be teased about it. Because I didn’t know what I was going to say [on the show]. I was like, Good, Norm, you take over.

But did the studio feel the same way, to see him pummel Carrot Top and the movie?

I have no idea. It got a lot of attention, maybe more attention than it would have gotten otherwise. You know what they say: Any press is good press.

All the same, Conan did worry that Thorne-Smith might have been offended by the incident.

[Conan’s] such a nice man, and I would run into him later and he was afraid that I was offended. I told him absolutely not. You know those great nights you go out with your friends and you start laughing and you can’t stop, and you have that satiated feeling? That’s how I felt. I didn’t expect to have an amazing time, and I had an amazing time. That’s what I walked away with; just giddy with how much fun it was. I had a ball.

Clearly, she’s a good sport and, like Macdonald, did not take her role in a Carrot Top movie seriously.

I am absolutely devastated about Norm Macdonald. Norm had the most unique comedic voice I have ever encountered and he was so relentlessly and uncompromisingly funny. I will never laugh that hard again. I'm so sad for all of us today.