Aside from a few guest spots (and the new Scream movie), Courteney Cox has been largely absent from our screens since Cougar Town went off the air in 2015 (RIP to that awesome show. Penny Can!) Shining Vale — airing on Starz, where the first two episodes are currently available — marks Cox’s return to television.

In Shining Vale, Cox plays author Pat Phelps, best known for a raunchy sexcapade book she wrote a few years prior. She and her family, husband Terry (Greg Kinnear,) teen daughter Gaynor (Dickinson’s Gus Birney,) and son Jake (PEN15’s Dylan Gage) have moved from Brooklyn into an old, vacant Victorian home in the small Connecticut town of Shining Vale, hoping to put the pieces of their lives back together after Pat had an affair with their previous handyman.

Almost immediately, Cox’s character senses something off about the house (being able to snatch it up at below asking price should have been a giveaway) and starts seeing things — ghosts? Yes, and she’s played by Mira Sorvino in full on camp-mode. Pat’s husband and their marriage therapist think she needs to up the dosage on her antidepressants and her kids are too engrossed in trying to fit themselves into their new school to pay much mind. Plus, they’re all still upset with her about the handyman incident — it’s her fault they’re stuck in this little town, in this creepy house, and they’re not afraid to express their anger with the situation. 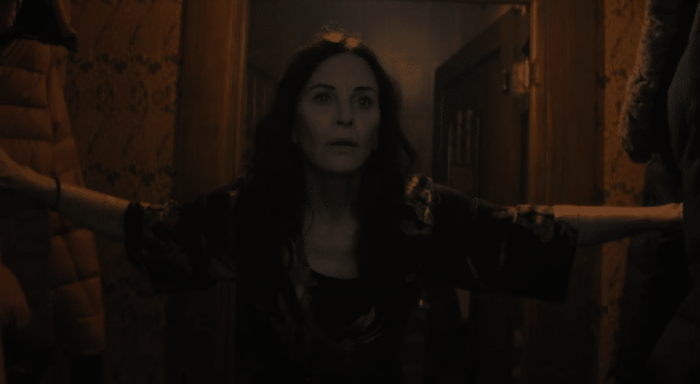 Over the course of the first two episodes, we meet a few locals to get a sense of the town. The real estate agent who helped them buy the house (Twin Peaks’ Sherilyn Fenn) is full of gossip and hangs out with the “cool moms” at the local café, where Pat is ambushed by their small town opinions of her book. (“Oh! The lady porn.”) There’s also a family of unsettling, overly religious neighbors who keep popping up unexpectedly. The son is cute and in class with Gaynor. He convinces her to join The Chastity Club even though Cox’s character makes it very obvious that horse has already been let out of the barn. The religious mom seems to mysteriously appear and disappear, clutching at her medallion. She mutters about some force she feels coming off of the house. Or maybe she’s projecting her thoughts. Something is going on there, but she’s not much for small talk so we don’t know what she’s on about yet. 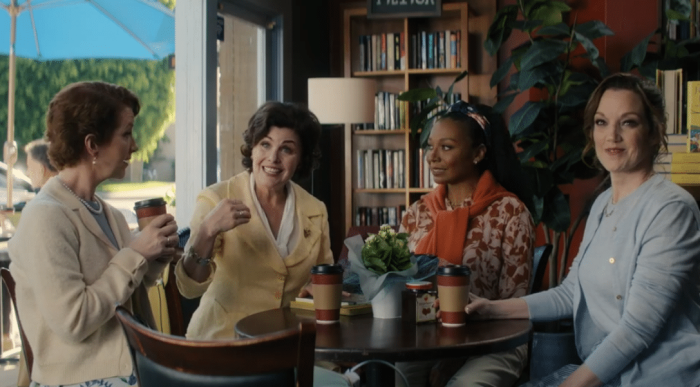 Awkward teenage son Jake has no friends outside of his Oculus headset. Everyone is convinced that his online friend is a child molester waiting to snatch him up after school. It’s a shock then when Jake invites his friend to dinner and it turns out to be another awkward teenage boy whose father, played by Parveesh Cheena (Centaurworld, Crazy Ex-Girlfriend), also assumes they were meeting up with a molester. Such a silly misunderstanding!

The humor of Shining Vale leans heavily on the same sort of biting, east coast sarcasm that Cox is comfortable with from Friends. However, the humor is way more adult than her fans from network sitcoms might expect. When your show is on a cable channel you can throw as many F-Bombs as you want in the dialogue. I love it. Courteney Cox is a talented performer when given the right material and this show feels right for her. Pat Phelps is dissatisfied and unhappy with her life. Artistically, she’s stuck and faced with the prospect of returning the advance she got for her next book because she’s been sitting on it for six years. She’s haunted by the loss of her relationship with Frank, the handyman, and the loss of her connection with her children as they grow older and more bitter. Greg Kinnear’s Terry, who is trying to maintain a sense of optimism with forced smiles and fake enthusiasm, is an excellent foil for her. They have good on-screen chemistry as a couple struggling with Pat’s past infidelity and alcoholism. He does not trust her, nor does he believe in her, but he seems to be trying. When Pat starts hearing strange noises and seeing inexplicable things in the house, it’s easy for him to brush it all off as she becomes more and more insistent that something is wrong. 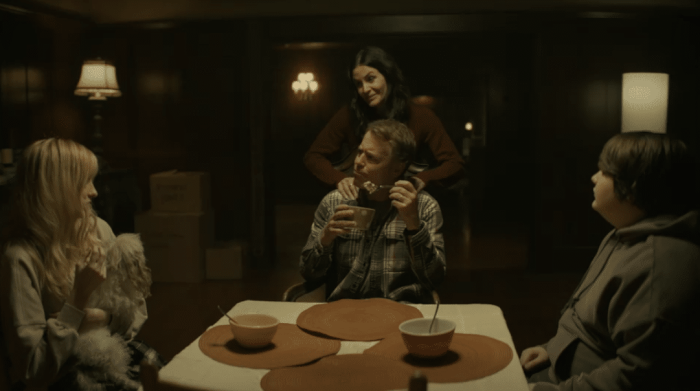 You don’t get a lot of good haunted house shows for grown-ups. SyFy always has something like Surreal Estate on deck, but there’s not a lot of real edge to those shows. This seems like it’s going to be darkly funny while it tackles the mystery of the home’s ghosts and more personal mental health issues for Cox’s character. There are also a lot of little touches that pay homage to The Shining I thought were nice, too. Aside from the idea of a writer struggling with their past misdeeds and a possible descent into madness, there are title cards that have the day on them to indicate the passage of time, and the dissonance of Pat’s normal wife/mom behavior and her growing sense of isolation as sh*t around the house just gets weirder and weirder. I think it will be worth a watch.

New episodes of Shining Vale are available on Starz and for streaming on Sundays.


← Stromae Gives Us The First Masterpiece Of the Pandemic With 'Multitude' | Bullet Points: Pete Davidson to Play Pete Davidson, While André Braugher Lands the Perfect Gig →