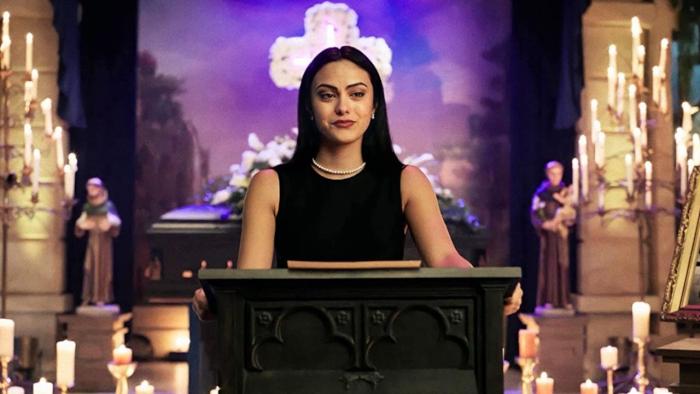 Conspiracy: After Six Seasons of 'Riverdale,' Do All the Actors Hate Each Other?

This may be the one time in the history of Riverdale where the events of an episode feel muted compared to the reality around us today. Nah: This show is still flat-out nonsense.

Recall in last week’s episode that Nona-Rose transported the soul of the Blossom ancestor, Abigail, into the body of Cheryl Blossom, who is apparently now in the ether. Nona Rose is hopeful that Abigail can reclaim Riverdale for the Blossoms, but there are two issues. First, the family of the newly introduced antagonist, Percival Pickens, has a history with the Blossom family, and it did not end well; and second, Abigail is in love with Cheryl’s ex, Toni, who looks like Abigail’s lover from her time (and Toni’s own ancestor). Abigail, however, is disturbed to learn that Toni is now with Fangs, whose own ancestor murdered Toni’s ancestor. Meanwhile, when Nona-Rose calls Toni “serpent’s trash,” Abigail locks Nona-Rose away.

Elsewhere, Veronica is dealing with the blowback of having her father assassinated (he was shot four times in the back and buried in a shallow grave, so there’s no doubt that he’s gone). Veronica had to hold a funeral and give the eulogy for her father, but first, Hermione Lodge made a return for the memorial. (Marisol Nichols has left the show, but returned for this episode). Hermione has a film crew following her around because she’s taping a Real Housewives type show. Veronica confesses to Hermione off-camera (presumably) that she ordered the hit. Soon thereafter, the assassin who killed Hiram comes after Veronica, but the bodyguard of Hiram’s mother kills the assassin before the assassin can kill Veronica. We don’t know who put out the hit on Veronica, but I’m low key betting it was Hermione, even if she did hate Hiram. During the eulogy, Veronica apologized to Riverdale for all the horrible things that Hiram has done, but also confessed that she couldn’t help but still love her father.

Kevin — remember him? — he’s gonna stay in Riverdale and become a deputy to his father, the sheriff.

Jughead is still coming to terms with the fact that he’s deaf, although he’s not going to learn ASL because he’s been told that in six months he’ll have an implant that will allow him to recover his hearing. In the meantime, Jughead develops his own superpowers: Without his hearing, he’s become a master graphic novelist and, oh yeah: He has psychic powers. He can read minds.

Betty’s superpowers come with a headache, she learns. The Trash Bag Killer is sending Betty’s former FBI partner, Glen, to Betty piece by piece. We also learn that Palladium is Archie’s kryptonite. Dennis — a construction worker working on rebuilding Archie’s house — uses Palladium to knock Archie out because, as it turns out, Dennis is apparently the TBK killer. He abducts Archie and is about to kill him, but Archie’s dog, Bingo, saves Archie (recall that Bingo the dog also has superpowers). However, TBK manages to escape. Betty has decided to leave Riverdale for a while to lure TBK away from Archie, since TBK knows Archie’s superhero weakness is Palladium.

Finally, for Ursula Majorette and our other conspiracy theorists: The five main characters continue to share very little screen time together, as has been the case for a while. They’re largely siloed into their own individual storylines. Neither Cheryl nor Veronica shared any screentime with the other main cast members; Archie and Betty had scenes only with each other, except for one short scene that Archie shared with Jughead, who otherwise did not spend time with the rest of the main cast. It’s also worth noting that none of the other main cast members were present for the funeral of Hiram, where their supposed best friend, Veronica, gave the eulogy. Kevin, meanwhile, rarely shares screentime with anyone.


← John Oliver Pushes For America To Embrace Harm Reduction Centers For Drug Addicts | After All That, 'The Goldbergs' Is Poised for a 10th Season Renewal →