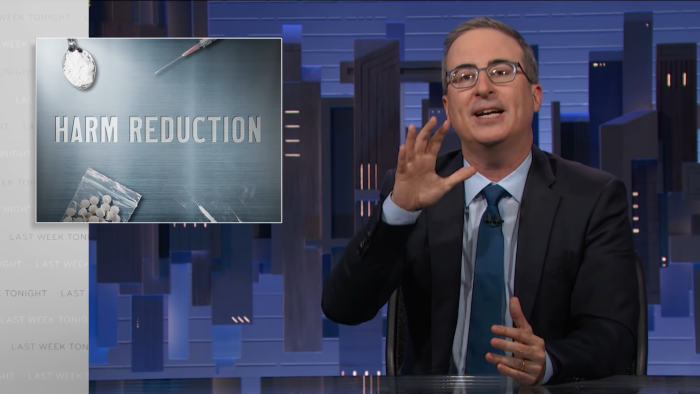 You’re lucky if you don’t know anyone who has been negatively affected by drug addiction. Dependency on illegal narcotics can upend homes, divide families, and result in death. Unfortunately, in the United States of America, people have been told that the only way to avoid these circumstances is to just not do drugs. America has pushed abstinence and punishment instead of help and understanding, and surprise, the effects have been less than helpful.

On the newest episode of Last Week Tonight, John Oliver pushed an alternative method to demonization. The eponymous host highlighted the need for Harm Reduction centers. They are facilities where people who already use drugs can do so without fear of contracting a disease or worse, overdose deaths. It is a concept that accepts the fact that people are people. Some of those people will become addicted to drugs, and they shouldn’t be cast aside like pariahs or shoved into a prison system that does not care about their rehabilitation.

Some people push back on this idea. Certain kinds of people (I don’t have to say who, do I?) insist that this is a moral failing, that we are just encouraging drug use. They ignore the fact that these facilities work. They cling to the old ways of abstinence and nonsensical PSAs. The problem is that decades of those PSAs have warped public opinion. It’s not just right-wing politicians (dammit, I said it) who want to live in a magic land where no one does drugs and those who do are left to rot in for-profit prisons.

Harm Reduction centers work. Not only do they reduce the risk of overdose by one hundred percent, but they also push a mentality that our country consistently fails to embrace: empathy. People who are suffering should not be run out of town. They could be your brother, sister, mother, or father so why not treat them as such? Why not offer them a chance to remain safe and possibly get clean? It may not be easy, but it’s better than the alternative.


← What the Hell Just Happened at the Oscars? | Conspiracy: After Six Seasons of 'Riverdale,' Do All the Actors Hate Each Other? →