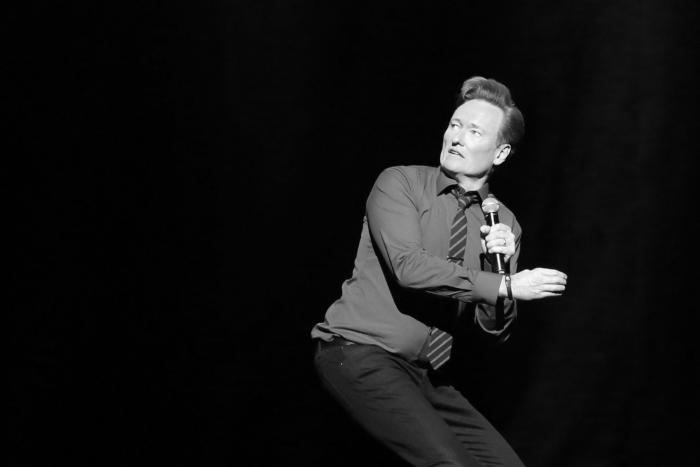 Conan Wants You To Yell Regis’s Name During Sex

We’ve all been there. Things with your partner are gettin’ all hot and heavy. It’s been about 12 minutes and 38 seconds so everybody’s ready to wrap things up. You have to end on a high note! You have to make sure that this encounter is even better than the last! So you search your soul for a magic word. A word that will encapsulate all the sexiness that has been going on. Well, why not invoke the name and spirit of longtime talk-show host and all-around nice guy Regis Philbin?!

That’s what Conan O’Brien suggested in the latest episode of his podcast, Conan O’Brien Needs A Friend. After an interview with Sean Penn that took a… strange turn, Conan chatted with his Assistant Sona Movsesian and his Producer Matt Gourley about dating profiles. Specifically, a fan sent in an exchange from an app where he told a woman it wouldn’t work because she hasn’t kept up with Conan. O’Brien, somewhat surprisingly, did not approve of this method.

So, when is it appropriate to mention O’Brien to your lover? Mayhap while you are reaching a “critical moment” as Conan calls it? Nope! Still not the time. I guess just don’t mention Conan at all. Per his wishes. But there has to be other talk-show hosts whose names you can call out whilst you kick the beam! Not Fallon, or Colbert, or Ferguson. No! You must exclaim “Regis!”

Let’s be honest with ourselves. Some brave soul out there will try this, next time they blow their lump. Perhaps they’re trying to ease the tension, or prove just how hilarious they are. Maybe they, like the online dater whose message was read, also want to ensure that the person they’re dating is truly a Conan fan. This would be the ultimate test. If it works?? I hear wedding bells, baabyyy!

If you are that brave soul, all I ask is that you let us know. I don’t need proof. Don’t send me videos or sound clips. Just let me know, be it by carrier pigeon (which is what I call Twitter) or in the comments section, that when you next cleave the pin, you yelled Regis. Heck, just share a gif of Regis. A picture even. Then I’ll know. Then we’ll all know!!