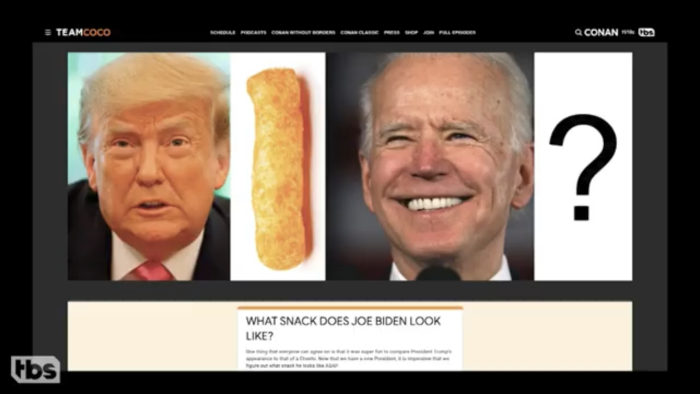 Welp, time for me to get Rudy Giuliani back on retainer! Last week I discussed here that Conan O’Brien was asking a very important question about Joe Biden: what kind of snack food should we, as a country, refer to him as? Of the choices, I was firmly #TeamSaltine. ALLEGEDLY, this was not the option that people voted for.

Japanese Shrimp Chip ALLEGEDLY won with over 1,300 votes. “And this is not a contested election,” O’Brien said, like a man whom someone clearly has dirt on. What are you hiding, Conan?!

Here’s why this just doesn’t add up. First, I think it’s important to note that I don’t think Andy Richter was allowed in the room when the votes were being counted. STRIKE ONE. Next, I’ve been saying since the contest’s inception that online votes weren’t secure. Yet, all the votes were made online! STRIKE TWO. Finally, it just doesn’t make sense that this country would vote for a shrimp chip. Does that make sense to you?? Didn’t think so! STRIKE THREE!

I’ve already got the ball rolling on the recount process and my lawyer will be holding a press conference tomorrow at the Waldorf Astoria Cab Consortium. BIG evidence coming, I can tell you that!
(Anyone with any evidence of online voter fraud please contact me as soon as possible)

← No Take Backs, Wayne County, Michigan | How Do We Feel About The Dunkin' Fashion Line? →