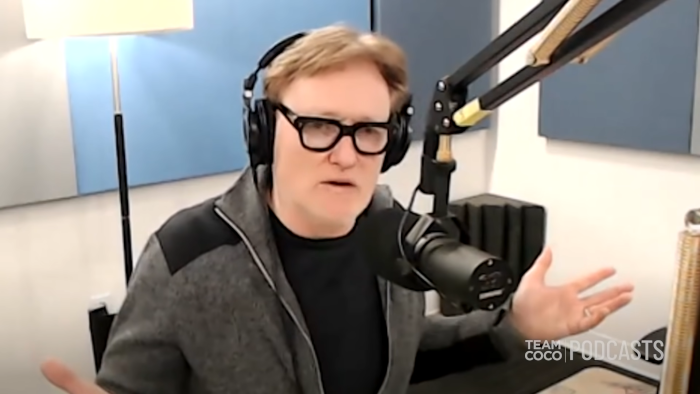 Conan O'Brien Imagines A Hilarious Death For Himself

I’ve thought about my death. How it happens has changed over the years. For a while, I was confident it would be in my 90s. As a younger man, I thought I was pretty invincible. When I hit 30, I became convinced that I could drop dead at any moment. A friend of a friend had died unexpectedly at 32. Indeed, if I didn’t start taking care of myself, I would be next. Then, I became a father. Now I do everything in my power to avoid thoughts of dying young. All this to say, Conan O’Brien has much more fun imagining his death.

In a recent clip from his podcast, Conan discusses death announcements with his cohosts Sona Movsesian and Matt Gourley. At first, he laments people wondering how someone in their 90s could have died. To Conan, the answer is obvious. They were in their 90s. This leads Conan to reveal that if he dies at 95 he wants no reason given unless it is an absurd one.

What happens next is Conan riffing on his death for a solid two and a half minutes. It is gruesome, hilarious, and pure uncut Conan. One of the best things about Conan’s podcast is the opportunity for him to improv. He seems to relish the chance. It makes sense, given that he spent almost 30 years having to read from cue cards. Now, if Conan gets a chance to riff, he riffs hard.

While his horrid death description is hilarious, there’s a moment that made me laugh even harder. Early on, when Conan accuses Sona of planning his death, she readily agrees. It is the most nonchalant acknowledgment I have ever seen and just another example of Sona and Conan being an excellent team.

← 'Moon Knight', 'We Own This City', 'Barry', And More On Podjiba! | Sen. Josh Hawley Knows He Can't Strip Disney of Its Copyrights, But That's Not the Point →