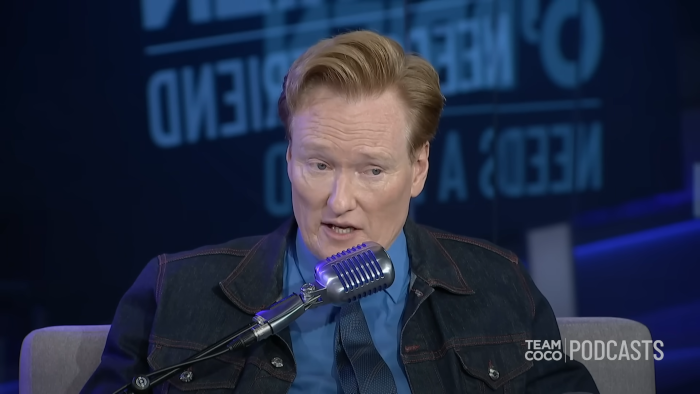 I started this article trying to remember if I have ever been to a show or concert without knowing the person or people putting on the show or concert. I was hard-pressed to find an example. I’ve seen opening acts I wasn’t familiar with. There have been Broadway shows I have seen for the first time on stage, but even then I had some vested interest. Never have I found myself in the position that an audience member for Conan O’Brien Needs A Friend found themself in.

Recently Conan and his crew sat down at the Sirius XM headquarters in LA to record an episode of his podcast. While the usual hijinx ensued, Conan was more interested in an audience member who claimed to have never listened to the podcast before. Now, Conan is a big-time celebrity. There’s a chance that the audience member in question just wanted to see his favorite former Simpsons writer.

But I have another theory.

Years ago I attended a free event at a recording space that featured Rob Heubel and Paul Scheer. They were there promoting their new show for the shortlived Verizon app go90. I’m a big How Did This Get Made fan and wore an HDTGM shirt like a rube (it was the What’s Its Mission shirt for the HDTGM savvy). Paul seemed to like it, because when it was time to call for questions he tried to pick me. Twice. However, a moderator with microphones quickly handed the mic to several planted audience members who were specifically asking questions about the duo’s new show.

It was a perfect example of a company running a show as opposed to the people involved in the show. It makes sense. Planting audience members for questions or even just reactions is a great way to ensure the show doesn’t run long or you don’t get any wacky questions. My guess is that Conan found himself in a similar situation without realizing it. Sirius wanted to ensure the show went well and threw in a couple of plants to yuck it up. They didn’t expect the plant to get called out, but in their defense (if my theory proves true), it resulted in a pretty stellar moment in the show.

← Trailer Watch: Spirited Santa Clauses Go Bumper in the Ragnarok | What the Hell is Going On at the CW Network? →