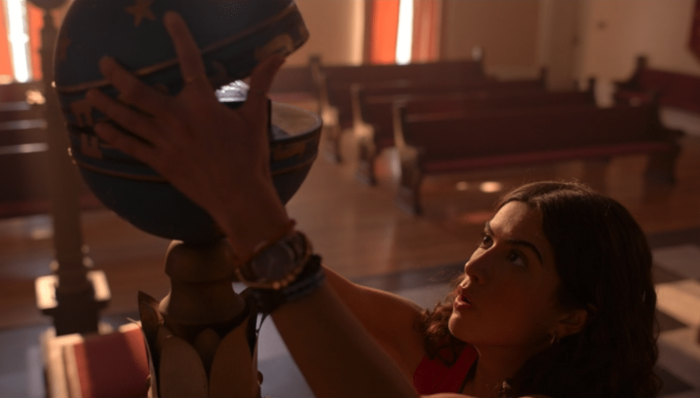 Can A Cage-less, Disney-fied 'National Treasure' TV Series Even Work?

When it comes to rebooting existing IP, less is more. Specifically: The less beloved something is, the more runway you have to do something new and interesting with it. In that respect, National Treasure is a prime candidate for a makeover. The original 2004 movie, produced by Jerry Bruckheimer and directed by Jon Turteltaub, was a critical nothingburger that still managed to find a sizable audience receptive to an action/adventure that didn’t take itself too seriously. There was history and mystery and danger, but mostly there was Nicolas Cage stealing the Declaration of Independence. Turns out that’s a potent enough combination to earn a greenlight for an unplanned sequel (2007’s National Treasure: Book of Secrets) where Cage has to kidnap the President of the United States, and … well, that’s when the steam ran out of the franchise for about a decade. A script for a third installment has been in the works for ages, though it has finally gained traction in the past couple of years (much as Cage’s own career has gained traction after hits like Pig and The Unbearable Weight of Massive Talent), and in the meantime, there’s National Treasure: Edge of History to tide us over, which premiered on Disney+ with two episodes on December 14th.

Edge of History is part spinoff, part sequel, and exists in the precise triangulated midpoint between the National Treasure movies, the early-aughts Disney Channel heyday, and an American culture that views its history more and more through the lenses of colonialism and oppression. If that sounds like a lot to juggle, it is — but the result is savvier than I expected.

The show brings back Harvey Keitel as the now former FBI agent Peter Sadusky in the first episode, to introduce our central mystery (Montezuma’s missing treasure, hidden by a secret network of indigenous women to keep it from Cortés and the conquistadors!), and future episodes will feature Justin Bartha’s return as Riley Poole. If the show does well, there’s been talk that Nicolas Cage himself may be on deck to reprise his role as Benjamin Franklin Gates in a second season. All of that may help situate the show in the same universe as the rest of the franchise, but so far it doesn’t pull focus from the new cast of characters. Jess (Lisette Olivera) is a young Mexican immigrant living and working in Baton Rouge thanks to DACA, but the threat of deportation and the question of citizenship looms over her future. She aspires to join the FBI as a code cracker, and it’s her puzzle-solving skills that help her track down Peter Sadusky, who then sets her on the path of becoming a treasure hunter. Helping her along the way are her friends Tasha (Zuri Reed), Oren (Antonio Cipriano), Ethan (Jordan Rodrigues), and even Peter’s estranged grandson Liam (Jake Austin Walker), and though their skills range from country music singer-songwriter to YouTuber at least they seem loyal. Their mission: Track down three puzzle box relics that together will provide the location of Montezuma’s stash — and Jess just so happens to find the first box in Sadusky’s Freemason Lodge.

Of course, no National Treasure installment is complete without an adversary competing for the prize, and Edge of History landed a great one when they hired Catherine Zeta-Jones and stuck her in a blonde bob. She plays Billie, a deliciously venomous, uh, crypto trader-slash-black market antiquities dealer who has taken up the case of the missing relics on behalf of somebody. For what it’s worth, I’m enjoying this television Zeta-Jones-naissance, which includes her recent turn as Morticia in Wednesday and my personal favorite, the doctor who slept with her patient/prisoner, Michael Sheen, and then kidnapped him in the boot of her car in the second and final season of Prodigal Son (RIP). Anyway, Billie has a mean streak a mile wide and seemingly limitless financial backing, while Jess has only her brains — and by the end of the second episode, Billie becomes fully aware of just how clever Jess is when she realizes the girl figured out how to open the Aztec puzzle box in the course of a bus ride. It’s looking like Jess herself is about to become a target in this treasure hunt.

There’s one more connection to the films that’s worth mentioning because it’s a thematic one: The Family Connection. In the movies, Ben Gates was always following clues from his ancestors or trying to clear their names in his various historical pursuits, and it turns out Jess is in a similar position. Her father died when she was an infant, leaving her with only his necklace to remember him by, and though her mother hasn’t told her much about him other than that he was a lowlife thief, we see in a flashback that he was, in fact, a treasure hunter trying to protect the relic boxes. Peter Sadusky figures it out too when he recognizes the symbol on Jess’s necklace and realizes where it came from. Another twist comes at the end of the second episode, when Jess and Liam find Peter’s secret study and discover a scholarly paper about the treasure… written by Jess’s mom. One of the show’s biggest weaknesses is the way it hinges on loose coincidences to bring Jess into her Call to Adventure, but the fact that she has a personal stake in unraveling the truth is at least a tried-and-true element of the franchise.

So far, at least, Edge of History doesn’t have much action to spice up the proceedings, which may be a disappointment for fans of the films. I suppose it isn’t fair to expect it to, given budget limitations, but it does mean that the puzzle-solving elements have to do the heavy lifting to keep things exciting. In that respect, director Mira Nair, who helmed the premiere, does a wonderful job establishing a visual motif for Jess’s mental gymnastics as clues light up around her. Add to that the fact that the fresh-faced young cast seems ripped from some sort of High School Musical: The College Years ensemble, and it’s clear that while National Treasure is a family-friendly franchise, Edge of History is very much a kid’s show. That isn’t a complaint, but it is something to be aware of if you’re hoping this show will scratch your, uh, “Nic Cage Stealing The Declaration of Independence” itch. What Edge of History does well is to update the groundwork of the franchise for a new generation, and expand the boundaries of its treasure hunting by acknowledging that there is more to America than just the United States — and a lot of people who were here long before the Founding Fathers. There are still two more relics to be found, and I’m intrigued enough to keep watching — even if there’s a part of me that’s selfishly waiting to see if we’ll get hints at that long-awaited third movie before the season is through.