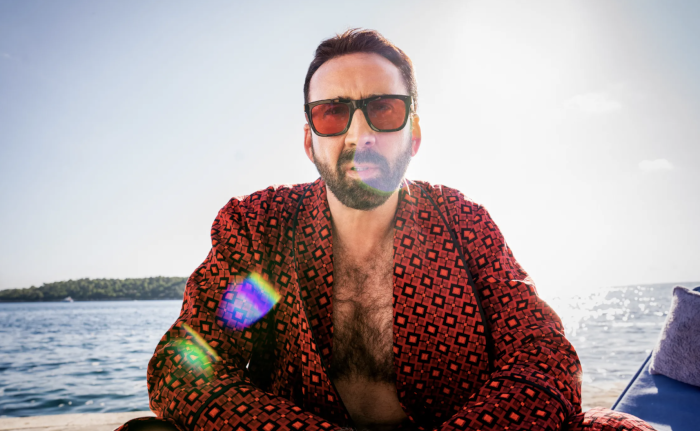 In its early days, Hollywood created its movie stars. The Marilyn Monroes, the Grace Kellys, and the Cary Grants had personas crafted from the studio system’s star-making machine. Public perceptions of these people were distorted and formed only by what Hollywood wanted you to see. This disconnect made them seem like gods in a way, not living on the same plane. But as the studio system faded, so did the machine, and the stars had to make themselves. Fame in Hollywood is easy to achieve, but not an image that’s long-lasting. Unless you’re Nicolas Motherf—king Cage.

The actor surely knows the unbearable weight of massive talent, an apt title for Tom Gormican’s latest. The director teams up with his Ghosted co-writer Kevin Etten to create a film full of meta satirical wit. Cameos by actors playing themselves are common, but not entire films. A film like The Unbearable Weight of Massive Talent hasn’t happened since Being John Malkovich, and it seems fitting to have the camera pointed at Cage this time around. Since his first screen appearance in 1981, he has earned the introduction of “the myth, the man, the legend.” His charisma has drawn audiences to him for decades. When you yell action, he’s unpredictable. He can turn to drama with intensity and comedy with absurdity. When the moment calls for emotion, he is sincere. Whether personal or onscreen, his style is singular. In Massive Talent, he is Nick Cage. This play on himself is tough, brazen, brash, and heroic, but also arrogant, obnoxious, and egotistical. Many parts of this character don’t feel like a persona at all, while others feel like misconceptions about Cage himself. As the film explains, he has made all the moves to prove he isn’t a typical movie star.

Nick Cage is looking for his next big break; that blockbuster role that will be a game-changer for his dried-up career. Many doubt his talents because he’s not “big” anymore, and his career has gotten in the way of many things, especially his relationship with his 16-year-old daughter. He regrets not being more present with his family, and his ex-wife tells him to get his shit together before the relationship between himself and his daughter is strained even further. He wants to build closeness with her, so when that big role doesn’t come, he decides it’s time to retire. He does have one last gig, however. He flies to Mallorca to make an appearance at the birthday party of a wealthy olive grower, Javi (Pedro Pascal). What seemed like a relaxing vacation, at first, turns into a “Donnie Brasco-type situation,” as Nick describes it. Javi may not be who he seems, and Nick must team up with CIA agent, Vivian (Tiffany Haddish), to uncover the truth. In the midst of his spy antics, a blockbuster Hollywood script is cooking. He’s playing the biggest role of his life.

Together, Nick and Javi form an LSD-fuelled adult drama with all the familiar trappings. Nick finds himself starring in the kind of film he wanted to be in to retain his relevance. The Unbearable Weight of Massive Talent is a high-stakes character-driven piece that has the right mix of thrills, comedy, and emotional weight. A film within a film, in a way, Cage plays the part of someone who captures his off-the-wall sense of humor, but perhaps more over the top than himself. He leans into the absurd as he talks to the devil on his shoulder, Nicky, an ’80s Cage in black leather with a punk edge (a play on what his career once was). Nick is in complete contrast to Javi, who is an awkward fanboy in his presence, but their entertaining dramatics and comedic timing bounce off each other perfectly. In simple terms, Massive Weight can be seen as a goofy buddy comedy. Just two dudes being bros, who draw the occasional gun and warrant a car chase. Not all the jokes land, but it’s what this satire is poking fun at that makes its script so impressively intelligent.

At first blush, it may seem that Cage is poking fun at himself. This isn’t true. Peel off that layer and you have an affecting narrative about a father’s love for his daughter. Peel it further, and it’s making fun of Hollywood. The film is essentially poking fun at what Hollywood thinks puts butts in theatre seats. By looking at Hollywood culture, history, and how Cage’s career is viewed, Gormican and Etten’s satirical lens creates your typical blockbuster to challenge if Cage really needs to be in a movie like that to stay relevant. The way the film plays out all the stereotypical moments in high-stakes dramas, mixed with those last kiss goodbye tearjerker elements, makes you realize how ridiculous blockbusters are at times. The actor has made many bold career choices in recent years. From films like Mandy, Colour out of Space, Pig, and Prisoners of the Ghostland, he’s playing with genres that most Hollywood stars of his magnitude don’t. He doesn’t care how big or small his films are, or if they go to VOD or on the biggest theatre screens. For a singular man like himself, it’s only fitting that his films are too. His appreciation of cinema in all its forms comes out in his work. Massive Talent, too, is at its core about the power of cinema and how it brings people together (specifically in the healing power of Paddington 2). Simultaneously poking fun at Hollywood, while showing appreciation for cinema itself, is a balance that is easy to strike for the filmmakers.

Nick Cage is out for a kind of redemption. Nicolas Cage doesn’t need it. As the film states, Hollywood only has faith in Marvel movies to put butts in seats. Cage’s name alone can do that. Just like the character he plays here, many thought Cage disappeared, that his career was dried-up. But audiences just weren’t looking. He didn’t and isn’t going anywhere.


← Kim Wexler Is No Skyler; She's the Sneaky Walter White of 'Better Call Saul' | Cry Valhalla: 'The Northman' Is Here To Whisper-Scream Us Tales Of Gore →