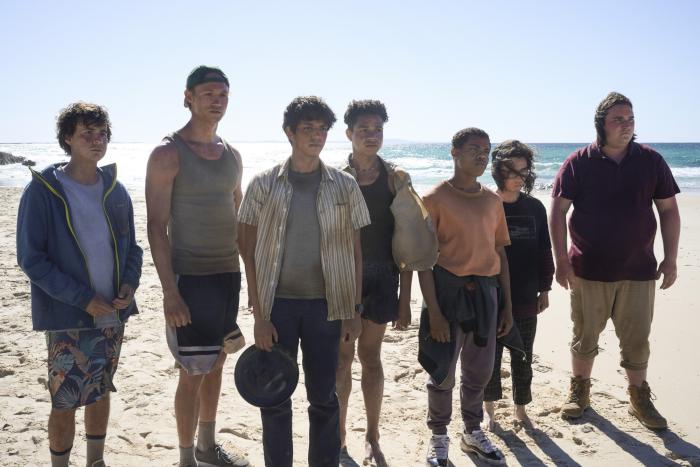 It’s been so long and the world has seemingly changed so much since that I had to look up my review of the first season of The Wilds to remind myself whether I liked it or not. I did! Quite a bit, as it turns out, although the details of that season remain hazy. After a plane crash, a group of teenage girls are left stranded on an island, and they are forced to figure their sh*t out together, à la Lord of the Flies. The twist here is that it is girls instead of boys so one might expect a different outcome. Also, unbeknownst to the deserted, the whole thing is a staged social experiment orchestrated by a corporate overlord named Gretchen Klein (Rachel Griffiths) for reasons that are unclear. It was fun, at least according to my review, in a B-movie kind of way, even if it did overly rely on the Lost-like flashbacks.

Season two introduces a twist, and that twist is the same social experiment conducted, instead, on teenage boys. What is it that all the women who write for this site like to say? Men are the worst, and true to form, the boys ruin The Wilds. The first season, which predates Yellowjackets, at least had some of that spirit, but the introduction of teenage boys drags the entire thing into the pits. It’s not just because the actions of the boys are predictable — the quiet sensitive guy is pitted against the toxic masculine guy and both are pitted against the Joe Pesci of the bunch (a guy who tries to ingratiate himself by never shutting up) — it’s that the boys also take too much time away from the female characters who we got to know in the first season. It’s like that season of The Office, where Jim transferred to the Utica office and started dating Karen Filippelli — we didn’t want to spend time with Karen and the employees at the other office, because we were already attached to the characters from the Scranton office. Bring back Pam, dammit!

The boys are the Utica office of The Wilds, only they’re there the entire season. They get most of the flashbacks to life before the plane crash, and all the girls get is a hallucination of Ben Folds, which is a welcome surprise even if it didn’t make a lot of sense (one of the girls, suffering from mental illness, hallucinates her pop idol, and with all due respect to Folds — whom I love — no one born after 2005 holds Ben Folds up as a musical icon).

In any respect, the end result is a season that is overstuffed and yet drags, as though the boys sucked all the energy out of the first season, as they do. It all eventually and mercifully comes to a head with a twist that will lead into a third season should Prime Video choose to renew the series. Alas, the third season would continue to feature the boys as often as the girls and — as the novelty of the social experiment has worn off — I see little reason to return to the island again, even to find out the mystery behind the corporate overlord’s master plan.