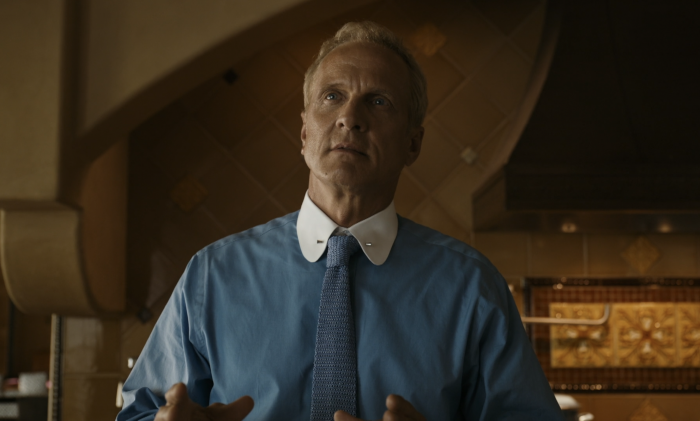 As many people can probably relate, I spend an inordinate amount of time thinking about Kim Wexler. Seeing as how the entire premise of Better Call Saul is built on having a better understanding of someone’s future by looking at their past, a glimpse into Kim’s childhood with a morally dubious mother (played by Beth Hoyt, who captures Seehorn’s vocal inflections with an accuracy that borders on unnerving) shows that her previous eagerness for legitimacy and her impressive abilities as a conwoman all originate from the same place. The young lady who scrabbled her way out of Nebraska—interesting how all roads seem to be leading either from or to that state—and into the mailroom at HHM while putting herself through law school is still the person we see today. The only difference is now, instead of toeing the line to maintain the peaceful order she craved as a child, her energy has been rerouted to obtaining her goals in faster, but more unseemingly ways, proving yet again that we’re cursed to become our parents more often than not.

The invisible noose is growing tighter around Howard’s neck, but with the exception of his check-ins with his PI, he’s too busy with his crumbling personal life to notice. Back in episode four, we learned that Howard’s marriage was under quite a bit of strain. As it turns out, Howard’s need to maintain a certain image means that he painted a far more optimistic picture of what his marital status actually is: practically nonexistent. There’s amateur taxidermy with more life than what’s left in this marriage, and it’s terribly sad watching Howard clutch at the tattered remnants of this relationship. Has a layer of foam ever held so much emotional weight to it? The presence of Cheryl (Sandrine Holt) feels like a last-minute addition to the story, especially seeing as how we haven’t been privy to anything about Howard’s personal life until now, yet there’s so much desperation in that little cinnamon peace sign that it’s impossible not to sympathize with him when Cheryl casually splashes the beverage into a tumbler. Patrick Fabian deserves an award for the way he’s able to convey shocked disappointment through that unflinchingly well kept façade. If the scam, which we now know is referred to as “D-Day,” works as Jimmy and Kim have planned it, it’s going to devastate Howard in a way that I’m unsure he can possibly come back from. I’m now almost more worried for Howard than I am for Kim at this stage in the game.

What exactly is going to transpire on D-Day is still rather opaque, though some of the pieces are starting to come together. It looks like the hapless Casimiro is going to appear to be documented in the midst of some sort of unethical activity, with the aims of blowing up the mediation process and force HHM/Cliff Main to take the settlement, but how it’s intended to work is still a mystery. We know that the mediation is happening online, thanks to the extremely hesitant Francesca making the call to HHM to secure the login details. Poor Francesca. We know the positive outlook she’s trying to maintain is as doomed as those cushioned chairs in the waiting room (with its bed and breakfast’s worth of moulding and valances), but watching her become the angry and exhausted cynic we come to know in Breaking Bad still isn’t going to be easy. The one person we can presume who manages to get out and leave this life is the veterinarian, Dr. Caldera (Joe DeRosa), who Jimmy and Kim tap for another component of their elaborate Sandpiper plot. Mysterious medication with unusual side effects aside (how this would be administered to Casimiro is anyone’s guess), we get a good idea as to how Saul obtains his many, many connections, thanks to Caldera’s little black book, including the business card of one now very recognizable vacuum repair shop. It’s all hands on deck for this scheme—does our film school crew have any idea of how far this latest caper is going to go?—though Kim is unable to attend due to an extremely important luncheon Cliff has arranged for her to go to, one that could potentially establish her dream of pro bono work for the foreseeable future.

But what is drama if not for things going unexpectedly awry? All of the careful planning in the world can’t consider every possible scenario and, in this case, Casimiro recovering from a broken arm is the last thing Jimmy or Kim could have ever possibly imagined. I admit that I find Jimmy coming across Casimiro in the liquor store to be much more convenient than what the normally impeccable show writing typically calls for, but I’ll allow it. What matters is that the obvious change to Casimiro’s appearance blows a hole right in the middle of their con, which Jimmy, having had years’ worth of experience with the concept of living to fight another day, insists they abandon. However, as Mike Ehrmantraut once observed, Kim is “made of sterner stuff.” She won’t hear of it. “It happens today,” she commands before abandoning her trajectory towards her dreams and onwards to the biggest con yet.

With almost the first half of the season behind us, and the question of “What happens to Kim?” commandeering the show’s direction—it’s abundantly clear that the creation of Saul is directly tied to Kim—her literal u-turn is going to forever symbolize the fork in the road of where her life deviated from the do-gooder officer of the court she once envisioned herself as. Over the course of the series, there’s been numerous decisions that’s led her further down this journey, most notably, her brash decision to marry Jimmy instead of break up with him, but seeing her choose the con over her pro bono dream is a watershed moment in the series.

For the third straight week in a row, Better Call Saul has continued circling around the characters’ true motivations and plans. If this was any other show, I would guess the audience would start to become weary, but as it stands, this is more about impatience for what’s to come rather than any perceived slowness. Scenes like Lalo’s terrifying attack in Germany (poor Caspar) certainly gets the blood pumping a bit, while Mike’s fragile connection to his granddaughter, whom he’s forced to interact with from afar, help to maintain some momentum, even if the plot itself only moves a few inches forward. Next week is the mid-season finale and, with it, the point of no return.

Kaleena Rivera is the TV Editor for Pajiba. When she isn’t admiring the hell out of Howard’s espresso machine, she can be found on Twitter here.


← The Most Ridiculously Posh British Actors and Musicians According to Their Wikipedia Entries | Review: Samara Weaving and Eugenio Derbez Give Us A Surprise Winner With 'The Valet' →