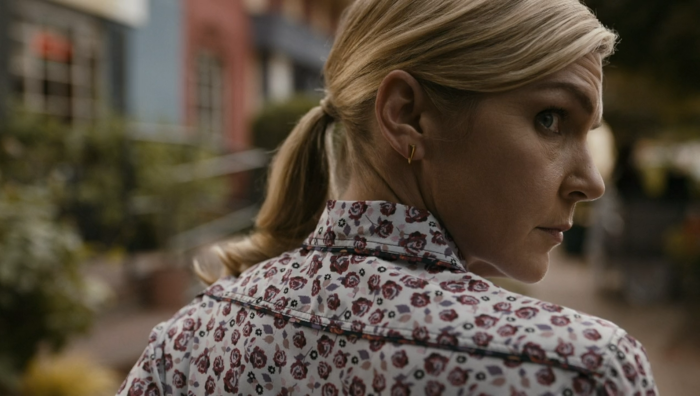 (spoilers for season 6, episode 4)
Confession: last week’s episode was so rough and left such a lasting impression that I spent the entire cold open, a scene straight out of an advertisement for suburban living, expecting the absolute worst to happen. A middle-aged couple bicycling through an idyllic neighborhood seemingly without a care, save for the garish paint job a neighbor has inflicted on their home, is the sort of good-natured banality that nearly begs for an out-of-control vehicle to come around the corner or possibly an explosion of some sort. Of course that’s a bit too heavy handed for the Better Call Saul universe. Much better to take advantage of the series’ prequel status by teasing the memory of Breaking Bad fans by displaying a familiar front door soon after the discovery that our cute couple are not what they appear to be.

Throughout the episode we see the power of subterfuge and the various aims behind it. For Howard Hamlin, it’s much more comfortable appearing to be the unflappable high-powered attorney rather than what he is, which is a man deeply shaken by the trauma and grief—it’s almost certain he’ll live the rest of his life continuing to believe that Chuck’s death was his fault—who’s just barely hanging on to a tattered semblance of inner peace, as that “NAMAST3” license plate reminds us each time we see it. That vanity plate, unfortunately, is going to have a hand in his downfall, as we watch Jimmy and Kim’s plan begin to unfurl.

Jimmy is quite literally relying on deception to hold up his end of their con on Howard. Despite the affection I feel for both Jimmy and Kim, this plan is their most terrible one yet, marking the first time a scheme of theirs is actually intended to hurt someone. When first hatching the plan, Kim absolves them by implying it will only slightly mar his reputation, enough damage that it will get them what they want (the Sandpiper money) without doing lasting harm to him. I don’t buy it. Though I have little inclination to protect people who primarily serve corporate interests, Howard doesn’t deserve this. He can be petty and is absolutely capable of being a jerk, but this sort of blow to his professional image isn’t something easily fixed, especially seeing as how much respectability is valued among his peers. All of that said, it’s hard not laughing at the hilarious shock of seeing Jimmy smothered in self-tanner and running around in his best Howard Hamlin impersonation, complete with a signature Hamlindigo blue tie. After he steals Howard’s car (thanks to Huell) during his therapy session, the gist of the day’s scheme becomes clear the moment the camera pans up from those hot pink stiletto platform heels.

Building on the first phase initiated in episode one, Kim has positioned Clifford Main (Ed Begley Jr.) at a table outside a small cafe for a meeting over coffee. The meeting is nothing more than a set up for the elaborate show Jimmy puts on, but it surprisingly turns into an opportunity for Kim to obtain valuable resources for her pro bono work. It’s an unexpected win on top of a victory, which is easily garnered by the impressive acting abilities of Wendy (Julia Minesci), yet another familiar face for Breaking Bad fans, who gets “pushed” out of Howard’s Jaguar (betrayed by that extremely memorable vanity plate) as she yells for her money in indignation. There’s only one conclusion for Clifford to arrive at, and when it fully processes in his mind, it’s all Kim can do to not smile in satisfaction.

As Jimmy drives along, sporting his best toothy Howard grin (it’s genuinely unsettling how much Jimmy nails his look), his smugness turns to displeasure when he discovers that his effort to keep Howard’s original parking spot open has failed. “What kinda assh*le moves a cone?” he yells in panicked frustration. Without any time to figure out the identity of the entitled owner of the BMW now occupying Howard’s spot, Jimmy pulls a maneuver so wacky yet inane that it feels like something pulled straight out of an episode of It’s Always Sunny in Philadelphia, pulling the “Patients Only” sign out from in front of one car and to another, the fact that it somehow works is nothing short of jaw-dropping.

It makes for a hilarious tale later that night as the couple are in bed together, but Kim is a bit concerned about a suspicious vehicle that seemed to track her from the motel where she dropped off Wendy. Jimmy thinks it’s nothing more than paranoia (“But trust me, nobody is following you.”), but Kim remains on high alert. It’s the right call because her suspicions are correct. She confronts the men in the vehicle she spots outside of the restaurant where she meets her clients but they’re not terribly forthcoming. It seems like the sort of mystery that could linger throughout the season, but the show bucks expectations by providing an answer soon enough: it’s none other than Mike Ehrmantraut keeping an eye out on them on the off-chance that Lalo makes an appearance. Kim quickly figures out that Mike was the man who helped Jimmy survive that hellish ordeal in the desert, but is confused as to why he would contact her as opposed to Jimmy. “Because I think you’re made of sterner stuff,” he rightly answers. Kim’s always been the tougher of the two (even before entering her own breaking bad phase), and she continues to demonstrate as such by withholding the terrifying information that Lalo’s still alive from Jimmy, even when he shows her the office he’s considering leasing, the very site where someday he’ll make the fateful acquaintance of one Walter White.

This episode is mostly set up for what’s coming in the not too distant future. Jimmy’s descent into full-blown Saul is beginning to intensify, both in the rapid expansion of his clientele and the negative perception of everyone in the courthouse. Though it’s not terribly surprising that people would be upset over Jimmy getting Lalo freed out on his $7 million bail, it’s still not easy seeing him be outright ostracized. I fear that this will only hasten the inevitable because as tough as Jimmy tries to act, he does enjoy being liked. With even fewer people willing to be in his sphere (that aren’t steeped in the criminal element), Kim is the only tether for his emotional life, and as we see when they walk away from the strip mall that houses his soon-to-be-office, she’s busy looking over her shoulder for potential threats.

Kaleena Rivera is the TV Editor for Pajiba. When she isn’t admiring Gus’ very snazzy laundry room/secret tunnel set up, she can be found on Twitter here.


← Does the Dog Die in 'The Baby'? | Netflix Investors Are Suing the Streaming Service for Fraud Now →