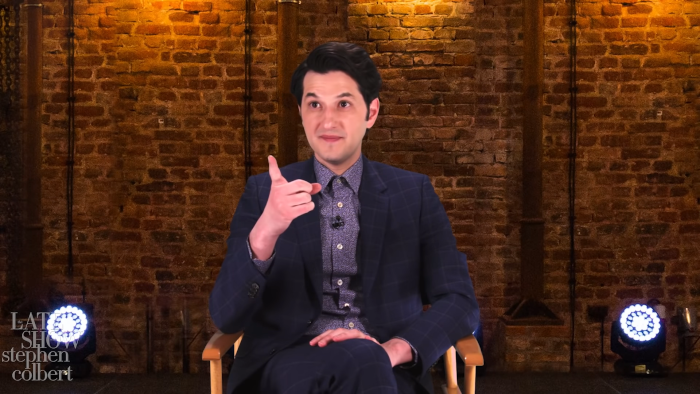 Ben Schwartz stopped by The Late Show with Stephen Colbert! He was there to answer a question that’s been on everyone’s mind. No, not, “Why is your touring show called Ben Schwartz and Friends instead of the old title?” They asked Ben what his favorite movie was. The answer: Back To The Future!

As someone of a certain age, it was great to hear Schwartz gush about Back to the Future. It’s getting to a point where I meet more and more people that haven’t seen certain older movies. That’s fine, of course. There are so many movies. It would be impossible to see them all! I grew up in a time when certain movies surrounded you. You didn’t have a choice in whether or not you wanted to avoid them. Their home release was hyped beyond all reason. They were being played ad nauseam on whatever TV channels you may have had access to.

I’m not saying that no one talks about Back To The Future anymore. Cultural conversations around movies have changed and evolved. I am saying that, on occasion, I feel like Michael Scott when he asks a woman he’s meeting about the movie, and she responds by asking how old he is.

There’s also a moment in this vid when Schwartz pitches himself as a Young Doc Brown in a Back to the Future prequel. It may be the first time I’ve found myself interested in exploring that world again. My only condition is that it explains why Doc is so fond of this young boy to whom he is not related and whose family he seemingly does not know. Maybe that’s what the secret David Lynch movie premiering at Cannes is! Until I find out otherwise, that’s what I’m going with. It’s Schroedinger’s Back To The Future Prequel.