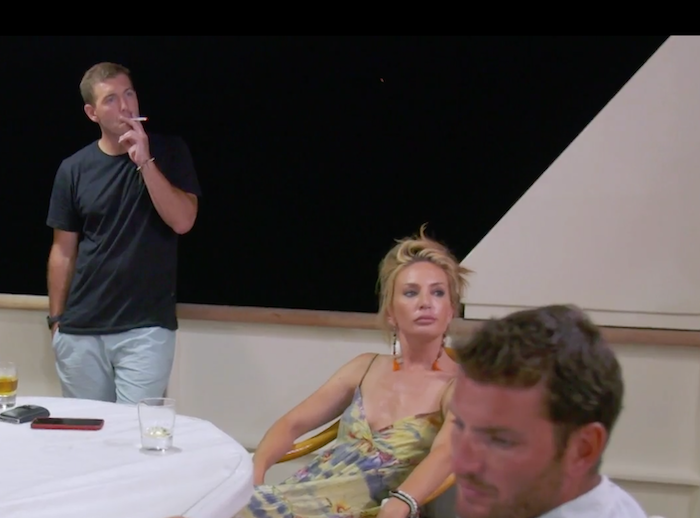 ‘Below Deck’ Ashton and His Brus are Trash, Continue to Harass Kate and Rhylee

What in the ever-loving f*ck is going on with the trash brus of Below Deck? The shit-stains of the show really upped their garbage monster game to “11” this ep and did their best to let Rhylee, who they have forgotten is saving their ass right now by coming on as a last minute replacement, know something very important when she tried her eat her dinner with the crew in peace:

That was probably the least gross thing they did, too. Their behavior this season, and in particular this past episode, is abusive, cruel and hard to watch, and I’m sure harder to experience first-hand like the women of the crew had to do. It’s not surprising, though—in fact, I think it’s a gift that this f*ckery was captured for all the world to see because while it is disgusting, it’s hardly out of the ordinary for women in the workplace. This is standard bullshit that women have had to deal with since we dared to leave our homes and try to make money for ourselves—the insular boys club, the entitlement to time and bodily autonomy, the nasty comments, the reduction to being a receptacle, the double standard of behavior. What I find particularly interesting is that the brus really do think that they’re the heroes of their own story. That their behavior is not only acceptable but should be applauded—and applaud it they do. LOL. How’s that working out for you now, fellas?

This is what happens when a raging misogynist like TrAshton gets a little bit of power but has no concept of responsibility or basic decency. He is their gleeful ringleader, and the rest of the chuckle-f*cks would never have the brass ovaries to be as overtly misogynistic and disrespectful as they are if he wasn’t leading by example. There is no way in hell that he would tolerate Rhylee sleeping in and being late for her shift as much as Tanner does. He’d be bitching to the Captain that she had to go once more. TrAshton would have made room for anyone else in his team to eat their meal at the table. In fact, a real leader would have gotten up and given her their spot, because a manager makes sure their team is taken care of. Ashton isn’t a manager though, he’s a punk. A punk that had no idea how this season was going to pan out for him because he clearly doesn’t see much of a problem with his behavior.

No, our Bosun Ashton likes to ask his brus whether they “slapped her with your dick” after they had a run-in with Rhylee. Or if they’re gonna “give her a good f*cking” when speaking about Kate, a superior member of the crew that f*ckboi Tanner thought he could act like himself around and still get laid. Which, LOL. Tanner, my boy, if you want to continue having sex, your best bet is to figure out what you would normally do in a situation, then do the opposite of it, because you are the worst and your appearance on Below Deck has done you no favors.

The women in this episode have rightly had enough—like the viewers. Rhylee loses her shit at the brus on a night out, and I don’t blame her. If I were on that boat, I’d have lost my shit by this point, too. Kate pulls rank and forbids Kevin from walking through her interior because he had just gotten done talking shit about her as she walked by, and friends? I clapped. Kate, in particular, is a sleeping lion that has finally been yapped awake by the pack of chihuahuas, aka, the brus that have been barking at her all season. Her retribution is swift, specific, and appropriate. F*ck yes, Kate. Let’s not forget she called the brus out for their gaslighting, to their face, in front of the rest of the women in the crew. She was, of course, called a bitch by the brus in their van ride back to the yacht because didn’t you know, every time a woman is called a bitch, a bru gets a tribal band tattoo. (Notice how Ashton is no longer allowed to be in the van with Kate? Maybe it’s because he’s a violent f*ck who should have been fired….)

The problem with the brus is that they are dumb and mean, which is the worst combo to be. You can be one, or you can be the other—but if you’re both? Yikes.

Other than the dumpster fire of the brus being massive pieces of shit, what else happened this ep?

Kate confirmed my suspicions that she was really pursuing Kevin out of a desire to big dog Simone because Kate strikes me as a someone who will help you rise to the occasion for your job, but if you do said job poorly in her opinion and bitch about your work, she’s going to write you off and seek out a way to put you in your place for wasting her time. I think Simone would do well with someone like Amy from season 2 as her boss, but Kate is a bad fit for her.

Kate also pulled off an Independence Day themed-party, which was pretty impressive being in the middle of the ocean in Thailand. Love that woman’s competency.

The charter guests were pleasant, and I vaguely recall Alexis on Real Housewives of Orange County but I haven’t watched that show in years so my only impression is that they weren’t jackasses on the yacht. Also, Alexis—your boyfriend does not want to marry you, lady.

If Kevin spent half the time he spends bitching and trying to undermine Kate on planning and executing his food, he might be a good yacht chef. As it stands, his food always makes me question whether he’s washed his hands enough. This episode was no exception.

Rhylee spent her time trying not to lose her shit, to varying degrees of success, and seeing where the crew could be more efficient with their time and getting ignored. Poor Rhylee.

Finally, I do believe Captain Lee had no idea the bru’s f*ckery was going on during the season. It tends to rear its head off-charter and everything we’ve been shown demonstrates that the women didn’t go to him about the brus. Additionally, a lot of their f*ckery happens amongst themselves and not in front of the women—although forcibly kissing Kate, and losing one’s shit, violently, in the van back to the yacht should have gotten Ashton immediately fired from the yacht and the show. I don’t expect to ever see TrAshton, Kevin, Tanner, or Brian on this show again after the reunion—if they even have the guts to show up for that. They’re weak cowards, and I will not miss them at all.

I am, however, looking forward to next week’s episode because I very much enjoy Jemele Hill and am also looking forward to this shit show of a season being over. This is not the fun, relaxing competency-porn show I signed up for but that’s what happens when you allow garbage people on your boat. I’d rather sit through another season of Rocky singing to herself, putting on obnoxious voices, and diving off the yacht than ever see the brus’ faces again.