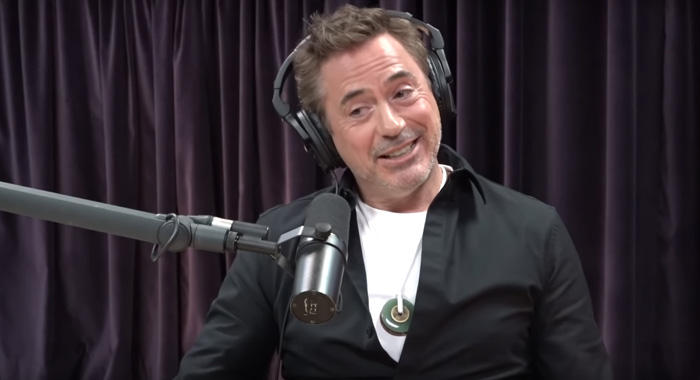 While visiting The Joe Rogan Experience, Robert Downey Jr. addressed the controversy surrounding his use of blackface in the 2008 hit Tropic Thunder and boasted that 90% of his black friends loved it. I don’t know about you, but my anus instantly puckered because there’s no way that conversation can go well, and yet, it surprisingly did. To his credit, Downey navigated the minefield of a situation mostly delicately while Joe Rogan said Joe Rogan things like it’s weird that we can’t say “retard” in movies anymore. It’s worth a watch just to — I am so sorry — marvel at the fact that Downey’s career didn’t instantly go down in flames.

Here’s the thing, while Rogan is a curious guy with a knack for interviews, he’s also about as big of a white bro libertarian stereotype as it gets. He backed Ron Paul in 2012, Gary Johnson in 2016, and… Tulsi Gabbard for 2020? What the fu— Bernie for 2020. (Maybe steer clear of Twitter forever? Just a thought.) Anyway, when Downey dropped by the show to ostensibly shoot the shit on “cancel culture” or “outrage,” it got me thinking about the old internet rumor that he’s secretly a Republican, which all started with the following quote from a 2008 NYT interview with the late David Carr:

“I have a really interesting political point of view, and it’s not always something I say too loud at dinner tables here, but you can’t go from a $2,000-a-night suite at La Mirage to a penitentiary and really understand it and come out a liberal. You can’t. I wouldn’t wish that experience on anyone else, but it was very, very, very educational for me and has informed my proclivities and politics ever since.”

If your reaction to that quote is what the hell does that even mean, you’re not alone. That was the overwhelming consensus when I dropped it in the Pajiba Slack earlier today because it is an odd collection of words. Yet that statement pretty heavily suggests that Downey’s time in prison made him more conservative than the typical Hollywood celeb. However, the theory that he’s a closet Republican didn’t fully pick up steam until 2011 when cantankerous film blogger Jeff Wells published an anonymous source who accused RDJ of being an anti-tax, wealthy elite thanks to the influence of one Melford Gibson. (OK, that’s not his full name. But it should be!) Via Hollywood Elsewhere:

“His values are pure Republican values.” the guy says. “He’s a serious materialist. He loves the great clothes, the beautiful house, the cool cars. He’s a ‘protect the rich’ guy. Why should the rich have to pay for this or that? The people who have it should keep it, and the people who don’t have it shouldn’t complain. And the one he looks up to the most and has been his philosophical guide is Mel Gibson. The Gibson thing is key. Mel Gibson over the years, and who he is and that way of looking at the world.”

As Roger Friedman reported in 2003, Downey was able to return to movies only after Gibson, who’d been a close friend to Downey since they starred together in Air America (‘90), paid Downey’s insurance bond for his appearance in The Singing Detective (‘03).

“Downey has looked up to Gibson as an older brother and authority figure and mentor for a long time…Mel said this, Mel said that…all through the ’90s and the aughts,” the guy says. “They shared [the late] Ed Limato as an agent. I ask you, how can you be that close to Mel Gibson for 20 years and not share some of his values? Of all the people Downey was close to Mel was by far the most politically inclined and vocal … he was a kind of guru.”

From there, it was off to the races. Republican sites immediately started claiming Iron Man as one of their own by using his old NYT quote and Wells’ anonymous source to assert that RDJ backed right-wing “tough on crime” solutions to drug abuse and a laundry list of GOP policies. To this day, if you Google “Robert Downey Jr. Republican,” you’ll still find his name on numerous lists of Hollywood conservatives. But here’s the crazy part, the internet might not have all its facts straight, and trust me, no one is more shocked than me. I read the stupid thing every day!

With a bare minimum amount of digging — that’s how I make the big bucks — it was pretty easy to find contradictory evidence that RDJ is out here wearing a tri-corner hat and plopping “Who is John Galt?” signs along the interstate. Not only does he sit on the board of a prison reform coalition, but in 2016, he starred in a specifically anti-Trump PSA at the request of Joss Whedon.

However, it’s also worth noting that in a contentious 2015 interview (that he ultimately walked out of) Downey both dismissed and confirmed the now-infamous NYT quote about his political views before eventually settling on, “I wouldn’t say that I’m a Republican or a liberal or a Democrat.” So there’s that. Granted, he starred in an anti-Trump video, that doesn’t exactly mean that he backed Hillary Clinton. Technically, voting for Gary Johnson or — goddammit — Jill Stein is not voting for Trump, so that leaves his political stance in a kind of gray area, which is still better than being a full-blown Republican.

On the one hand, I could easily see Downey being a Joe Rogan-esque libertarian or being easily seduced by the tech bro allure of the Yang Gang. On the other hand, he’s frighteningly close to Gwyneth Paltrow, so I hope you’re all mentally prepared to see Tony Stark do the High Hopes dance for Mayor Pete. In short, Iron Man is a series of contrasts — almost like a real person.

← 'Below Deck' Ashton and His Brus are Trash, Continue to Harass Kate and Rhylee | Sometimes, Even Oprah Winfrey Steps In It →