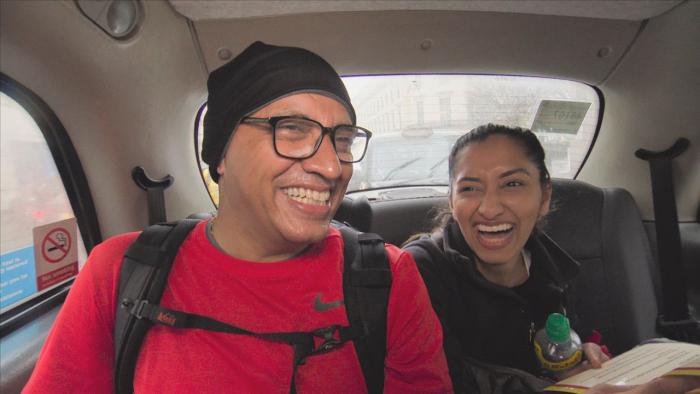 It’s been a strange and almost surreal season of The Amazing Race. After the series disappeared from CBS’s schedule for a year and a half because of the pandemic, it returned for season 33, the one that was filming when the pandemic broke out. That made for some awkward decisions. Production stopped after the third leg, and when production continued again during the fourth leg, four of the teams could not return. The brother of a member of one team had passed away; a member of another team that was dating couldn’t return because her work visa had expired (and I can’t imagine they were still dating because they seemed to hate each other after three legs); the wife in a married team was pregnant; and Anthony and Spencer — two of the passengers who stopped a gunman on a Paris-bound train traveling from Amsterdam via Brussels that would later become the subject of the Clint Eastwood film The 15:17 to Paris (starring Anthony and Spencer as themselves) — couldn’t return for undisclosed reasons.

After the pandemic, the style of play changed. The challenges were COVID-safe, and they took charter flights, which erased one of the defining features of The Amazing Race: The jockeying in airports to get on the right flight. Instead of equalizing flights or challenges, as viewers were so accustomed to, the first two teams got a 15-minute head start over the next two teams, who got a 15-minute head start on the fifth and sixth teams, etc. They also got rid of the extra challenge for those who finished last in non-elimination rounds, reasoning that a 15-minute deficit was apparently enough of an obstacle.

The way the race shaped up early on — before the pandemic — suggested that there were three teams that were clearly better than the rest. Raquel and Cayla, flight attendants who lost their jobs and had to move in with their parents during the pandemic; Ryan & Dusty, lifelong best friends (one of whom was wrongfully convicted of murder and spent 10 years in prison); and Kim & Penn, a married couple and Internet personalities, whom I assumed I would hate. They’re easily my favorite team now. You may remember them from this video, which went viral a few years ago:

But that brings us back to Arun and Natalie, a very nice father and daughter from Detroit who are also terrible at the Amazing Race. It’s not so much that they are awful in challenges (although, often they are); it’s that they can’t get around Europe to save their damn lives. Arun, who drives, can barely operate a stick shift, and Natalia, who navigates, can barely read a map, and so no matter how well they do with the tasks, they invariably get lost before finding the pit stop.

They have, however, been huge beneficiaries of non-elimination rounds. In the last seven rounds (of 9, so far), they have either finished dead last in a non-elimination round or second-to-last, and usually, they only managed to avoid last in those rounds by virtue of a colossal screw up by the last-place team. That includes this week, where they finished ahead of only Ryan and Dusty, who spent three hours finding a coin under one of thousands of rocks (they were saved from elimination by the last of the non-elimination legs, because every season needs villains, that title belongs to Ryan and Dusty this year). The only time Arun and Natalia arrived at the pit stop better than second-to-last was in the very first leg in the series, where they finished … third to last.

They’re very nice people — and surprisingly calm even as they are flailing — and while I can’t imagine any scenario in which they win in next week’s final, doing so would be the greatest upset in The Amazing Race history, as well as completely unfair. They’re already the first team ever to be completely eliminated to also appear in the finals, but to see them win after struggling in every single round would be … nonsense.


← We Don't Need Comedians Anymore. This AI Bot Is Way Funnnier | How to Actually Fix the Oscars →