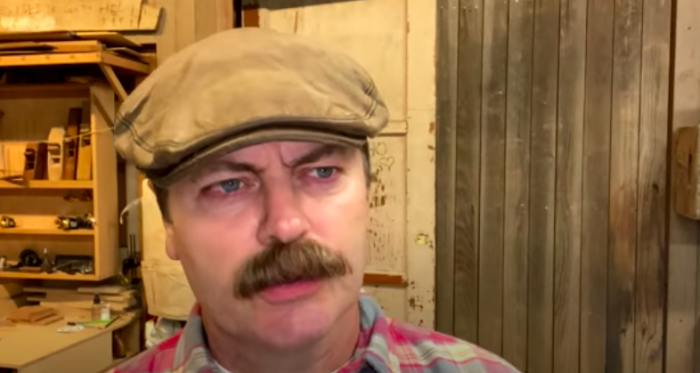 What's 'Parks and Recreation's Ron Swanson Been Up To?

Tonight’s the night! The Parks and Recreation cast comes together for a very special reunion episode, which will fundraise for Feeding America.

Parks and Recreation co-creator Mike Schur has brought a bunch of the beloved series’ writers and stars back into the fold for a new episode, which is set in the present day. Pawnee’s most dedicated civil servant, Leslie Knope uses video chat to check in on her friends in a time of social distancing.

In a newly released clip, Amy Poehler and Nick Offerman reteam for a scene that shows what Ron Swanson’s been up to.

Even in this brief bit, it’s heartening to see Poehler back in the saddle as the ever-hopeful Knope and Offerman back in his Swanson mustache. Bonus joy: It looks like Offerman shot this scene in his personal woodshop.

We’ve been talking a lot about the special, its plot, and who might appear. Now, let’s focus on its bigger purpose: charity.

Corporate sponsors State Farm®, Subaru of America, Inc., and NBCUniversal, as well as the writers/producers/cast of Parks and Recreation, are matching donations up to $500,000 combined. This money will go to Feeding America, which enables food banks to secure the resources they need to serve the most vulnerable members of the community during this difficult time.

Here’s how you can help: Donate whatever you can at www.feedingamerica.org/parksandrec between now and May 21st. The more Parks and Recs fans give, the more those bringing you this special will give. Together, we can combat food insecurity.

A Parks and Recreation Special airs tonight at 8:30 p.m. on NBC and will be available on-demand tomorrow.