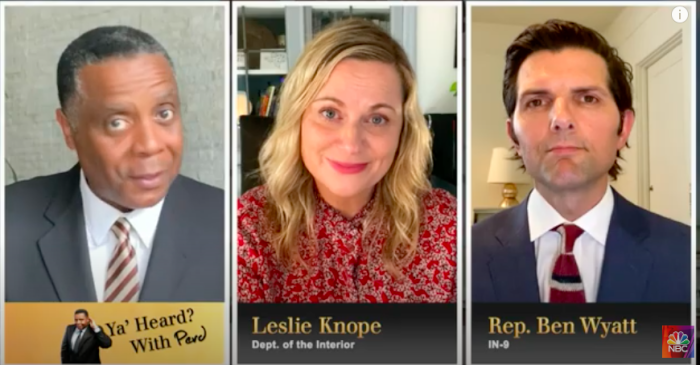 Our First Look At The 'Parks And Recreation' Reunion Special

Tomorrow night, the cast of Parks and Recreation will reunite for a very special reunion episode, which serves as a fundraiser for Feeding America. The show’s co-creator Michael Schur has reteamed with the celebrated series’ writers to pen a new half-hour episode that was shot remotely from the homes of Amy Poehler, Nick Offerman, Adam Scott, Aubrey Plaza, Chris Pratt, Aziz Ansari, Jim O’Heir, Rob Lowe, and Retta. Now, a TV spot for the Parks and Recreation special teases who else will join the fun.

Jay Jackson is back as Perd Hapley, the eccentric TV anchorman of Pawnee, Indiana. Plus, there’s a suggestion we’ll get more of the adored tertiary characters. The announcer in the spot proclaims:

Join the original Parks and Recreation characters. And we mean everyone!

Does that mean Ben Schwartz will be back as party boy Jean-Ralphio? Jenny Slate will reprise the role of Mona-Lisa “The Worst” Saperstein? Jon Glaser will return as Councilman Jamm? Billy Eichner will bellow once more as Craig Middlebrooks? Megan Mullally will pop up to menace and delight as Tammy Two? The Good Place’s Kristen Bell will smirk once more as Ingrid De Forest, while Jason Mantzoukas gives us that good stink as perfume impresario Dennis Feinstein?

We’ll find out when Parks and Recreation returns tomorrow night.

Plus, Schur is assuring fans that while this episode is set in the present, with Leslie Knope catching up with her friends through video chats, none of the characters will have contracted the virus. “We moved away from that quickly because I was terrified of seeming like we were making light of the most serious international crisis in 100 years,” Schur told THR.

“The whole special is not about the disease,” Schur explained. “It’s about people coping with it and navigating their daily lives. The most important theme of the show is: Leslie Knope believes in friendship. She was loyal and friendly and put all her eggs in the power of friendship. It’s about her connecting with people and holding that group of characters together at a time when they’re unable to leave their homes. That’s the running theme.”

The Parks and Recreation special airs Thursday at 8:30 p.m. ET/PT, following the Paley Center tribute at 8 p.m., on NBC.