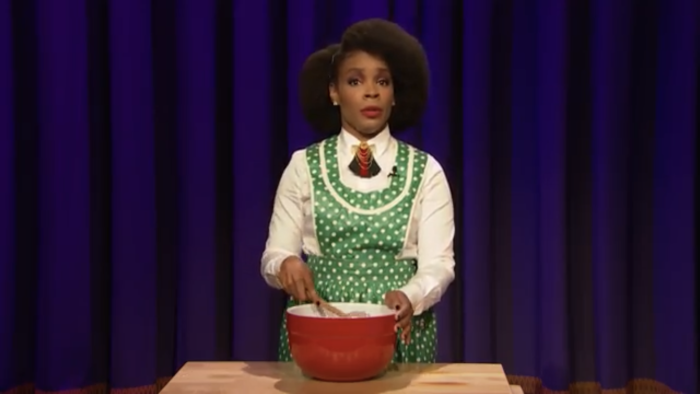 Amber Ruffin Celebrates 25 Episodes By Being Your Mom

Mother’s Day may be behind us but that’s no reason to stop appreciating all that moms do. Chief among their myriad abilities, they pass along knowledge. Sometimes that knowledge comes in the form of sassy hot-takes. That’s definitely the case when Amber Ruffin is your mom!

Amber, and her cohost Tarik Davis, dropped another edition of Your Mom’s Take, a recurring bit on her show. Boy oh boy is this a fun segment. That’s often the first thing that pops out to me about an Amber Ruffin Show sketch, the fun they’re having. It is undeniably infectious. They’re there to play and make people laugh. No matter how silly they get, you’re always on board.

It goes without saying at this point, but I’m gonna say it again dammit, Amber Ruffin and Tarik Davis are one of the best late-night duos ever. Their friendship permeates their onscreen relationship making them endlessly watchable. We should thank our lucky stars that we get to see them in this landscape even as said landscape changes rapidly.

One thing that hasn’t changed? The Amber Ruffin Show is still on! This was actually their 25th episode and that’s a lot of shows considering they only do one show a week. That’s 25 plus weeks of The Amber Ruffin Show gracing our television sets. I’ll happily be there for 25 more (and then several more after that, please and thank you, head of NBC/Universal. I wanna say Maxwell F. Universal? Does that sound right?)